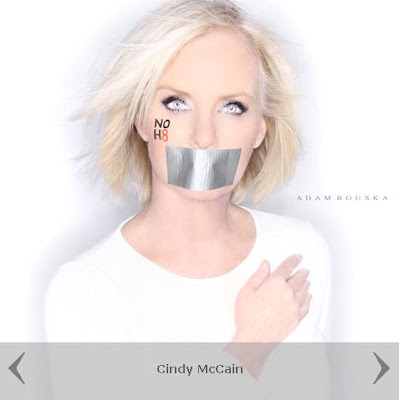 I stumbled across this site this morning and was very surprised by what I found. First I should tell you about the site in case you don't want to click through.

On November 4, 2008 Proposition 8 passed in California, amending the state Constitution to ban same-sex marriage. The defeat provoked a groundswell of initiative within the GLBT community at a grassroots level, with many new political and protest organizations being formed in response.

The NOH8 Campaign is a photographic silent protest created by celebrity photographer Adam Bouska (http://www.bouska.net) and partner Jeff Parshley in direct response to the passage of Proposition 8. Photos feature subjects with duct tape over their mouths, symbolizing their voices being silenced by Prop 8 and similar legislation around the world, with "NOH8" painted on one cheek in protest.

Nearly one year since its inception, the NOH8 Campaign has grown to over 2,000 faces and continues to grow at an exponential rate. The campaign began with portraits of everyday Californians from all walks of life and soon rose to include politicians, military personnel, newlyweds, law enforcement, artists, celebrities, and many more.

Not only was I really moved by the idea, but I was astonished to see Cindy McCain among the pictures and then Megan McCain later on, holding a silver elephant.

Honestly, though, this is all just bunch of hooey so that I could post that pic of Cindy. She totally looks like an alien doesn't she? What is up with her eyes? It's like they're going to turn into lasers any minute.