It's our first ever Tony Slam, y'all! I don't know why I've never watched the Tony's before. As Sean Hayes said last night, it's the World Cup of Showtunes and since I'm a showtune queen I just don't know how I've missed out all these years.

For the most part everyone looked pretty great. In fact, I think I can safely categorize just about everything into Awesome and Awful, except for maybe one or two. So let's begin! 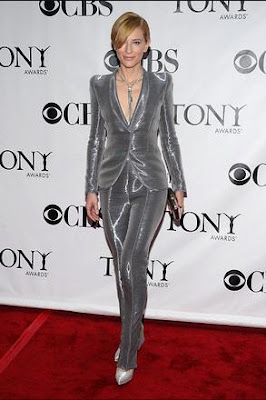 Cate Blanchett, looking like a freaking alien kidnapped her, wrapped her in foil so that the brain scan and probe wouldn't affect others, and then dropped her back on earth just in time to walk the red carpet. I think it's possible that she's looking at pics of herself from last night and thinking, "Damn those aliens!" 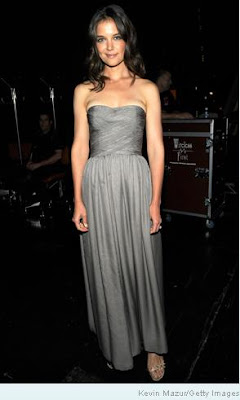 Katie Holmes. I'm going to risk alienating a few people but you guys - AWFUL. This dress doesn't fit and it doesn't fit every single part of her. The bodice should be bigger, the skirt should be longer and the waist should be far more forgiving. What was she thinking? Or, is this another example of her not thinking? 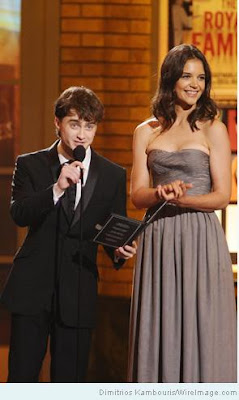 I love this picture because Daniel Radcliffe looks like a freaking hobbit standing next to Katie Holmes, which probably made Katie feel right at home. Get it!? See what I did there?! I implied that Tom Cruise was so short that he also looks like a hobbit when he stands next to her! HA! I rule! Ahem. Okay, fine. Moving on. 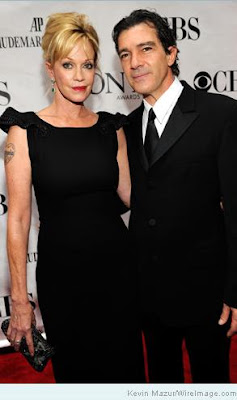 I've got five words for Melanie Griffith and they are: Ten Miles Of Bad Road. It pains me to say this, friends, because I was such a fan back in the day. Who didn't love Working Girl? The plucky and sexy secretary using her brains to get ahead while snagging the still-hot Harrison Ford into the bargain? Sign me up! I'm totally there! But this? It's like a cross between bad botox and old age. Her face appears to maybe be melting. And her mouth is sort of crooked. Awful. And I just realized that none of the above related at ALL to her dress. I guess that means that the dress was so underwhelming that I completely forgot about it. I don't think that's ever happened before. Which means it had to be awful, right? Right.

Next we have the very eloquently titled Meh Category: 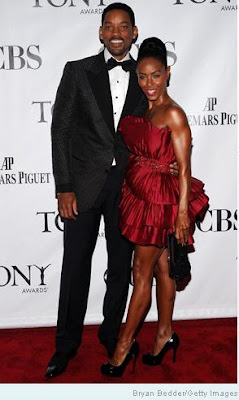 Jada Pinkett Smith, looking totally awesome except for not having a waist. What is up with people adding all this fabric to mid-sections this year? Her legs look a mile long and her shoes are beautiful but she also looks slightly oiled, like she's a walking protest to the BP spill in the gulf. I guess nervousness leading to sweat might also explain the powerful sheen on her body, but it's still kind of weird. Overall, I'd say she's a Meh. 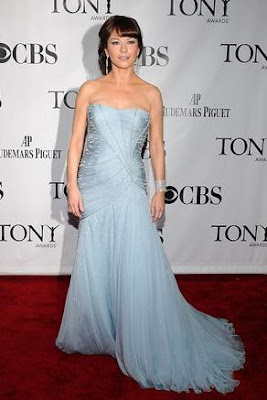 Catherine Zeta-Jones. This isn't all-out Awful, but it's just not doing anything for me. The color is okay, the cut is okay, and the skirt is okay (how can you ever go wrong with miles of tulle?), but overall I'm not sure about it. Maybe it's her bangs making the whole thing feel too heavy but she's sort of in a weird middle category - not awesome and not awful, just sort of... meh. 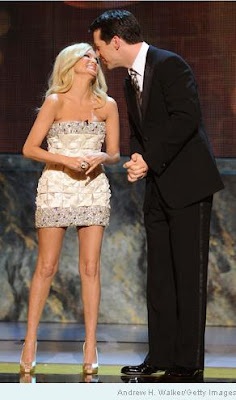 Kristin Chenowith, my darling, I really want to put you in the awesome category but I'm afraid I really don't love this on you. Your legs look fantastic and I love your hair. The dress, on the other hand, looks like it might be padded. Padded, I said, yes, you read that right. Why would your dress look padded? I dunno. You have an outstanding rack and you've completely obscured it from view with this weird, padded dress. It's not awful, but it's not awesome either. It's meh. 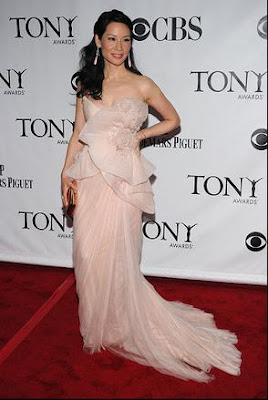 Lucy Liu, also falling into the Meh Category. I understand the desire to put on something ultra-feminine and lacy but dude, you have to know that when you strap an over-sized flower to your mid-section, the entire concept of being girly goes out the window! Because you no longer look very girly with no waist! It's not rocket surgery okay? 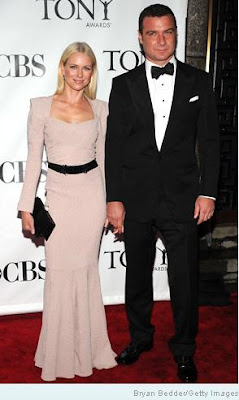 Naomi Watts, I love you but I am so torn on this! On one hand you look awesome, I mean, you've got two kids at home, both under the age of three and your bod is totally kickin. On the other hand, your shoulder pads are a little on the hostile side and seriously you couldn't have done anything with your hair? The next awards do better have you in something I can be proud of. Meh. 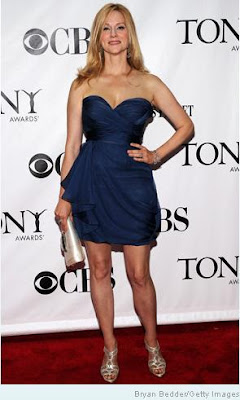 Laura Linney, looking pretty damn awesome. My one tiny little complaint is that the skirt is a perchance a bit too short for her. I'm not saying she's too old for such a short skirt (Hello, Jada!), but something about it just doesn't look right and I'm not sure what. Also, I'm not crazy about her shoes. They look slightly...what's the word...geriatric. Still, the color of the dress rocks, it's a really nice silhouette and I love her hair. Awesome. 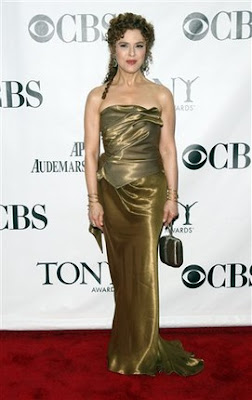 Bernadette Peters, the reigning queen of Sondheim Springs, the magical land where the music of the brilliant Stephen Sondheim flows from speakers 24/7, is looking quite magical herself. I don't think the gown fits her waist perfectly and I don't love that the top and the bottom appear to be two different colors of gold, but this is far from awful. Her hair and make up are great and her accessories are understated. Overall, she looks awesome. 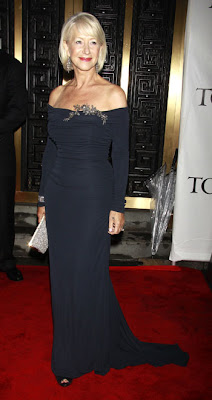 My hero and bestie (even though she totally doesn't know it), Helen Mirren, looking as awesome as always in this sleek navy blue (or is it black?) off the shoulder number that's gathered perfectly around her arms and waist. The finishing touch is that gorgeous off-center brooch that draws the eye down so that you can also admire her collar bones. Completely Awesome. Also, I love that her bag contrasts with the color of the dress, making the whole thing pop. 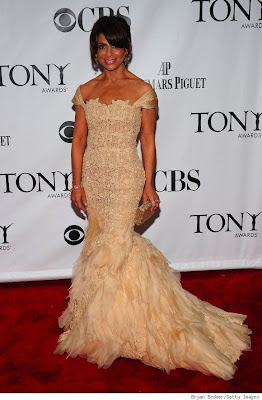 Paula Abdul, totally not bringing the crazy tonight. This is a great color, first of all, and second, it fits her properly. There's no gaping fabric allowing the less flattering parts of her to be seen. It's demure-ish but also a little devil-ish too with the fun feathery skirt. 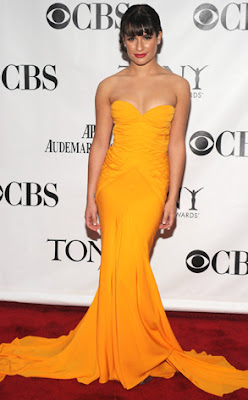 Lea Michelle, first runner up to Best In Show. Looks like her fashion missteps are over with and she's back to beautiful. I'm not in love with this canary yellow color (Tweety, anyone?), but it's certainly a bold choice and I can appreciate the cut and fall of the fabric. Pure Awesome on a Plate. 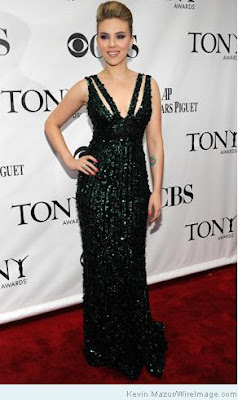 Best In Show - ScarJo, looking absolutely smoking hot in this dark green sequined gown. Girlfriend picked the right dress for tonight because not only did it look great on the red carpet but it also looked great when she picked up her TONY for best actress in a play. The cut in the straps makes it almost flirty which is good because otherwise it might have felt far too grown up and stuffy for a girl still in her twenties. Her hair is a bit stiff but I'm going to give her a pass. She looks totally awesome.

And that's it! The Slams are off for the summer but we'll reconvene as always in the fall for the Emmy's. Totally looking forward to it already.

Until then remember the three C's - color, cut and couture. Later, Possums!
Posted by Kate at 13.6.10

Great job, once again, your royal highness of couture. I wonder if Melanie had a stroke??

"Your Royal Highness of Couture"? I love it and will only answer to it from now on. Thank you, Joan, for coming up with the only nickname I'll ever need again.