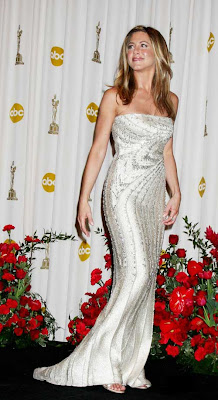 Not sure if any of you have been following this flap between Jen Aniston and Bill O'Reilly, so before I give you the latest, I'll recap.

Basically, Jen said something recently about the wonders of technology and how even though you might not be married it won't prevent you from having children if you're a woman who really wants them.

Bill O'Reilly got hold of her quote and, since Glenn Beck has sucked up most of his notoriety, fired back that Jen was encouraging 12 and 13 year olds to go ahead and get prego because they don't need a man in their lives and their children don't really need fathers.

So today Jen released this statement:

"Of course, the ideal scenario for parenting is obviously two parents of a mature age. Parenting is one of the hardest jobs on earth. And, of course, many women dream of finding Prince Charming (with fatherly instincts), but for those who've not yet found their Bill O'Reilly, I'm just glad science has provided a few other options."