Are People Really Going to Vote For This Witch?

Ha! See what I did there? Because, you see, she dabbled in witchcraft! Get it? 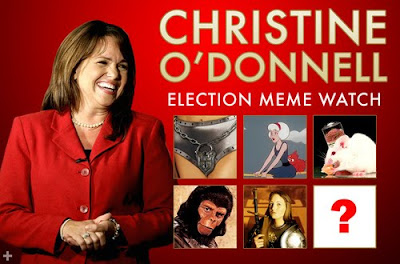 From deantrippe via Mike Mitchell:

Stay up to date with the Christine “X-TEEN” O’Donnell Election Meme Watch.

2. “I dabbled into witchcraft. I never joined a coven.” / “One of my first dates with a witch was on a satanic altar.” Politically Incorrect, 1999

3. “American scientific companies are cross-breeding humans and animals and coming up with mice with fully functioning human brains.” Fox News’s The O’Reilly Factor, 2007

4. “You know what, evolution is a myth.” / “Why aren’t monkeys still evolving into humans?” Politically Incorrect, 1998