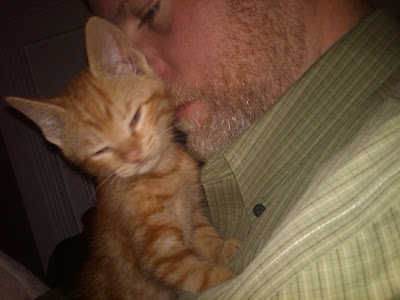 Taco is settling in nicely.

Trixie and Ari want almost nothing to do with him (more Ari than Trixie), but Fiona and he spend hours - HOURS - playing and chasing and wrestling and having a grand 'ole time. At night Taco splits his time between Fiona and us. Last night he slept on my pillow, curled up into the side of my neck. Hard to believe that a week and a half ago he was living on the streets of Plainfield.
Posted by Kate at 10.11.10

This ALMOST makes me want a kitten! I am so glad he made friends with at least one of the others. He is sure a lucky little guy and he obviously loves you all.

I love your new baby! So sweet!