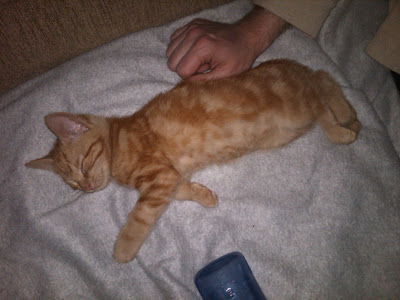 Taco is getting bigger every single day. We've had him for one month, which means he's about eight weeks old. He weighs 2.8 pounds (from 1.2 a month ago) and Fiona is still his best friend.

He spends hours and hours sleeping and then when he wakes up all he wants to do is follow you around and make sure you're not doing anything he can't take part in. I think he's going to be a lap-cat, which is nice - he'll be our first.

He does not like driving in the car, though. According to the Beast Taco was very unhappy on the way to the vet. Which isn't good becuase the next time he goes to the vet I'll be the one to take him. It'll be the claws and balls visit and Daddy is not cool bringing his boy in for that one.
Posted by Kate at 4.12.10