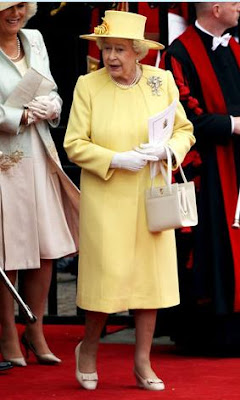 QEII, looking rather splendid in this buttercream yellow jacket and matching dress and hat. I didn't like that her triple strand of pearls was sort of only half visible. I wish she'd gone with either a choker or a longer string but such is life. The brooch is fantastic. The hat is rather ho-hum, though I'm sure that's exactly what she wanted it to be. She of all people wouldn't want to outshine the bride, which was more than possible since she is the freaking queen. And for a woman of her age I'm pleased to see that she's wearing teeny tiny little heels. I was expecting orthopedic corn-resistant, extra comfy uglies, but what she's got on are really kind of cute. 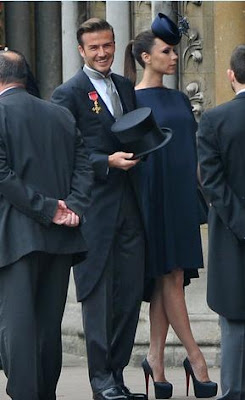 Posh and Becks. He of course looks quite dashing in his suit and tie (is that sort of tie actually called an ascot? I wish I knew). She on the other hand looks kind of freaky. The shoes look uncomfortable and her legs look rubbery which I suspect is from trying to find a comfortable way to stand while prego and wearing five inch platforms. The dress is very blah but the hat is really rather smart. It's kind of fun, actually. Sort of whimsically perched on her forehead like that. I have to wonder how they keep them on though. Once upon a time there were hatpins which a woman stuck through the hat and a big mound of hair. Since the hair fashions have changed I am really curious about what kind of glue they use to keep their chapeaus in place. 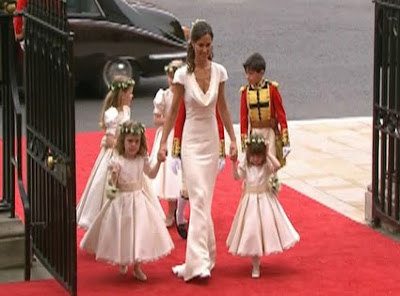 Pippa and the kiddies. Let's be honest here, they look so incredibly adorable. I can't figure out if Pippa is wearing white and if so I'm not sure I like it, but perhaps in Britain wearing white to someone else's wedding isn't a big deal. Also, I'm fairly sure that Kate chose the dress, or at least helped choose it so she probably wasn't upset by it. The capped sleeves combined with the plunging vee cowl neckline worked perfectly on her and the sleekness of the column was beautiful. The girl looks like she might be even tinier than Kate herself. 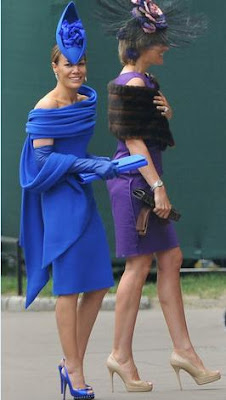 I forget who these two women are but I'm really digging their outfits. First the pop of blue is fantastic. The dress is marvelous and though the hat is a little weird looking (I kept waiting for it to take flight) I think it works on her. The woman in purple is also a stunner. The color is great, she's kept it simple with nude shoes and a fur wrap so that her hat can enjoy the sunshine of adoration which is so richly deserves. I love it. 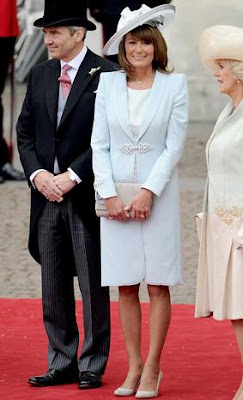 Carole Middleton, the bride's mother, looking demure in pale blue and a sweet hat. A little dull for my taste but mother-of-the-bride isn't supposed to wow people. She's supposed to show up looking lovely, cry a little, kiss her daughter and pretend to be happy with her new son-in-law. Carole looks more than up to the task. 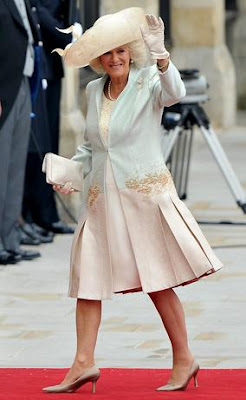 Andrew's girls, the Princesses Beatrice and Eugenie. I couldn't even begin to tell you which is which, so let's just go with Ugly and Beige, okay (these names apply only to their dresses, not their faces, though the teeth on Beige makes me think of hundreds of years of Hungarian inbreeding...)?

Ugly is wearing something from a very famous designer, I can't remember who just now, but that's okay. If I told you you'd probably never want to wear anything from them ever again. It's like a failed Impressionist painting on top with a plain blue skirt on the bottom. Definitely too many bows up the front. The hat is interesting I guess, but a little too pointed over her forehead, which makes the two tufts of hair on either side look even more drably brown.

Beige on the other hand is kind of awesome. I love the jacket, the smoothness of the line, the length, the pleated skirt underneath and the criss-cross pattern on her shoulders. It's fantastic. Also, the simplicity of the outfit allows the hat, which is also pretty awesome in a wedding-cake-gone-awol kind of way, to really shine. I sort of which is weren't on her forehead but I can live it with it I guess. Also, though I think she's got too much eye-liner on, I totally adore her shoes. 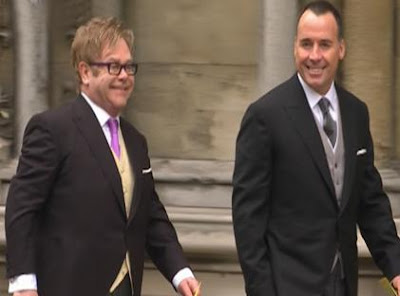 Elton John looks more and more like a middle-aged woman every time I see him. I've been thinking this for years and never said it out loud but LORD. I can't hold back anymore. He looks fine. I like the Easter egg colors of his vest and tie and I think David looks rather dashing in silver and gray. Maybe comb your hair next time, El? I dunno. 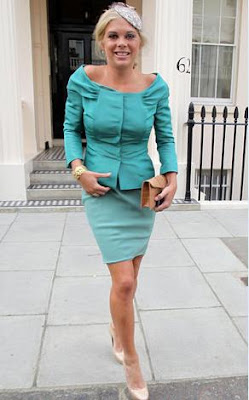 Chelsea Davy, Prince Harry's main squeeze is looking a little rough around the edges, no? I could be nice and say her outfit is ill-fitting or I could be mean and say that it looks like crap. Also, what the hell kind of hat is that? Did you find that in some antique shop and though you'd give it a go? If you ever wanna be in Kate's shoes you need to start making an effort, okay? 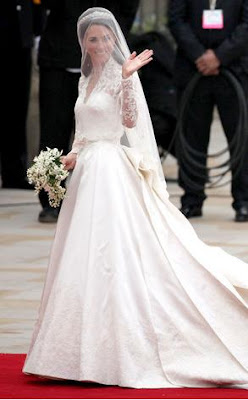 The Bride looking utterly lovely. I love the heaviness of the veil. I love that it's not all fluffy and puffed out but pressed against her. I love the cut of the dress, the detail on the lace, the vee of the bodice and the full skirt. She looks exactly perfect. 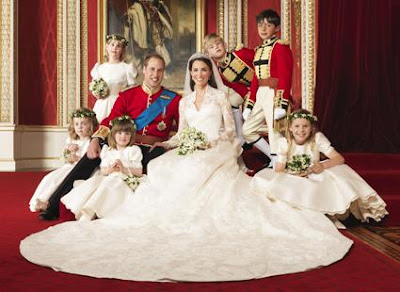 And one more of the happy couple and their attendants. Looking very happy indeed. 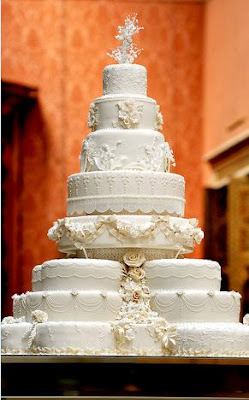 The cake. Beautiful and delicious-looking. Which is all you can ask for really.

And that's it. It's so rare to get a slam this time of year that it sort of threw me. I apologize for the delay and hope that my witty repartee was worth waiting for.

Email ThisBlogThis!Share to TwitterShare to FacebookShare to Pinterest
Labels: Slams

You do know that Posh Spice is 8 months pregnant, right?

I do, which is why I don't get why she wore those shoes? Sometimes it's okay to give in to comfort.