Yay! More dresses to slam! I love this time of year, don't you? Okay, so the Bafta's aren't great, mainly because of the dearth of pictures online. You'd think no one showed up at this thing given how many images I was able to scrounge up.

But whatever, I'm just happy to keep judging others. I'm going to continue on with the new tradition of not sorting, and instead shoot from the hip as they come at me. 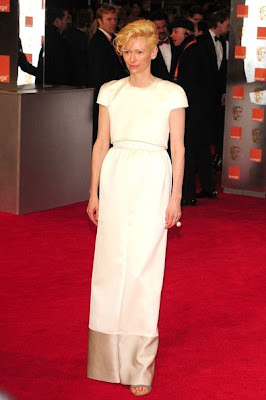 First up is Tilda Swinton, who can usually be relied upon to bring enough batshit crazy that you wonder if maybe you've scrolled down too far and somehow landed back in the Grammy's. Here she's fairly respectable if underwhelming in this white frock. I do take umbrage with her flock of seagulls, though. There's never any reason to resurrect something so insidiously awful. 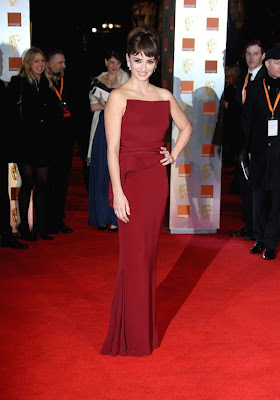 Penelope Cruz
I think I'd really like this if if it weren't so structured up top. The bodice has zero softness to it (or so it appears) and given what's under a bodice I think bodices should almost always be soft or have a very good reason not to be. Other than my issues with her chest this is fine. It's not unflattering, but it does its job. 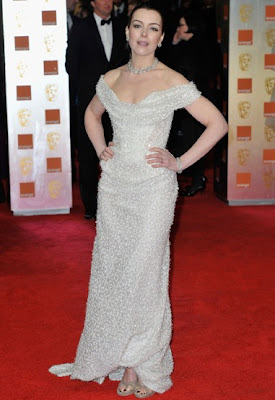 Olivia Williams
This is completely bang on (to use the Brit slang). It's not the kind of stark white I hate; the beads add a real flow and softness to the design. I love the straps and I love the subtle draping at her hips. She looks amazing. 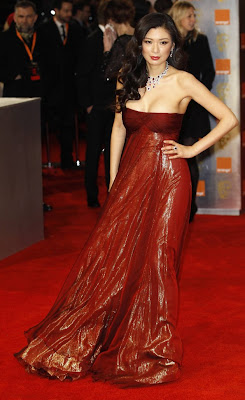 Michelle Yeoh
I like this in theory. I wish the cups had been a few sizes bigger (no one wants to see you flash the paps...except the paps, of course) and I don't love how wet the fabric looks. Still, her jewelry is great and it's a nice complement to the color of the dress. 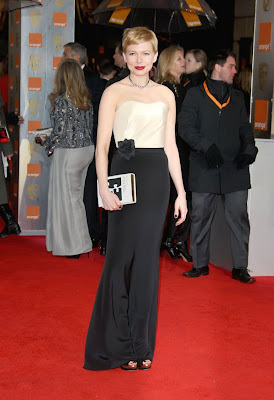 Okay, this is why I don't like two tone dresses. This is just so blah. It fits and it's flattering but there's nothing interesting about it and I think the reason the designer made it so boring is because it's already got two colors going and that's sort of a lot. Very disappointed. 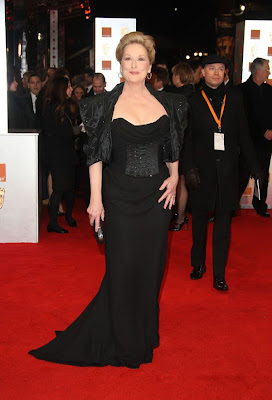 Meryl Streep
Regal as ever and justifiably so given her turn as that bastion of Right-Wing Horrors, Maggie Thatcher. I like this fine, but I'm confused by the shiny patterned stomach detail. It reminds me of one of Mrs. Hughes' dresses on Downton Abbey and dude, Meryl, that is not who you want me to be thinking of when I'm looking at you. 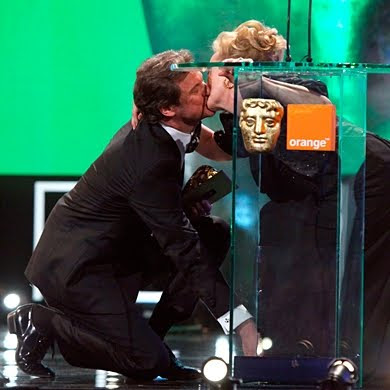 I do love this, though. Apparently, Meryl lost a shoe on her way to collect her award (no idea what they're called) and Mr. Darcy himself played Prince Charming by helping her back into it. His reward of course was a smooch. 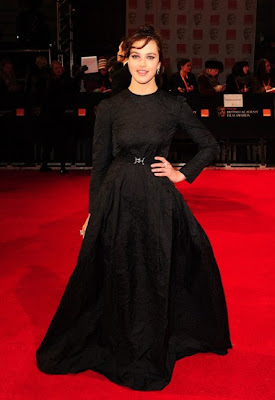 Jessica Brown Findley
Behold, the hottest of the Crawley sisters, decked out in someone's old Amish house dress. Seriously, Jess? Come on, please. You and I both know you could have raided the costume dept. and come up with something better than this. 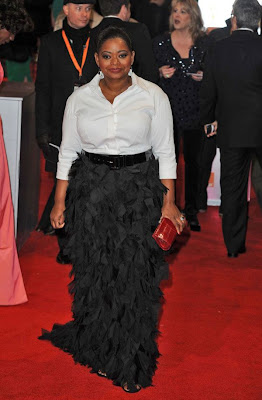 Octavia Spencer
I want to like this, but I really wish the skirt had been a bit poofier to offset the fact that the top is just a shirt a la Sharon Stone. And, it's not even a really fancy shirt, it's just a white button down and I'm sorry but I don't think it works. 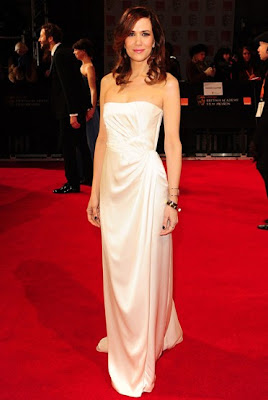 Kristin Wiig
This is awesome. I mean, compared to the halter/choker debacle that happened the last time we saw her, anyway. This is really pretty and it fits her and the gathers are so flattering. No one would mistake her for a bride. Well done, Kris. 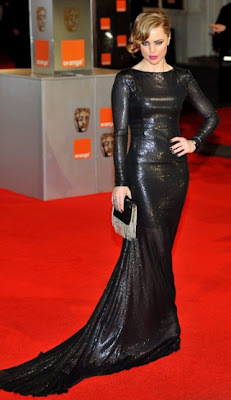 Melissa George
Do you guys think this is an unofficial audition for the role of Evil Queen/Sister/Wife/Daughter in Tim Burton's next film? The dress is great, there's no denying it, but there's something so sinister about it. I dunno. One tentative thumb up. 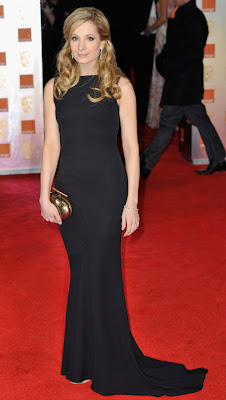 Joanne Froggat
Mr. Bates' lady-love is surprisingly underwhelming on the red carpet. It's fine, it fits and I don't hate it (and I DO love her hair), but it's not really doing anything for me. 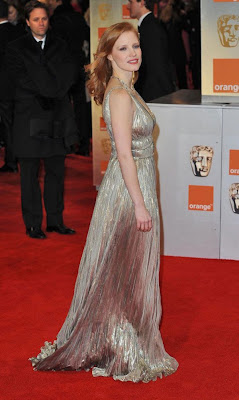 Jessica Chastain
This is awesome. The color is great, she looks amazing. Two thumbs up. 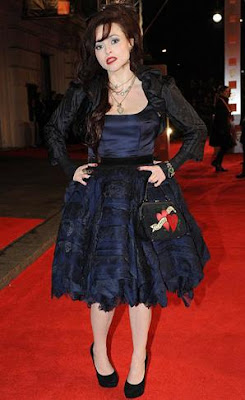 Helena Bonham-Carter
The Baftas wouldn't be complete without a little HBC Crazy, and this is tame as the crazy goes. 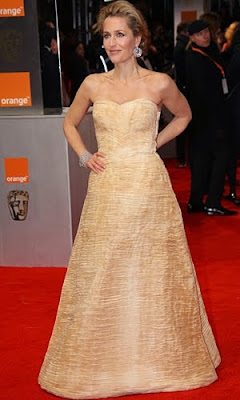 Gillian Anderson
Dana Scully herself is out and about. I wonder how old she is. X-Files has been off the air for a LONG time and she still looks totally amazing. She's gotta be pushing 50 by now, though, right? Anyhoo, she looks awesome. I like the design of this dress and I like that the designer chose for the lines to go east/west. It adds an interesting element that accentuates her curves. I also like that she's not wearing a necklace; when you've got collarbones like her, why not showcase them? 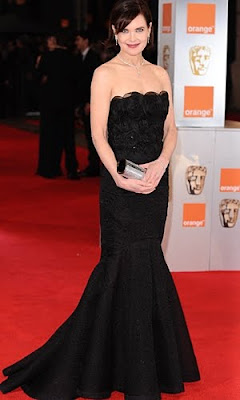 Elizabeth McGovern
I really love the scalloped top and I think those are rosettes on the bodice, which is nice. It's a nice change from just the basic black strapless dress. She looks awesome. 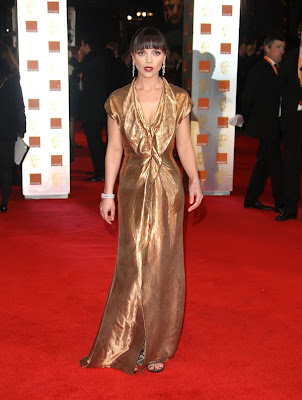 Christina Ricci
Seriously, can someone get this girl a sandwich? Okay, it's not as bad as it once was, but her chin is so pointy I'm really worried about the next person she hugs. As for the dress I like the color, I'm just a little confused about the the excess fabric over her chest. Is that a ruffle? A huge collar? I don't get it. 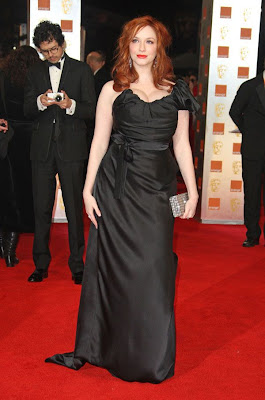 Christina Hendricks
I like this fine, but I wish she'd gone with an emerald green or sapphire blue or even a dark red...she looks so amazing in jewel tones and I just don't get why we have to sit through black. 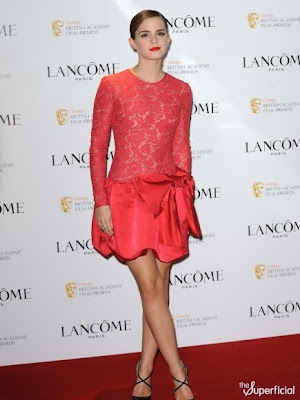 Emma Watson
How totally awesome is this? The color is awesome, it's age appropriate, it fits and it's flattering. I also love her still-short hair. her face is so feminine that the lack of long flowing locks isn't even noticed. She looks amazing. 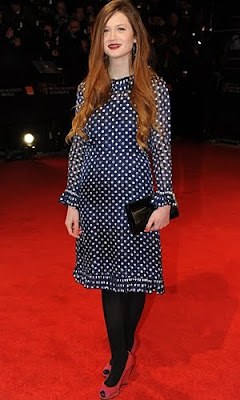 Bonnie Wright - Worst In Show
Good lord, Bonnie, just because HBC starred in the Harry Potters with you does NOT mean you need to start channeling her for red carpet events. What is with the sack dress? What is with the black tights paired with navy polka-dots. What is with bringing polka-dots onto the red carpet? Just say no next time and maybe give Rachel Zoe a call. She's in the States but I'm sure she could hook you up. 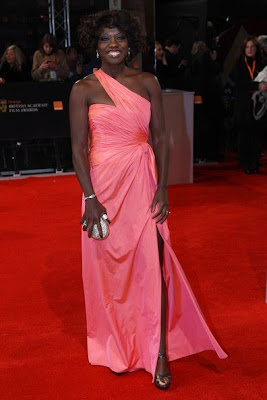 Viola Davis - Best in Show
The rumor is that this dress is made out of recycled bottles, which I think is utterly amazing. Not only is it environmentally friendly, but it's cut and fit are perfect for her. The single shoulder strap is fun and the skirting is just open and billowy enough to be romantic yet age-appropriate. Love it.


And that's it, lovies. Can you believe how few pics there were to throw up here? Makes me a little sad. I mean, I know perfectly well that the entire cast from Downton was there (or, I'm guessing they were, anyway), why can't the damn Internet put up pics of them?

It's disgraceful, is what it is. But take heart; the Oscars are coming! Until then, stay warm and avoid horizontal stripes!