Hello and welcome to another Slam!

I wasn't actually going to do a Tony Slam because there are quite a few things going on that have kept me fairly busy, but I can't refuse a request so off we go!

In keeping with the new tradition, I'm not going to separate them into good, bad, and horrible, I'm just going to shoot from the hip and call 'em as I see 'em.  Let's hope that works out for us, okay? 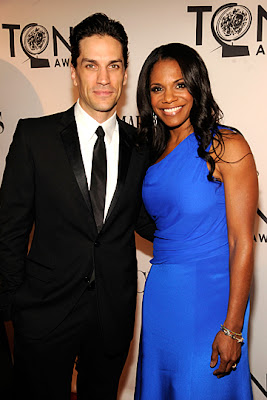 Audra MacDonald
I love this woman, okay? I think she's the best thing since sliced bread. Now, although I can't see the whole dress, I can say that I love the color on her, and it's not the kind of chiffon that wrinkles with sitting because her midsection looks delightfully smooth.  Her hair and make up are understated and though I would have liked for there to be maybe a LITTLE color on her lips, I'm not going to quibble. 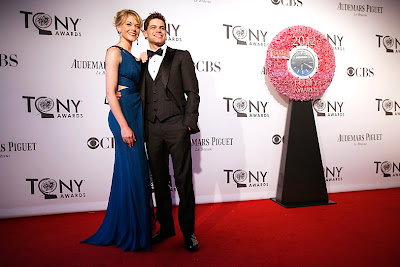 Ashley Spencer
This isn't a great picture but from what I can see I love the color, it totally works on her, the dress fits really well and the cut-outs are tastefully done. Her hair, make up and jewels are also really lovely. I don't know who she is but I like it. 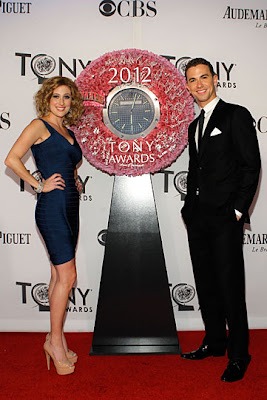 Caissie Levy
Maybe it's just me but this seems a little "Summertime Movie Premiere" to me. There's no fancy, floor-length dress, no special hair-do, no real glamor to be found.  Even her shoes are boring. Color me disappointed. 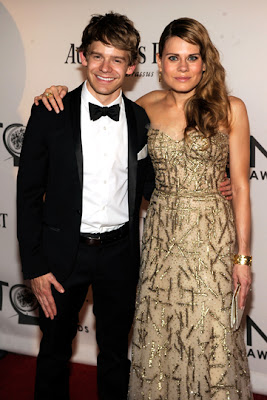 Celia Keenan Bolger
Honey, allow me to pass on some wisdom I have picked up in my many years on Earth. Stand up straight, shoulders back, chin up. I know you're worried they'll fall out if you give them an inch but sometimes that's what life does. You're going along, doing fine and then suddenly the girls fall out of a strapless.  It's not the best thing in the world but, hey, it's not the end of the world either, and hopefully, a lesson can be learned.  What's the lesson you ask? Get a stylist, I reply. The dress is really nice but you look so uncomfortable in it, you might as well have bought it off the rack at a post-prom sale at Macy's. 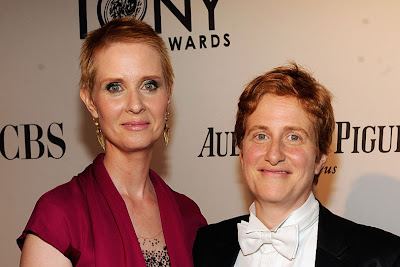 Cynthia Nixon
She just hasn't looked right to me since she went blonde after Sex and the City.  And I know she's growing it out after having shaved it off for her role on Broadway, but for real, I'm ready for her to start looking pretty again. 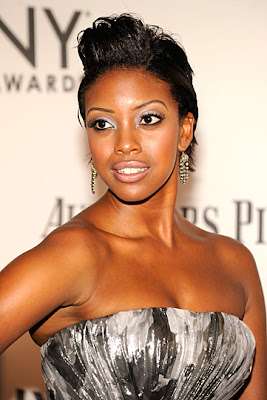 Condola Rashad
I'm pretty sure this is Mrs. Cosby's daughter (since Mrs. Cosby was there too and they have the same last name), and I must say, Mrs. Cosby makes pretty children. I couldn't find a full pic of her but I like the bodice which is good.  It looks to be well-fortified, leaving no room for the girls to accidentally fall out.I'm not in love with her eye make up, though. It's a little too Nicki Minaj for me, but I won't flunk her for it. 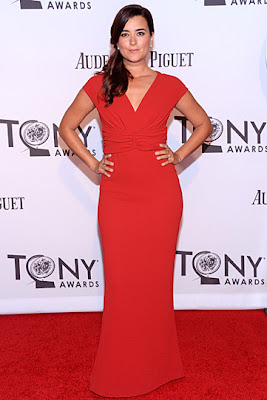 Cote de Pablo
It's a good thing this dress is red or I'd be asleep right now.  There's nothing remotely interesting about it.  It's not cleavagey, it's not too tight, it's not strapless, it's just very much a dress you could wear anywhere.  Maybe that's why it's boring.  If you hemmed it you could totally wear that to a dinner party, or shopping with friends. 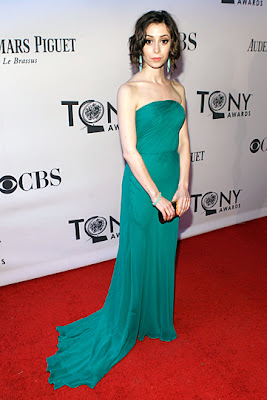 Cristin Milioti
Maybe it's the angle of the pic but this dress doesn't seem to be terribly flattering.  It cuts her waist in a very wrong place and she seems to be thinking to herself, "Dammit, I knew this wasn't a good idea." 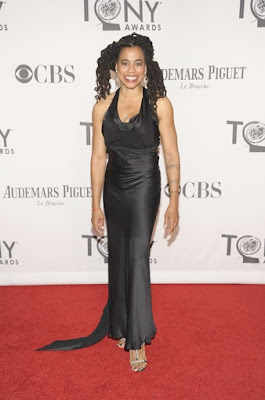 Da'Vine Joy Randolph
I want to say this dress is divine, but I can't.  Her belly seems to be the only place where the rouching is.  What's up with that?  Also, is that underwear popping out of her top or is it just more dress?  I am both puzzled and distracted. 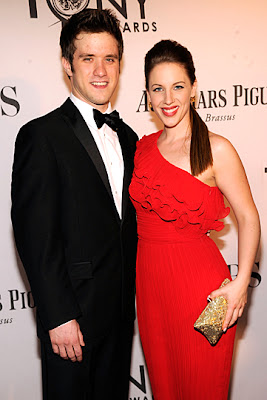 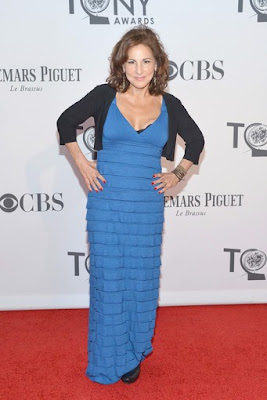 Kathy Najimy
Did you get sidetracked on your way to your nephew's graduation barbeque?  The little sweater-shrug? Yeah, I have one of those, too. And the full length sun-dress? Yep, it's in my closet as we speak.  So I guess my question is, are you shitting on us the viewers or the entire Tonys production as a whole?  I'll wait while you think about your answer.  Also, the black bra popping out of your dress?  Classy. 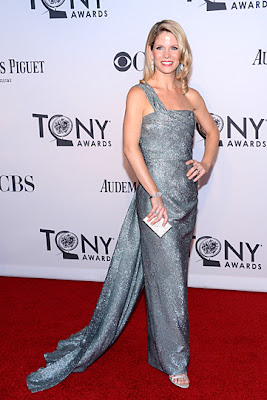 Kelly O'Hara
You guys, I love me some Kelly O'Hara. I just want to get that out of the way so that when I gush you can appropriately accuse me of favoritism. Seriously, though, I really like the dress.  It is the exact level of fancy you'd want for an event like this (I'm looking at you, Najimy)  The train is a bit much but hell it's the damn Tony awards!  Also, her forehead is a trifle shiny but she was probably sweating just a bit under the lights and flashes. I'll give her that. 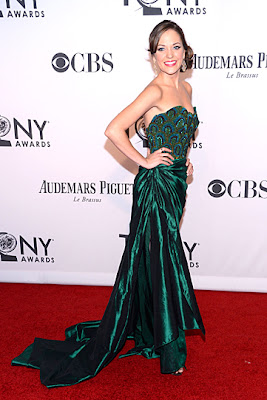 Laura Osnes
I'm not really sure what to say about this. I really like the color and I like the shiny material and I like the peacockiness of the bodice, I'm just not sure I like them all together. In any event she looks really happy and pretty (if a bit thin (have a sandwich, Laura!)) so I'm going to let this one fly. 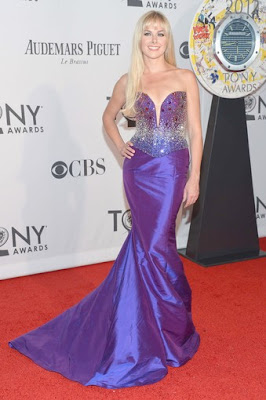 Laura Bell Bundy
I was thinking the other day how hard it must be to break into a career in showbiz when you've got a last name like Bundy. No wonder she added the "Bell", huh?  Talk about trying to differentiate yourself from what we already know about Bundys (Ted: killer; Al: loser). The dress is a bit too close to "ice dancer" up top for my liking but the swish at the bottom makes me happy so we'll let it slide this time. 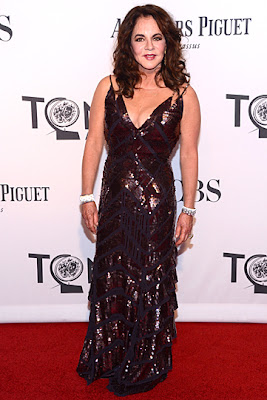 Meanwhile, Stockard Channing looks like she's going to beat you up behind the dumpsters after school if you look at her crosseyed. I'm not in love with the dress but it's appropriately shiny and well-designed.  I think it's the criss-cross black that I don't care for. I think it could have just been the brown sequins and I would have been happy.  Still, I like her make up and hair and while I don't get why she's wearing non-matching clunky bracelets, I'm going to say "c'est la vie" because I like my teeth where they are and word on the street is she throws a mean left hook. 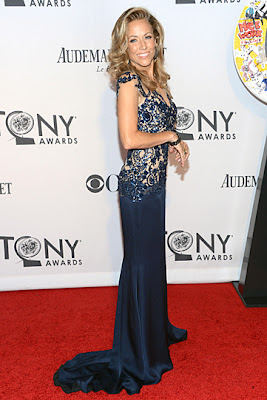 Sheryl Crow
This is a toughie. From this angle I was again in the "have a sandwich!" camp. Also, ice dancer up top, regular dress down below.  Pretty but been-there done-that. 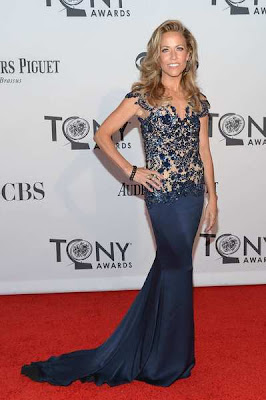 From this angle I want to rescind my "have a sandwich" advice and reinforce the ice dancer accusation.  I do not care for this dress. 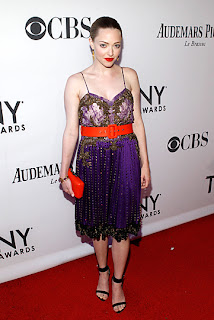 Amanda Seyfried
Seriously, girl, he broke up with you YEARS ago. It's time to build a bridge and get over it.  Dressing as a cry for help isn't going to bring him back, it's just going to make us pity you and you are WAY too pretty to be pitied.  Also, who told you it would be good idea to match your belt and your lipstick?  No one?  That's what I thought. 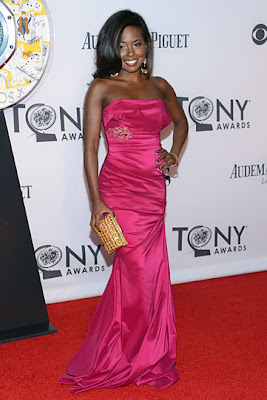 Adrienne Warren
Let's just be real here, she looks amazing.  The color is perfect with her skin and I love her little contrasting clutch. The wrap of the fabric is very feminine and the little bejeweled applique is perhaps oddly placed, but still quite nice.  Love it.

The only thing left to say is, "Where the hell was Cheno?"  Is this the first time in ten years that Kristin Chenoweth wasn't at the Tonys?  I am flabbergasted. Utterly. The space time continuum seems to be sucking all the air out of the room.  Or something.

Is it possible she was there but no one took her picture? Doubtful, right? I unfortunately missed the show (totally forgot. I know.  I know!), so someone out there will have to tell me if there was a Cheno sighting.

And that's it, Possums.  Until Emmy season, I bid you adieu. Steer clear of horizontal stripes and have a sandwich everyone once in a while.