I've been utterly wrecked at home and at work so I apologize for the delay on this, our annual Sag Slam.

Did you watch?  Were you as excited as I was?  The dresses were SO much better than the ones at the Globes!  Honestly, the Globe Slam was as boring as the dresses, which I discovered when I attempted to re-read it.  Not so with the Sag Slam!  Are you ready?  Let's go! 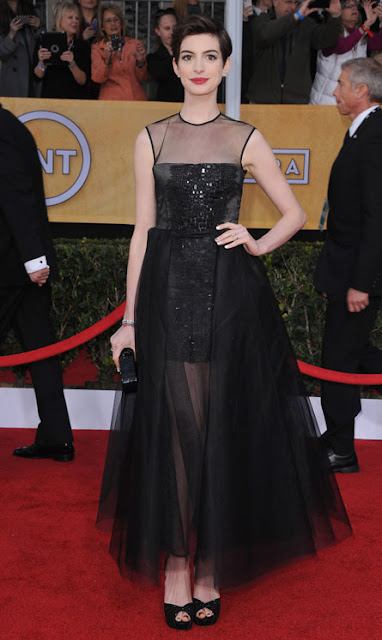 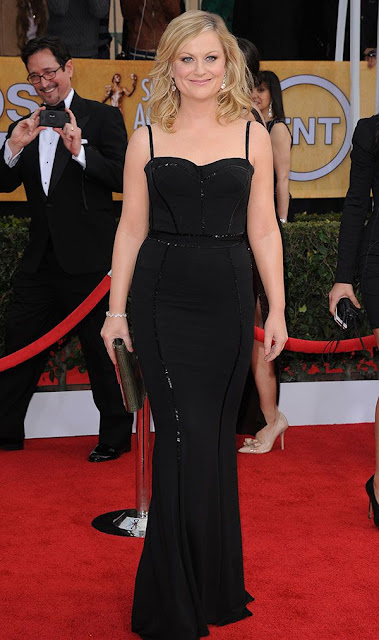 Amy Poehler
This is quite a few steps down from her glammy Old Hollywood look from the Globes.  I like the sequins which are judiciously placed but the whole thing is just kind of dull.  Her hair and make up are good, though.  I'll give her that. 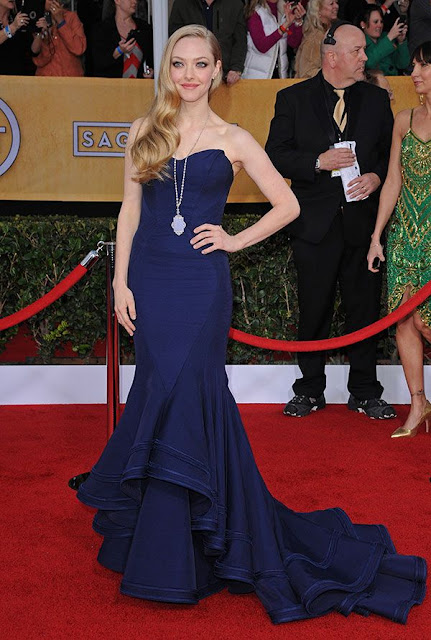 Amanda Seyfried
Look who took what could have been another boring strapless column gown and added some much-needed layers and a big ole necklace to spice things up!  I'm not a huge Amanda fan (though I will always cherish her performance in Mama Mia) but I have to give her full marks for this.  Also, extra points for wearing her hair long but making sure it was smooth and not all up in her face. 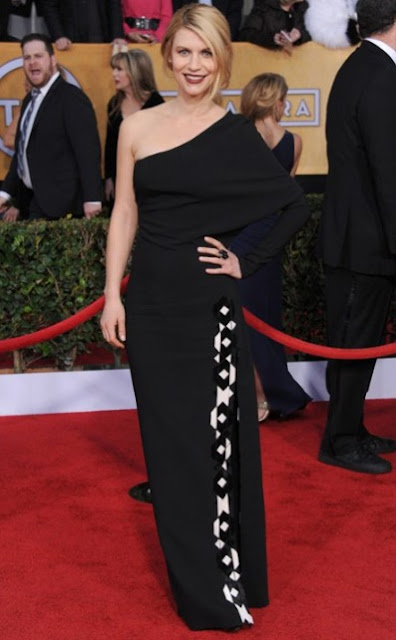 Claire Danes
Another interesting choice from Claire.  I don't love this (where is your waist?) but I can see what they were going for and I can respect the effort.  I like the bits and bobs of white down her leg and I like the one-sleeved look.  Her hair, make up and jewelry are subtle and really well done.  Go, Claire! 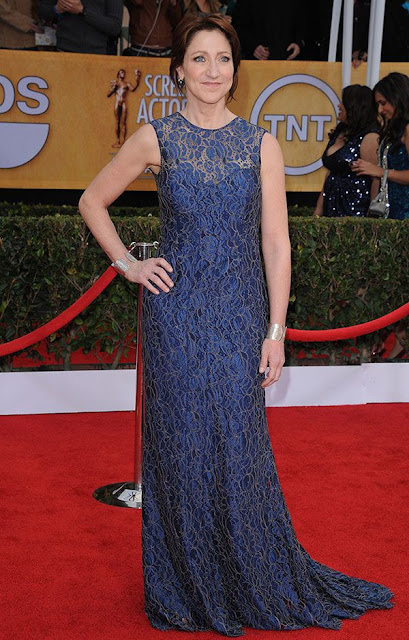 Edie Falco
First, wherefore art thou blonde locks?  Brown hair sort of makes you less you, Edie.  What happened?  Second, This is VERY reminiscent of the walking doily that was Nicole Ritchie at the Globes, but for some reason, I hate it less on you.  Is it because it's not really full-on lace all the way down?  Is it because the color is FAR better?  I'm not sure.  I don't particularly love the matching Wonder Woman bracelets, but I guess I can live with them. 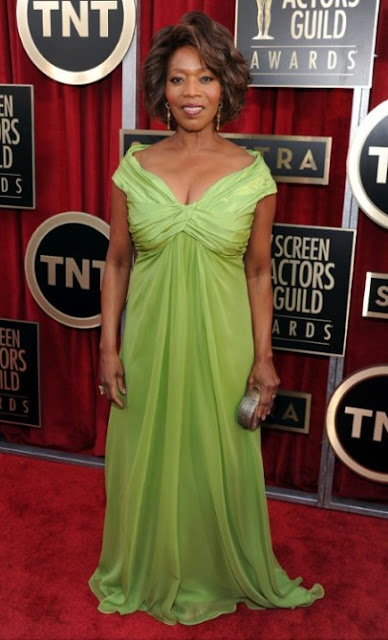 Alfre Woodard
Oh, how I love Alfre.  She's been in just about everything worth seeing and she never fails to deliver GREAT acting.  Her dress, though, needs help, I think, I just can't decide where.  The color is good and the cut is good, I think.  The wrapped shoulders are very pretty and feminine.  The bust seems like it maybe isn't getting the support it needs.  I think that's it.  I think maybe the boning in the gown isn't delivering the way it should.  Which makes me sad.  Maybe next time, Alfre. 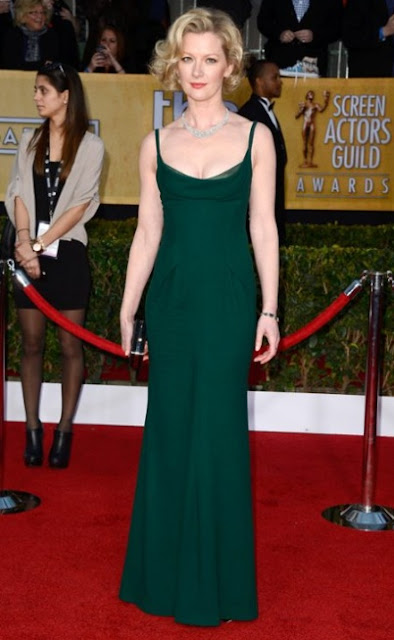 Gretchen Mol
Is it just me or have you seen bridesmaids in this dress?  Not that that makes it no good, I just feel like I've seen it on the David's Bridal website before.  I'm not sure I like the pleats at her hips, but the color is really great and her hair and jewelry are super.  She looks good. 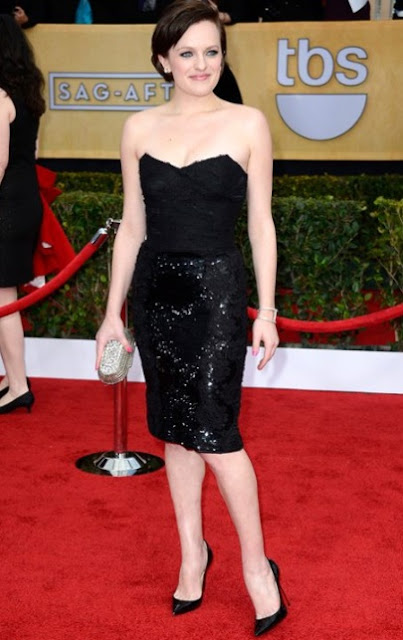 Elisabeth Moss
Okay, I just started watching The West Wing on Netflix and I'm having trouble reconciling Zoey Bartlett with Peggy Olson.  Kind of in the same way I'm having trouble reconciling this outfit with either of those fictional characters.  You know I'm the first to jump on someone if they're not giving a formal occasion the respect it deserves.  But.  I have to say I don't hate this.  It's knee length and it's sequin-y.  She's clearly put some thought into her hair and and make up and she's been burned before on the big dress (Mamie Eisenhower, anyone?).  I think she looks fab. 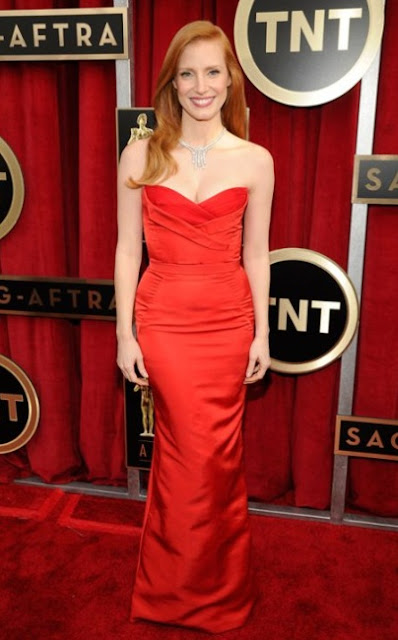 Jessica Chastain
First, this doesn't fit her.  Anytime you've got pulling across the hips like that, it means there isn't enough fabric to do the job you're asking it to do.  And, I mean, she's a tiny woman.  She's clearly pulling her "weight" in the who's-the-skinniest-actress-you've-ever-seen category.  I like the color, I sort of like the cut, I just wish it had been cut to fit her body. 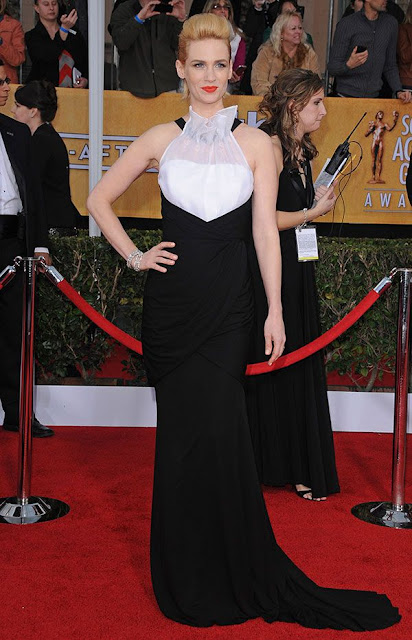 January Jones
I really thought I'd hate this, but I really don't.  Weird, right?  It's sort of like a tux for a lady.  She's not all falling out of her gown (like some I could mention), the halter strap behind the white gauze is really delicate and lady-like, and though her hair is a bit high and her lipstick a bit orange, overall I really like this look. 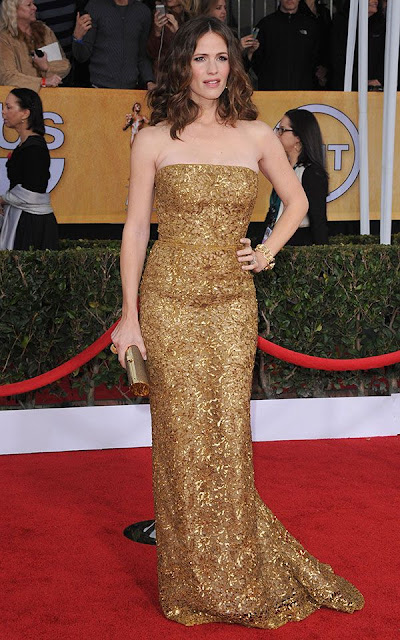 Jennifer Garner
This could have been the sun to Helen Hunt's moon, if only it had fit her properly.  Even the expression on her face is like, "Damn.  The spanx aren't enough.  Why did we have wings in the limo on the way over?"  I love you, Jen, but Rachel Zoe seems to be falling down on the job. Jennifer Lawrence
Sigh.  Didn't she read the Globes Slam?  I am not in the market for boring strapless column dresses, even if they do split apart and then come together again seamlessly.  The color is good, but I'm just not feeling it.  This is a dress for a much older actress.  Someone boring and staid.  Anyone but the lovely and talented J-Law. 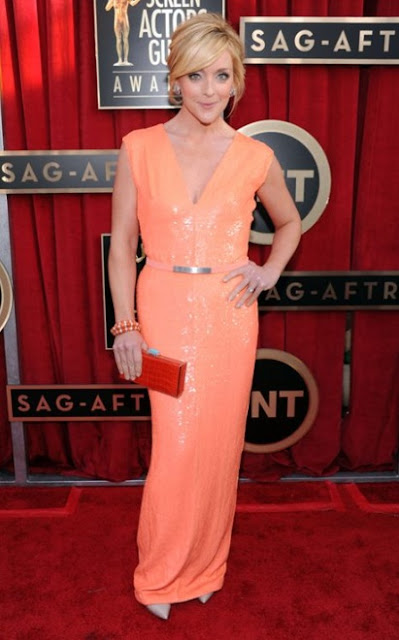 Jane Krakowski
Okay, first, I really like the cut of this dress.  It's simple and rather traditional but definitely not boring.  However, I'm not sure I'm in love with the coral color.  What with her tan and all, it matches too closely her skin color in some places and the first rule of event-wear is that you should complement your skin-tones not match them.  If she'd chosen a dress the color of  her clutch, I would have been very happy. 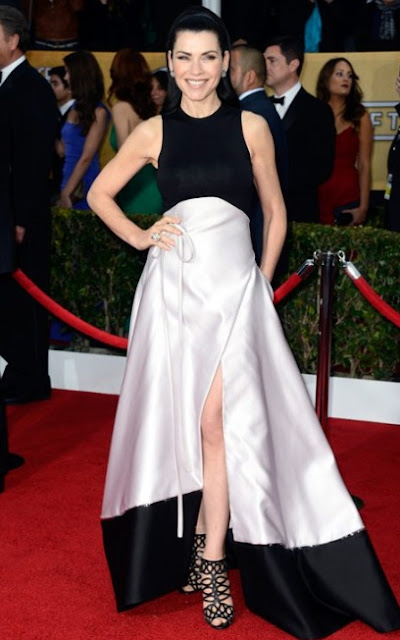 Julianna Margulies
HOLD THE DAMN PHONE!  She finally wore a dress that isn't hideous in every way.  She's showing on her waist!  It's got interesting lines!  I could do without the bow which seems gratuitously girlish, but otherwise, I am beyond excited to pull Julianna off my own personal Perpetually Worst Dressed List.  She should be smiling. 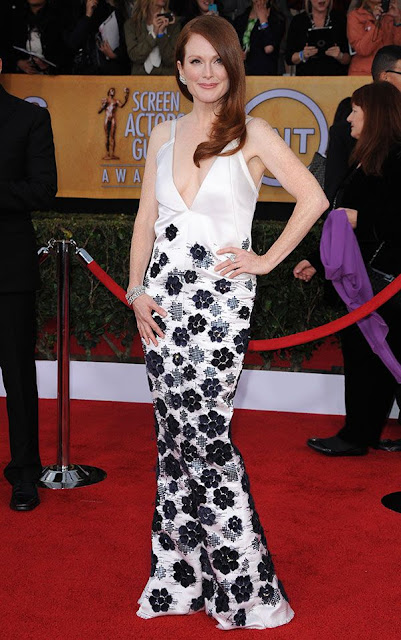 Julianne Moore
Another really interesting design. It's not my favorite from the night but it's really good.  The flowers are nice, the bodice is a little too much maybe but she's really working it.  Great dress. 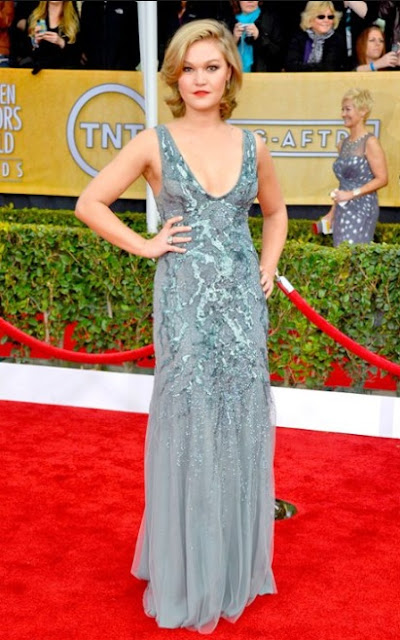 Julia Stiles
Another awesome dress!  I love the color.  I almost love the design!  I'm not sure about the bodice but I can live with it.  The marbled sheen and sequins adds a delicacy that bumps it up a notch.  Great look! 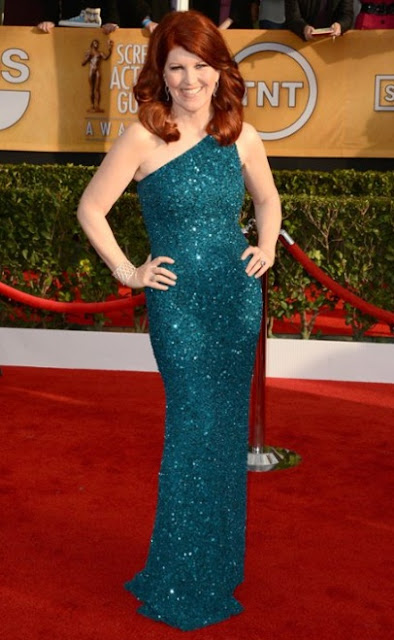 Kate Flannery
I think she's the only Office worker I threw in here because the others were so abysmal.  LOVING the color on her, especially against her red hair.  Loving the cut of this dress, the glam sequins, the jewelry, the hair, everything.  She looks like a movie star. 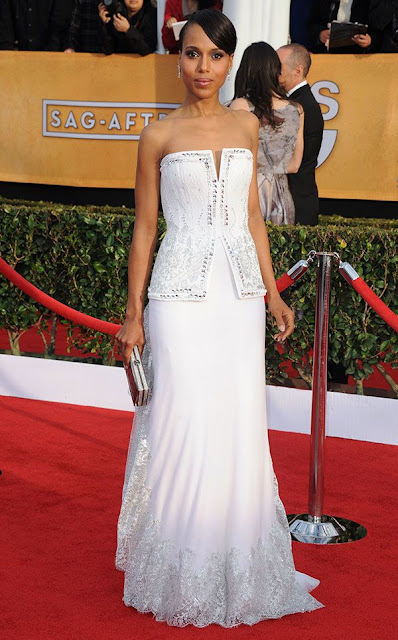 Kerry Washington
This is really unfortunate.  The corset thing eliminates her waist and adds what seems to be a lot of heaviness to her body. I don't mean she looks fat, I mean it looks like she's carrying around a lot of heaviness.  Like the dress must weigh a lot and it doesn't look comfortable or flattering. 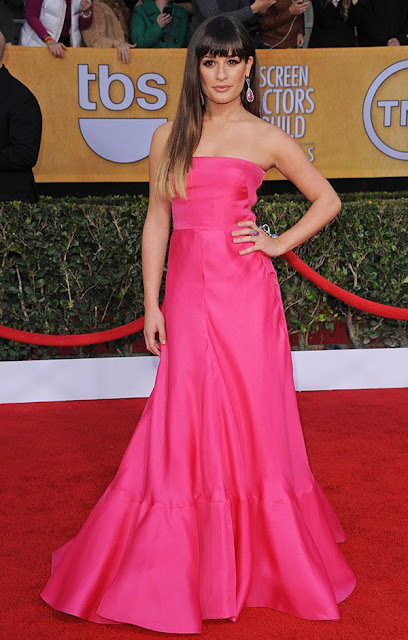 Lea Michele
I would write about how boring this is but I just fell asleep. 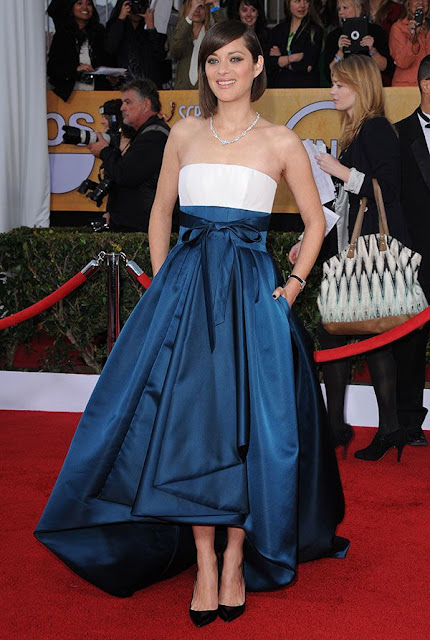 Marion Cotelliard
I know it's unorthodox and really different but aside from the massive bow I'm really loving this!  I like the raised hem just in the front and just to her ankles.  I like the bodice which is extremely modest, and I love her hair and jewelry.  Excellent choices all around! 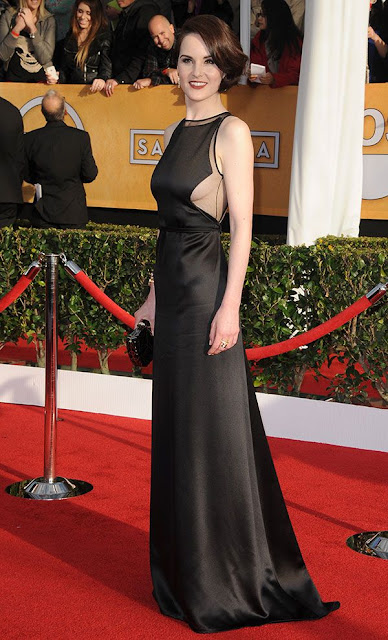 Michelle Dockery
Where on earth has Lady Mary gone?  Za-za-zing!  She's turned a fairly modest black a-line into a steaming pile of hot with just a little side-boob and netting.  And given all the other exposed boobs from that night I can't even fault her for it.  What's the difference if it's front or side?  I don't think there's any.  Good for you, Michelle.  Carry on. Naomi Watts
I'm not sure I like the brocadiness of the fabric, and I'm really sick of all these strapless column dresses but overall she looks pretty good. 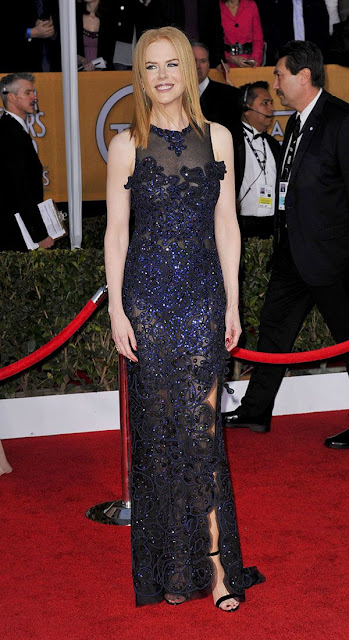 Nicole Kidman
I don't not understand this dress.  What is with all the weeds coming out of her bodice?  Is she just wearing a pair of big, black granny panties under there?  Why would anyone advise her to do that?  Also, and no offense, but her hair looks fake.  It looks like she's wearing a wig. 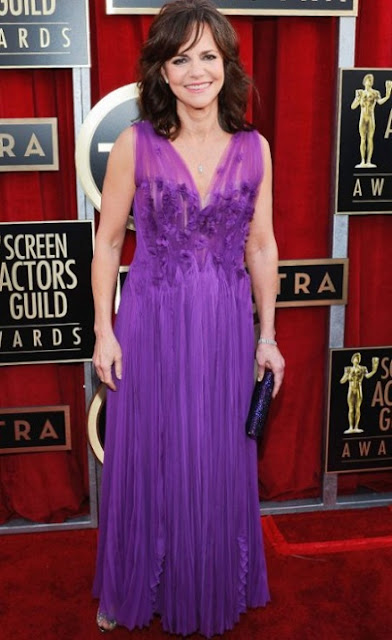 Sally Field
Great color, great cut, awful appliques on the bodice.  Talk about adding weight to yourself.  Sally is already a pretty tiny person, so I don't get why the designer would do this. 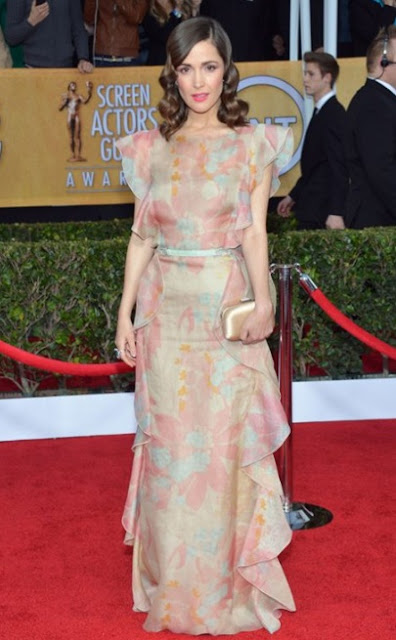 Rose Byrne
Please stop taking fashion advice from Chloe Sevigny.  If Bridesmaids taught us anything it's that you are an incredibly beautiful woman and you look great in formal wear.  This looks like someone's couch from the 80s was cut up and then, rather than stopping with something ugly, they added additional ruffles to make it even uglier. 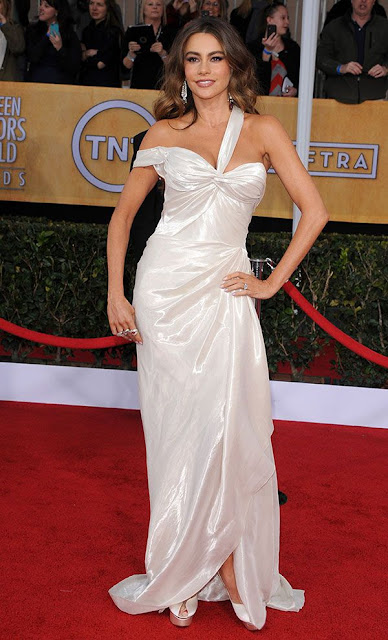 Sofia Vergara
Looks like someone listened to my pleas for thinking outside the dress box.  We've all seen this dress before but I don't think I've ever seen it in white and she is really, seriously pulling it off. 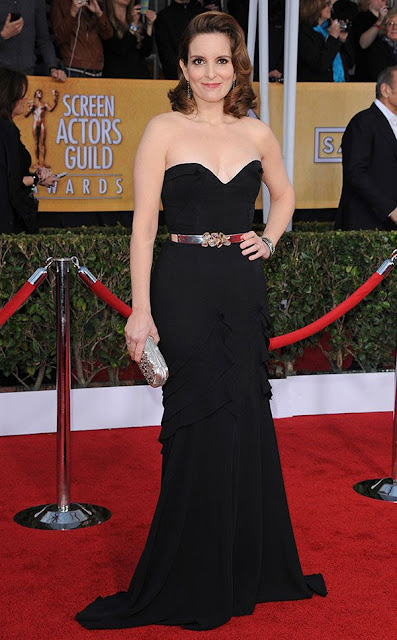 Tina Fey
It's not enough you went with boring strapless, Tina, you had to do it in black?  Come on!


And now the moment you've all been waiting for. 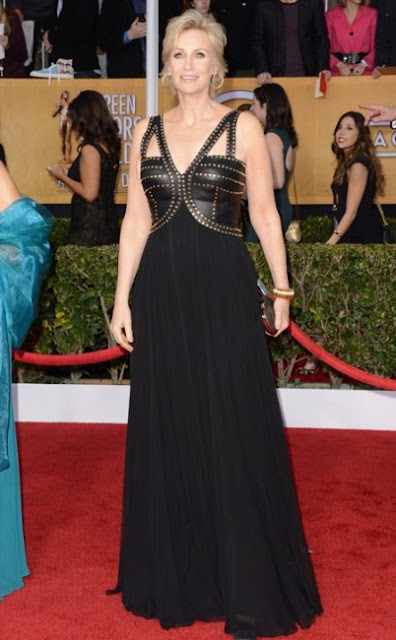 Jane Lynch
Any minute now she's going to bust out into an opera about Vikings.  Wait for it...wait for it...  This actually seems like such an obvious choice that there wasn't any real suspense, right?  Sorry for that.


But now, the REAL moment you've all been waiting for:

I've never done this before but I've added a category:

BEST IN SHOW RUNNER UP: 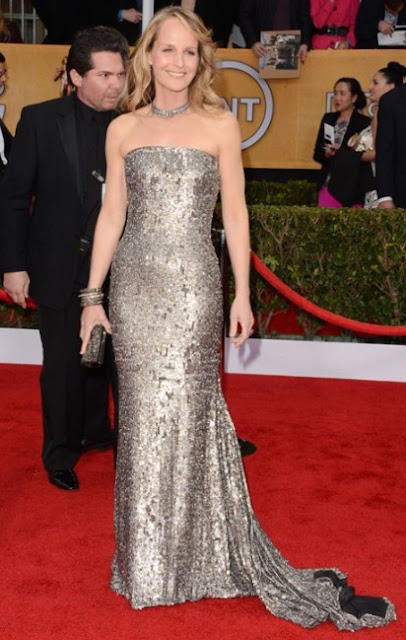 Helen Hunt
Gotta say, loving this immensely.  The color is great, the train looks weighty and shimmery, her jewelry is fabulous. and the dress clearly fits her.  Full marks.


And now, for the actual BEST IN SHOW: 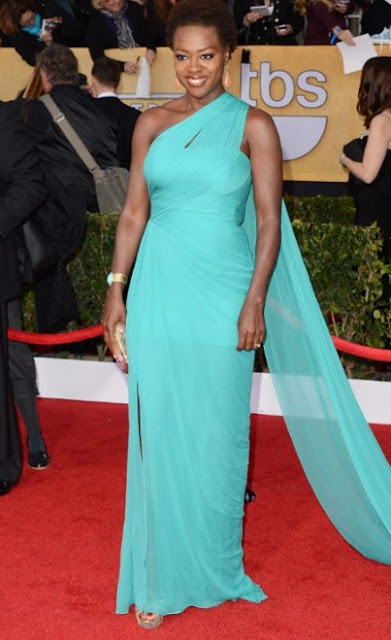 Viola Davis
The color is amazing against her skin, the cut of this dress is so flattering, the draping over the shoulder is dramatic and fun.  The contrast of her coral jewelry, her make up and her hair are perfect!  This is a perfect look.  Congrats, Viola!


And that's all, Possums! I'll miss you until next time but just think, the Oscars are so close now!  Can you even wait?  I don't think I can!

Until then, stay away from horizontal stripes and layer through the winter.