Okay, I'm going to start right off by saying how disappointed I was that NO ONE from Downton Abbey was at the Baftas.  It's just not right!  If I'm wrong, I'll freely admit it but I can find no physical, photographic evidence that they were there.  Which makes no sense because they attended in previous years.

So I'm starting off a bit cranky.  Let's see what happens. 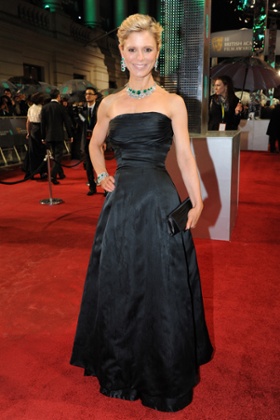 Emilia Fox
What's a British event without the Crown Jewels, right?  I would haul off and say this is seriously boring (black, meh; strapless double meh) except for the GUNS she's rocking and the kick ass jewelry.  Who is your trainer, lady?  Give him my number, would you please? 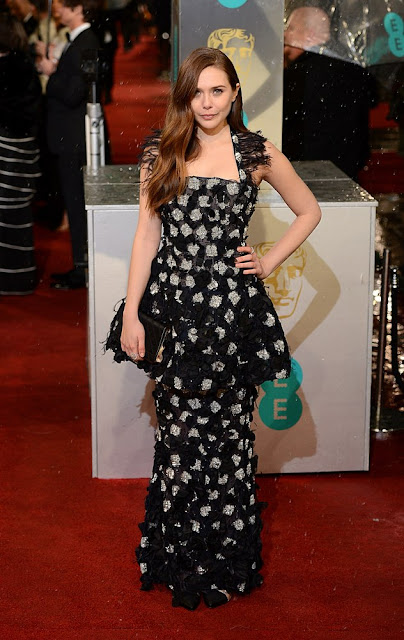 Elizabeth Olsen
While I could probably live with the hideous fabric, I'm afraid I will NEVER sign off on extra layers around the hips.  It's just not right. 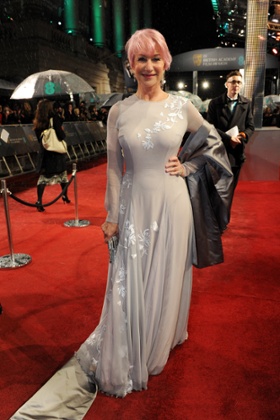 Helen Mirren
She's rocking pink hair, you guys.  And I think she's maybe doing a better job than Kelly Osbourne and her lavender hair (which, omg, I am so over.  How long is she going to keep touching it up?).  The thing I'm not sure about is the dress.  I mean, it fits her and everything and I saw pictures where she was spinning and the skirt was super frothy and fun, but just lying there on the ground with nothing to recommend it but some appliqued flowers?  It's not winning me over, is the point I'm trying to make.  My high hopes for her Oscar dress have officially been dashed. [Sidebar: is that the shadow of her bellybutton that I can see through the dress?]

Jennifer Lawrence
I love me some J-Law, and I don't have any theoretical or philosophical problems with this dress, I just worry that if she doesn't hike it up soon she's gonna be flashing the entire British television-watching public. (Seriously, us Yanks were mostly watching the Grammy's.)

Sarah Jessica Parker
I have to give props to her bod, I mean, she's in her forties, she's doing the mom thing and yet she looks about as tiny as she did when she first hit Hollywood, chin-mole and all.  I DO think there's room for improvement, though.  I know it was raining but pants?  Really?  Why even bother showing up if you're not going to make an effort? 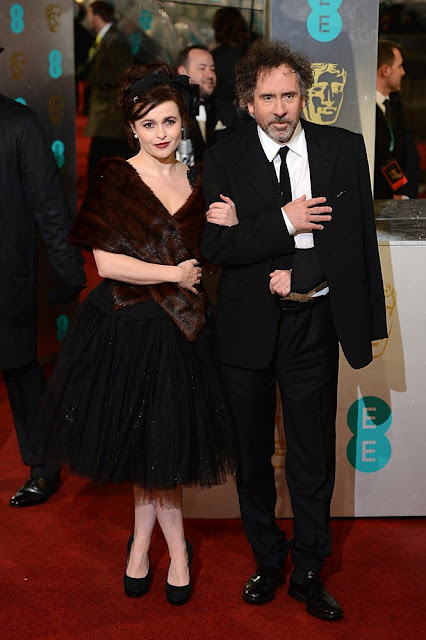 Helena Bonham-Carter
Good grief.  I've grown so used to HBC showing up in mismatched shoes and striped tights that I had to look a second time.  She looks like such a grown up, doesn't she?  And the whole look is so retro, so very Donna Reed, that she looks like even MORE of a grown up.  Full marks (except for the fur; I do hope it's fake). 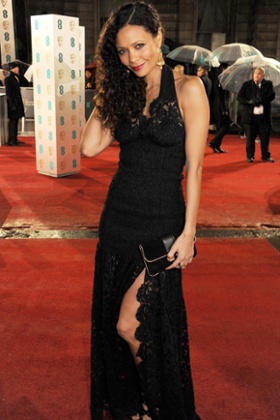 Thandie Newton
Bringing sexy back!  Really nice showing, even though she's wearing black.  I like the halter neckline and I like the lacy slit up her leg.  Great job! 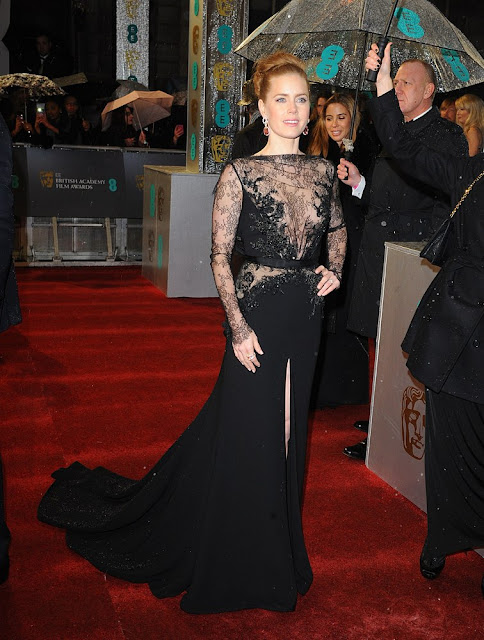 Amy Adams
I almost typed "Addams" as her last name because all I could think about was Morticia Addams.  I like her regal bearing but she's not really bringing it except in the ice dancer costume department. 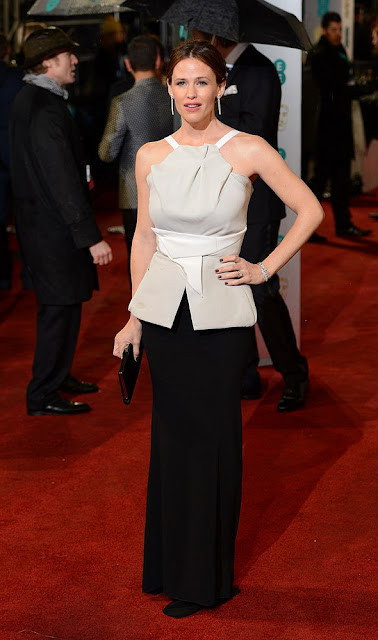 Jennifer Garner
Pardon me while I weep into my tea for a moment.  Why would anyone do this to someone else's body?  Where do I start?  From the neck up she looks great.  From the thighs down she looks boring.  The weird belt just gives her bulk and the excess fabric around her hips makes her look hefty.  I know she just had a baby and I get that she may have been trying to hide a few pounds that just won't goaway, but there HAS to be a better way than this.  For the love of Fashion! 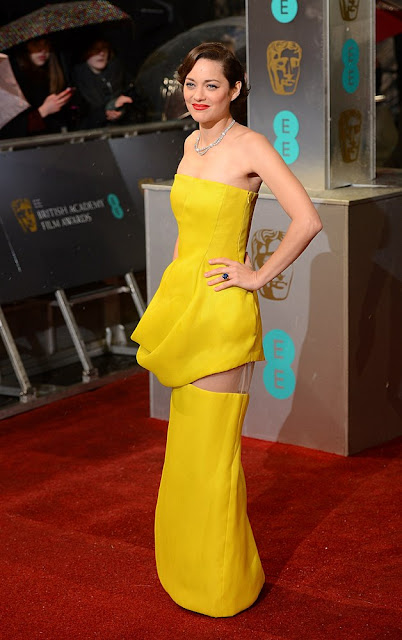 Marion Cotillard
First, the color is amazing on her. What I don't quite get is the horizontal cut away of fabric just above the backs of her knees.  It reminds me of Jennifer Lawrence's dress from (I think) the Globes when she picked it up to walk and it looked like it had separated.  I don't understand the purpose of the cutaway because I don't think it adds anything but confusion to the dress.  It's like the opposite of the extra ruffle of fabric in the front of the dress.  It's like a bi-polar dress. 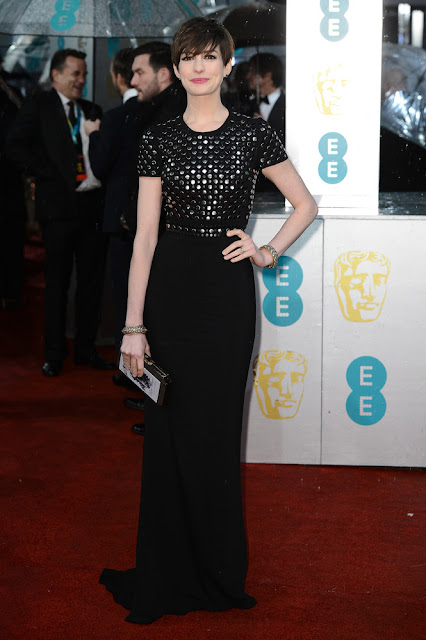 Anne Hathaway
First, get your hair out of your eyes.  Growing out hair like that is tough, we've all been there, but you can do better than this, right?  You're not Justin Beiber, after all.  Second, I would comment on this dress but I'm about to fall asleep.  The metallic polka dots are kicky and fun but they're immediately negated by the t-shirt-iness of the short sleeves. Combined with sleeves is a skirt that leaves SO much to be desired, but again, every time I look closely enough at it to come up with what's wrong I fall asleep. 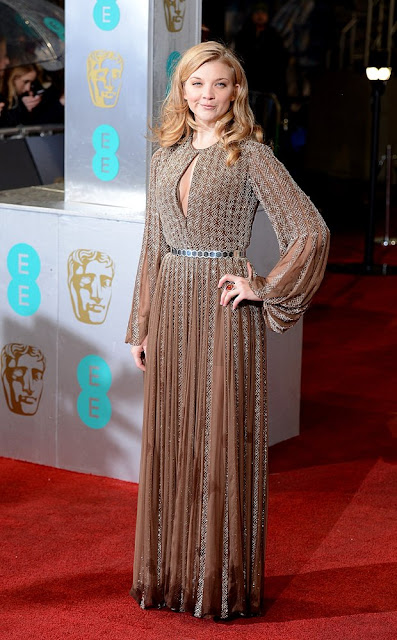 Natalie Dormer
I almost didn't recognize her with blonde hair.  Our erstwhile Anne Boelyn is back and in a dress that should be great but is actually pretty terrible.  The color is okay, it fits her fine, the keyhole in the bodice is sexy.  Unfortunately, the sleeves are way too big.  If this had been a sleeveless dress it might have saved the look but as-is she looks rather drab and brown.

AND THE AWARDS GO TO: 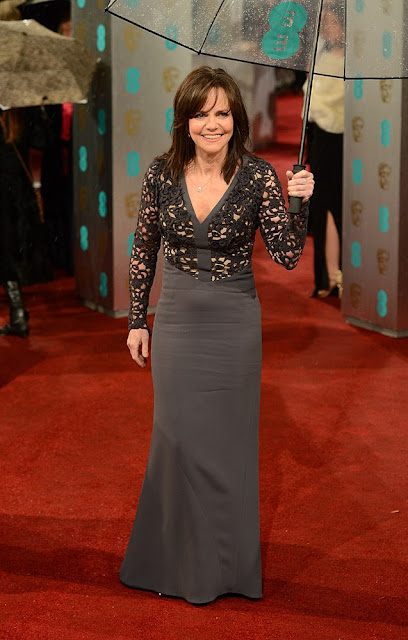 Sally Field
What is it about this picture that makes Sally look like a Hobbit?  Is it her bad posture?  The drab, mud colored skirt?  The wrinkles in the fabric?  The old-timey, lace bodice and sleeves?  The messy hair?  The fact that she's holding her own umbrella?  I just can't put my finger on it...but it's all pretty terrible. 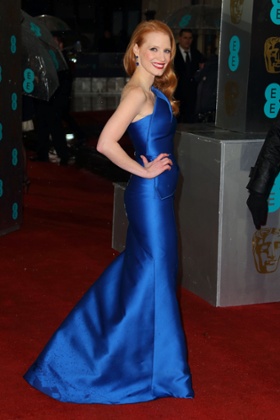 So, it looks like my mood didn't affect my ability to lay the snark down.  Unfortunately, though, that's all there is for this round.  You can pick up your parting gifts around a quarter past never.  They'll be waiting.