A Sampling of Great Britain

Okay, so we're back and it was amazing.  Like, AMAZING.  I took 800 pictures is was so amazing.

I thought about posting all 800 and decided maybe not (you're welcome) but one day I might post them in batches.  For now, here's a sampling.

Most of you know that our mom was supposed to go with us on this amazing trip but our house burned down two weeks prior so it just couldn't happen.  Instead, we bought a little bear dressed as a guard, and we named him Nigel, and we treated him like he was mom.  And he photobombed the hell out of Great Britain.

Did you know that Great Britain refers to England, Scotland and Wales, but that the United Kingdom includes those countries plus Northern Ireland?

Here's Big Ben and a glimpse of the London Eye

The tour of London finished in Knightsbridge so we hopped off and headed to Harrod's for tea!

Very near our hotel was St. Katherine's Gate which was a little neighborhood of shops and restaurants sort of under the Tower Bridge.  We found a medieval theme restaurant down there.  Unfortunately there was a line to get in so we ended up at a place called The Living Room where we were very confused about a dish that included Steak and Old Spotted Hen.  Luckily, our waitress explained that Old Spotted Hen is a kind of beer.


Nigel is in Cambridge!


The really funny thing about Europe (imho) is the juxtaposition between the very new, hip places to go and shop and the ancient, almost crumbling facades of most of those places.  We found a TJ Maxx, a Whistles, a Top Shop, a Marks & Spencer, and everything else you can think of everywhere we went.  And they were all inside of buildings that were hundreds and hundreds of years old.  Talk about building something to last.

I cannot remember the name of this place but it was something like The Patient Peacock and it was just adorable.
I could not resist.  The price was too good.  And it's such a British thing to do.  I had to get a plate.  I stayed my hand at tea towels, however.
Hadrian was a Roman emperor who built a wall straight across Britain at the (then) Scottish border to keep out Scottish marauders.  Here's what's left of that ancient wall.
This little church at Hadrian's Wall was so tiny.
Check out the kneelers.  Hand-stitched, no doubt but still not much between you and that hard wood floor.

The queen's official residence in Scotland.  Did you know that the Scots refer to our Elizabeth as Elizabeth I?  They do this because when Elizabeth I reigned, Scotland had it's only ruling house, the Stewarts.  It was not until Elizabeth I died that the Stewarts inherited her throne.
How did the Stewarts inherit the throne of England?  Well, see that building way up on that hill?  Part of it was built to commemorate Henry VIII's sister Margaret's marriage to King James IV of Scotland.  When Elizabeth died without an heir, it was James and Margaret's descendant who was next in line.


It was like a little bit of Minnesota and dad found us in Scotland!  Nigel tried to make off with it but we prevented grand theft atv.
We had cream tea in Edinburgh after seeing the castle at the Balmoral Hotel.  Is there anything in life better than a good plain scone and clotted cream with some lovely hot tea?

Does anyone remember Pride & Prejudice?  Remember when Lydia and Whickam run away together?  This is where they were thought to have gone.  Gretna Green has a very long history of marrying runaways who's parents did not approve because the legal age to marry in Scotland was 12 (I know!) and GG was right over the border.
Even the last house in Scotland will marry you!

Home of the best gingerbread recipe on earth. 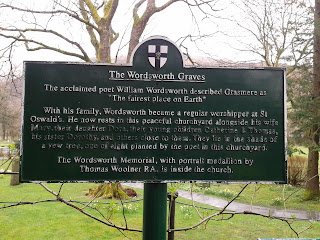 A dry stone wall is a wall constructed without the aid of concrete.  They are all over the Lake District in northern England and they're getting to be a lost art.  There's a science to placing each stone and rock in a way that the wall is sturdy and stable.  Just for fun I tried to pry one of those rocks out and nothing would budge.  Very solid.
There are roughly three million people in Wales.  And 15 million delicious sheep.
Our greeter at Ruthin Castle in Wales. 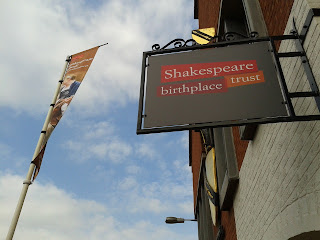 Stratford-upon-Avon was our next stop!


Bath is like a tiny piece of ancient Rome, dropped right in the middle of modern-day Britain. 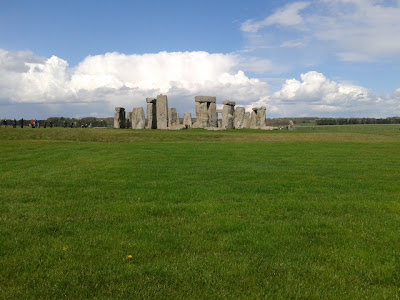 On the morning we left, Colleen and I found an open air market with fresh scones.  It was a four pack and we each ate one.  I put the other two in my carry on not thinking we'd get a chance to eat them before we left.  I was right, but at the airport we found a place (The V Bar, I think) that sold us a cup full of mascarpone cheese.  It wasn't quite clotted cream but I couldn't complain too loudly.

Now, I just need to find out where I can buy Pimm's and clotted cream in the U.S.  Any help would be very much welcome.