This is a first for me, possums.  I've dabbled in the Grammys and even recently played with the CMAs but I've mostly steered clear of the AMAs.

Well, it's Thanksgiving and Blogger is finally acting normal-ish again and to celebrate I thought I'd Slam some celebs for you.  Something for you to give thanks for when you're sitting around the table and it's almost your turn and you can't think of anything to say except that weird uncle Jerry hasn't tried to give you that overlong hug yet.  You're welcome! 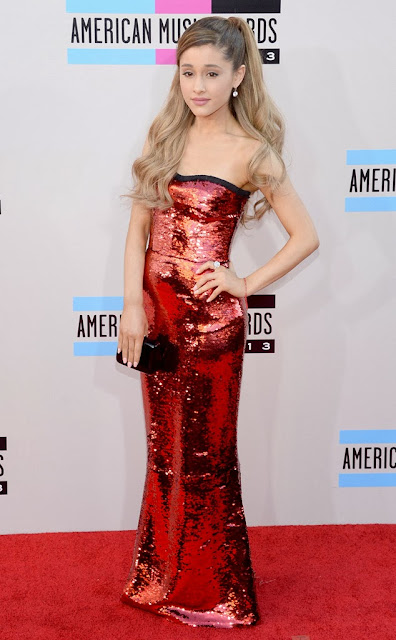 Ariana Grande
Is it weird that when I look at her I wonder how Charo from The Love Boat is doing? 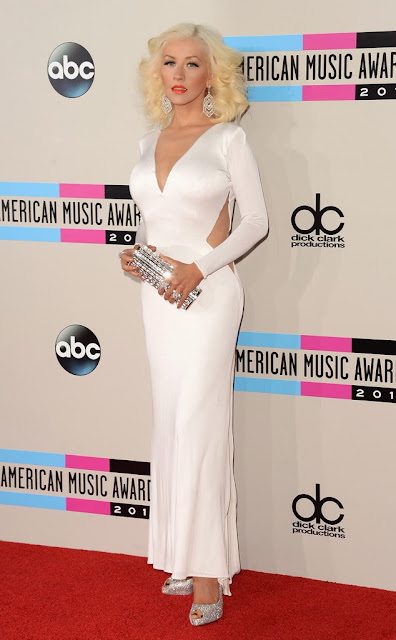 Christina Aguilara
Surprisingly tasteful.  Everything fits, everything that should be tucked in, is, and she's looking pretty good. 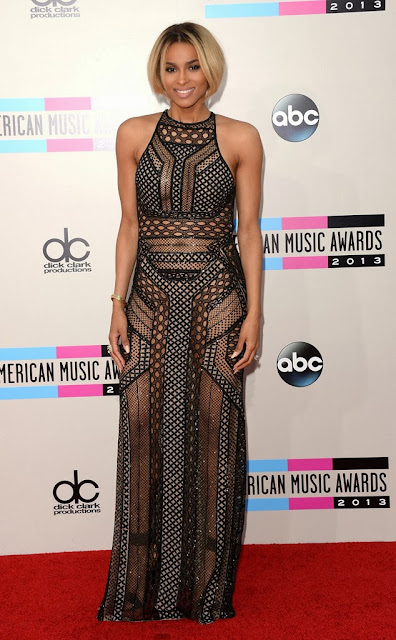 Ciara
One word: HIDEOUS. If Frank Lloyd Wrong ever designed a dress it might be this one. 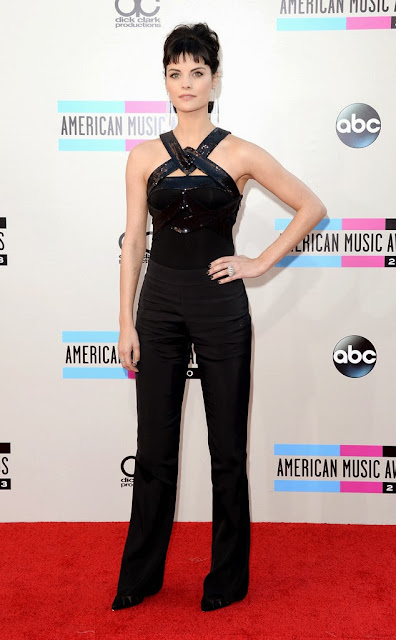 Jaimie Alexander
I don't know who she is but I'm kind of digging this. She's got some fantastic arms and shoulders to show off and she chose an outfit that's doing it's job well. I think it could have easily been a dress with the same bodice, and I can't tell for sure but it looks like her pants desperately need to be hemmed, and the halter is a little...aggressive, but overall...I can live with it. 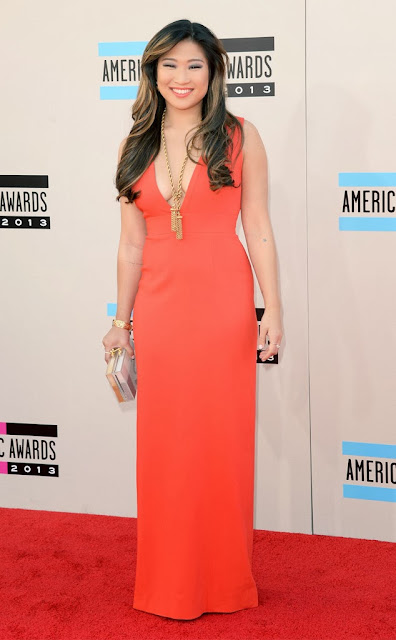 Jenna Ushkowitz
At first I was like, why are The Glee kids at the AMAs?  And then I remembered that there's singing on that show, which tells you just  how long it's been since I've watched it.  And yes, that makes me sad.  Love the color on her, mostly love her hair (highlights yes, two big sausage roll curls, no), digging the jewelry and really like the cut of the dress.  It's little too much sideboob for me but hey, she's playing to a different audience. 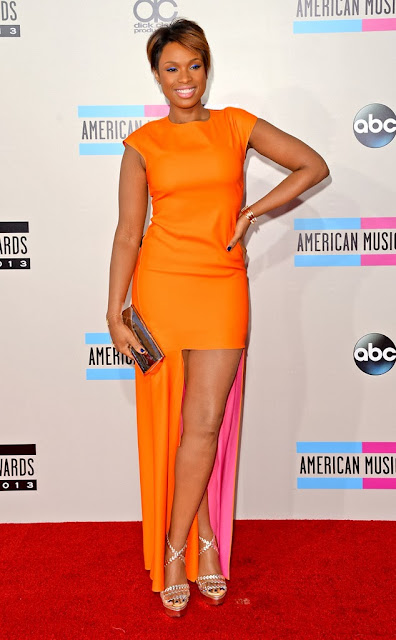 Jennifer Hudson
Oh, Jennifer.  Why do you let your stylist talk you into things?  Did you learn nothing from the Bolero Jacket Incident?  Love the color (and even the contrasting color), love the sleeves, HATE the panel cutout.  Did your legs need a breeze?  Because it looks stupid. 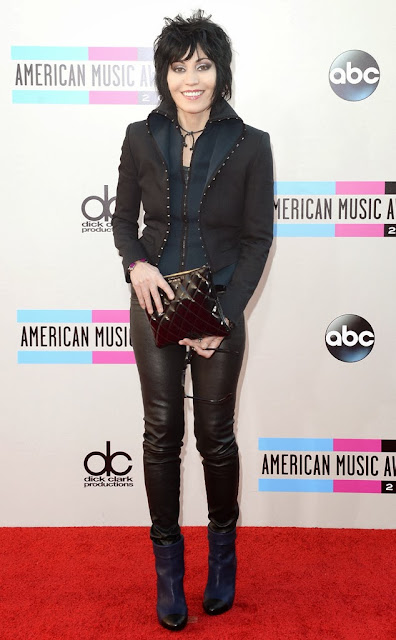 Joan Jett
F'awesome.  She's Joan Jett, if she wants to wear leather pants and boots to an awards show, I think we should all just shut up and say thank you for coming.  Her hair on the other hand...tell me it's just the angle of the camera and she's not sporting a semi-mullet. 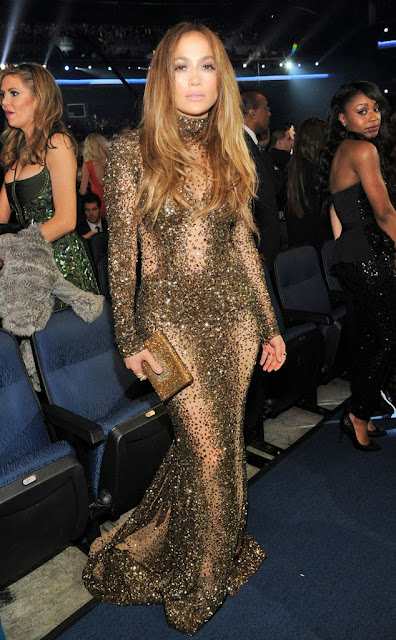 Jennifer Lopez
I think she's trying to out-Beyonce Beyonce.  Either that or she stole an ice dancer's costume and tacked on a skirt.  Still.  It's possibly the most conservative thing she's ever worn.  And not in a good way. 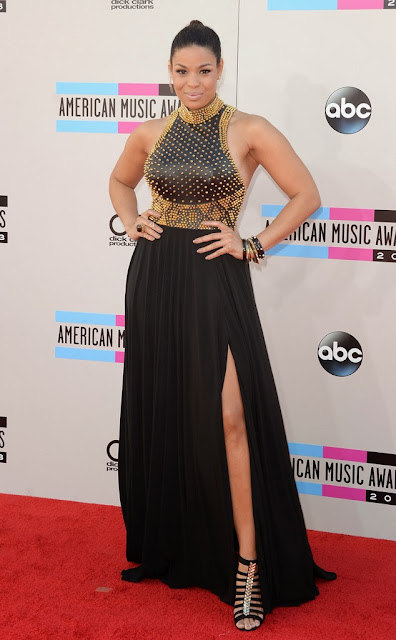 Jordin Sparks
From the waist down she looks great.  Love the shoes.  From the waist up I'm trying to figure out what's going on.  Is the bodice covered with polka dots or studs?  Can she hug someone wearing studs?  Does she not want to hug anyone tonight?  Where is her lipstick?  Did she have a snack in the limo and accidentally eat it off?  So many questions... 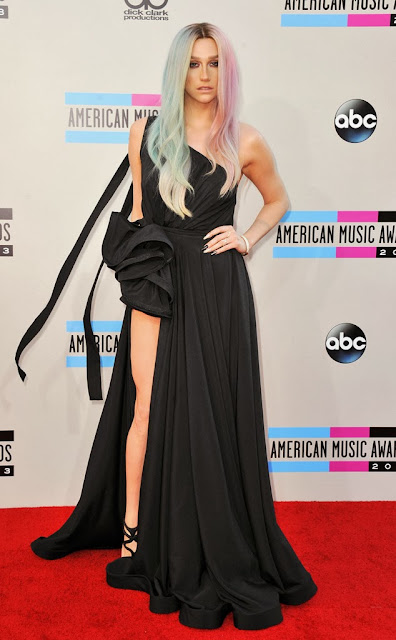 Kesha
Every time I see her name I think of that high fiber breakfast cereal that's made out of actual tree bark.  Anyone else?  As for her dress I hesitate to use the words batshit crazy, but there's a LOT going on here.  The side-slit is one thing.  The huge ruffle at her hip is another.  The ribbons blowing in the breeze seems like overkill to me.  The cotton candy hair makes me want to just ignore her altogether. 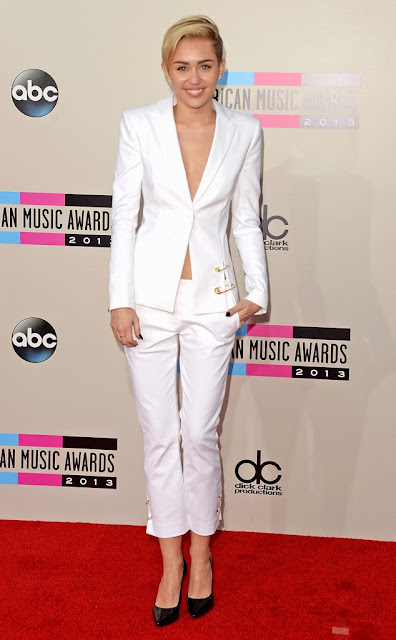 Miley Cyrus
Wow.  For the first time ever I'm forced to say, Miley looks pretty good.  I really like the suit.  It's kicky and it fits her, and yes she's baring a little middle but it's tame compared to some others in this list.  She looks really cute and well put-together. 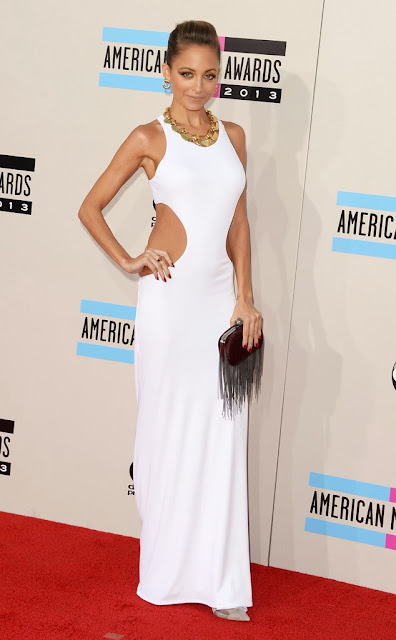 Nicole Ritchie
I don't get why she's on the list for this event but whatever.  She looks really awesome, though, I wish her lipstick were a color.  I'm starting to get officially worried about her weight, though.  After she had her kids she finally looked healthy and normal.  This seems to be the beginnings of those dark times again. 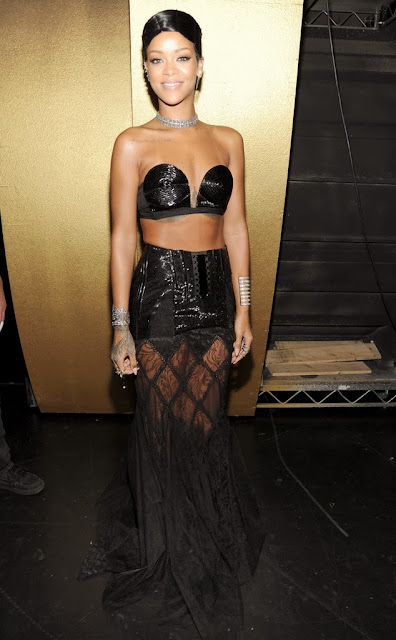 Rhianna
Ridiculous.  She looks like she stole the seashells off a friendly mermaid and then tried to construct a tail out of leather and mesh.  Mermaid Costume Fail, RiRi! 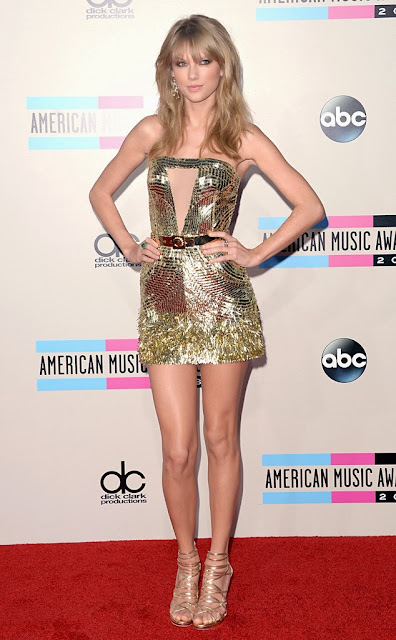 Taylor Swift
More ridiculous.  Where's the ice dancer you stole this from and why didn't you choose to mug someone who wears the same size as you? 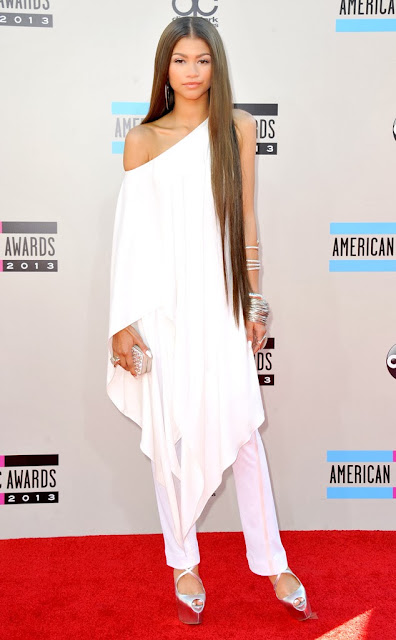 My notes refer to this person as Zendaya.  No idea if that's a first or last name.  This is mostly okay.  Her hair is crazy long, the top is a little too baggy for me (for heaven's sake if you starve yourself into a size 0 you might as well show it off) but her shoes are just nutty.  Are those four inch platforms?  Good God. 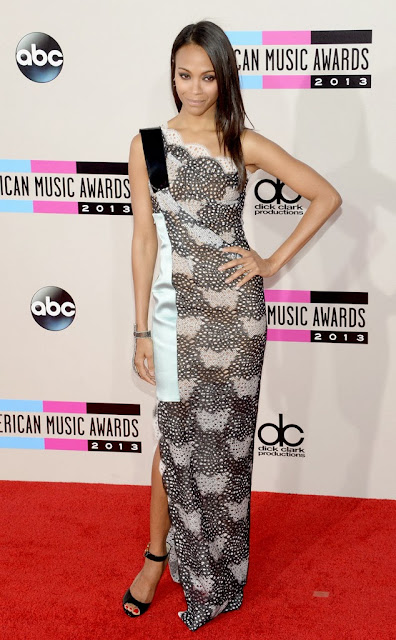 Zoe Saldana
Okay, I like that it fits but what is going on with the pattern? It's almost as if the designer didn't realize how close to the edge of the material he was cutting and accidentally got some of the selvage.Weird, right? 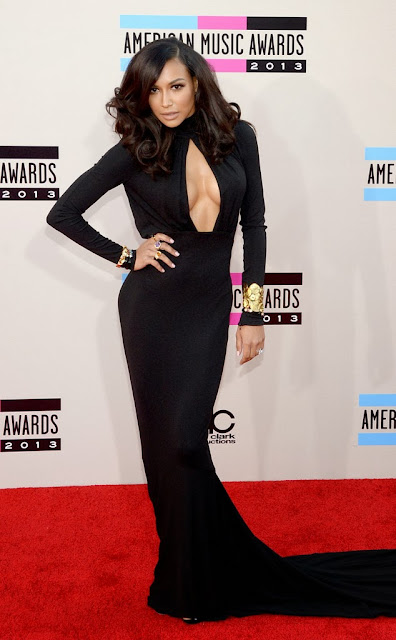 Naya Rivera
Holy Mother of GAWD.  She looks like an even vampier (is that a word?) Morticia Addams.  And the look on her face hints to me that she's taking herself awfully seriously these days.  Dear Naya, Calm down.  Love, Everyone. 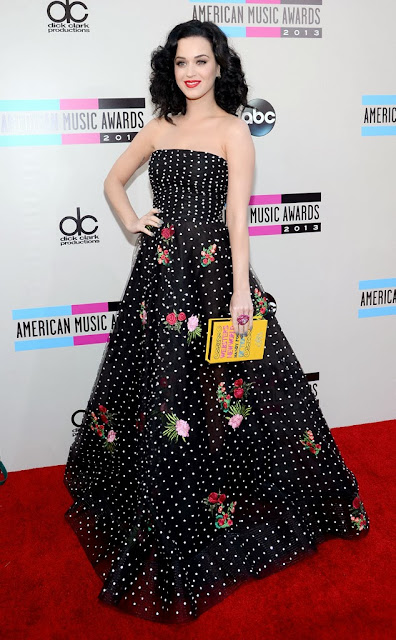 Katy Perry
This is really pretty.  I almost said adorable but she's a grown woman and that wouldn't be right.  Still.  She's using a re-purposed DICTIONARY for a clutch.  I think you all maybe know how I feel about books and I have to be honest: huge points.  The dress is whimsical and fun, her hair isn't green or blue or weird and I'm totally digging this look.

And that's all there is, love-bugs!  Until next time!