I honestly can’t remember if I’ve ever done a CMA Slam before but I’m so annoyed with blogger right now that I’ve been avoiding it which means this space goes forever without new posts, which also annoys me.  So, I’m writing this in word and will once again copy/paste it over to blogger.

I don’t think I’ve watched a CMA since college when I was VERY into country music.  I’m guess I’m getting back into it, but my main focus is still pretty much on movies and TV.  So forgive me if I don’t know who some of these people are. 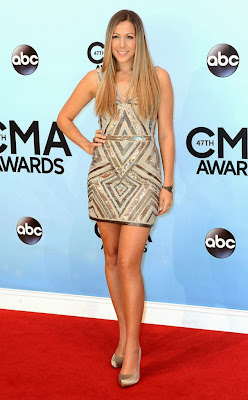 
I’m not usually a fan of Frank Lloyd Wrong but I have to say that I think this dress is seriously adorable.  It fits her, it falls at a good length, it might not be super formal in that regard but please, this is the CMAs not the Oscars.  I wish her hair weren’t obscuring so much of the top but hell, she looks pretty awesome. 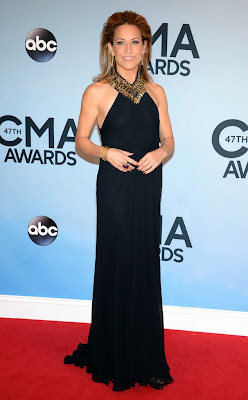 Sheryl Crow
I’ve never had much trust in Sheryl’s ability to wear clothes well.  Does anyone remember the Christmas ornament cut out dress?  Ugh.  This isn’t terrible, though.  Sure, it’s a column and rather on the shapeless side, and yes, the collar looks like it might weigh about a hundred pounds, and yeah, her hair is really severe for something that’s been left long…but on the whole this is a marked improvement over some other outings. 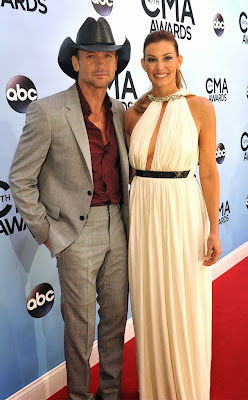 
Obviously, I don’t care what Tim is wearing (though I do think it’s funny that he still can’t take that hat off and show the world that it’s okay to be bald).  Faith on the other hand, I’ve loved since college and while I really want to like this I’m having a really hard time.  From the neck up she looks awesome.  The dress in and of itself isn’t bad but the very long, open cut revealing side boob is a bit much, especially when the boob is hanging so low.  Is that ageism?  Kidism?  Look, I get it, as women get older and have kids, the girls hang a bit lower, it happens.  I get it and respect it, I just don’t need to see it.  Also, I wish the black belt had been replaced with rhinestones to match the choker.  I think it would have added symmetry and been a nice touch. 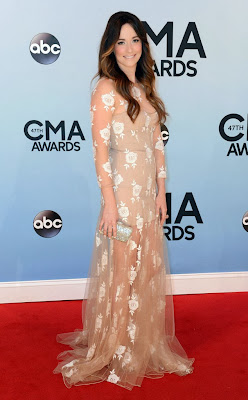 Kacey Musgraves
I have no idea who this is, but I want someone to sit her down and explain that it’s not okay to wear your childhood bedroom curtains to award shows (even the CMAs). 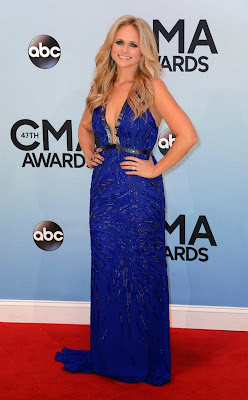 Miranda Lambert
Love the color, love her hair (though I stand by my assertion that side-bangs would help minimize that ginormous forehead of hers), love the cleavage (not too much, not too little).  I think she’s killing it. 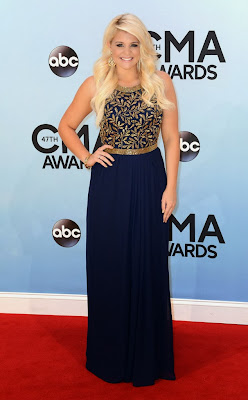 Lauren Alaina
I don’t know who this is either but I have to say I don’t hate this.  I’m no fan of two tone dresses but the pattern on the bodice is so elegant and delicate.  I almost wish it had been done over the whole dress. 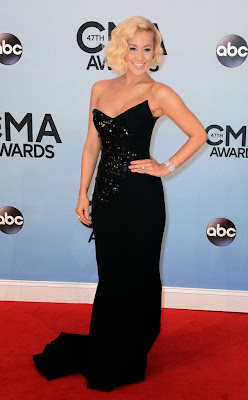 Kellie Pickler
When did Kellie turn into Mae West?  Leave some peroxide for the rest of us, why don’t you?  Seriously, though, I kid.  I don’t know much about her except she fills out a dress pretty well.  The bodice looks really stiff, though, doesn’t it?  Like the kind that stays in one place no matter how your body moves. 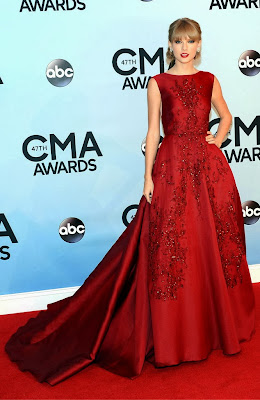 Taylor Swift
I’m trying not to let my personal feelings about Taylor influence my thoughts on her outfit.  Look, I’m sure she’s lovely (if you’re not dating her or recently broke up with her).  The dress is okay.  I like the cut and the train, I just wish the sequins had been more evenly scattered or not added at all.  The weird flowering beads on her chest if kind of distracting and the two sets of beads flowing down either leg are also distracting.  Not loving this. 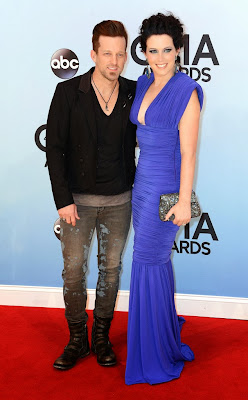 
This is definitely the name of the band and not the name of the woman in blue.  I have no idea what her name is (other than Mrs. Thompson) but I do have some serious opinions on her dress. 1.) The shoulders look like they were pulled from a space suit they’re so huge.  2.) I like the ruched waist, I just wish it had stopped at her hips and not continued down to her knees.  3.) The chiffon falling from the end of the line at her knees is nice but the line itself is distracting.  Horizontal lines are dicey to begin with, why would you put one right across your legs?  4.) I really love the color. 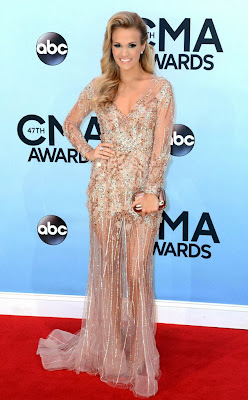 Carrie Underwood
The U.S. Olympic team just called.  They want their ice dancing costume back and they’re going to charge you for the time it takes their seamstresses to remove the stupid bottom you tacked onto it.  Does her hair look a little reminiscent of There’s Something About Mary?  That’s the right movie, right?  With Candace Cameron and the hair gel?  Just saying, it’s awfully stiff. 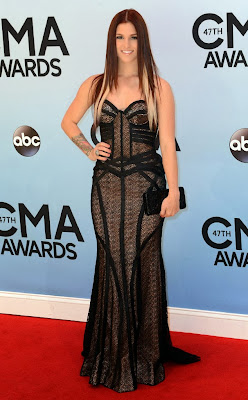 Cassadee Pope
Let’s be honest, here, this dress is terrible.  It looks like someone turned it inside out and then glued black binding to all the seams.  It’s the skeleton of a dress except worse.  I like her hair, I guess but dude, lippy was meant to be an actual color.  Can we please with the nude lips already? 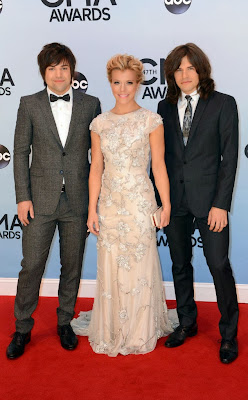 Perry
My notes say this is Perry but my memory is telling me that that’s not her name but maybe the band’s name?  Whatever.  I should totally look it up because she’s KILLING IT but I’m lazy.  Love her hair.  It’s up and out of her face but it’s free-looking and wavy.  I love her dress (omg, you know how I feel about a pair of capped sleeves), and the dress itself fits her beautifully, is demure without being dowdy, and is delicate without wrinkles.  Full freaking marks!

And that’s all the time (and pictures) we have, lovies!  Until next time (or until Blogger stops being a shit…seriously, if anyone has any advice or any alternatives I’m up for listening)!

You're right about the movie- There's Somthing About Mary, but the actress was Cameron Diaz, not Candace Cameron. ;)
And I pretty much agree with your assessment of everyone listed. I don't mind the sequins on T. Swift's dress. Oh, and yes, the band is Perry. Not sure what the woman's name is. :)

HA! I cannot believe i transposed Candace Cameron and Cameron Diaz! Wow, I am really losing my mind!