Yay!  Another awards show in which women wear sometimes beautiful, sometimes silly and sometimes downright hideous clothing.  Can you even stand the excitement?  Huzzah for the Baftas!! 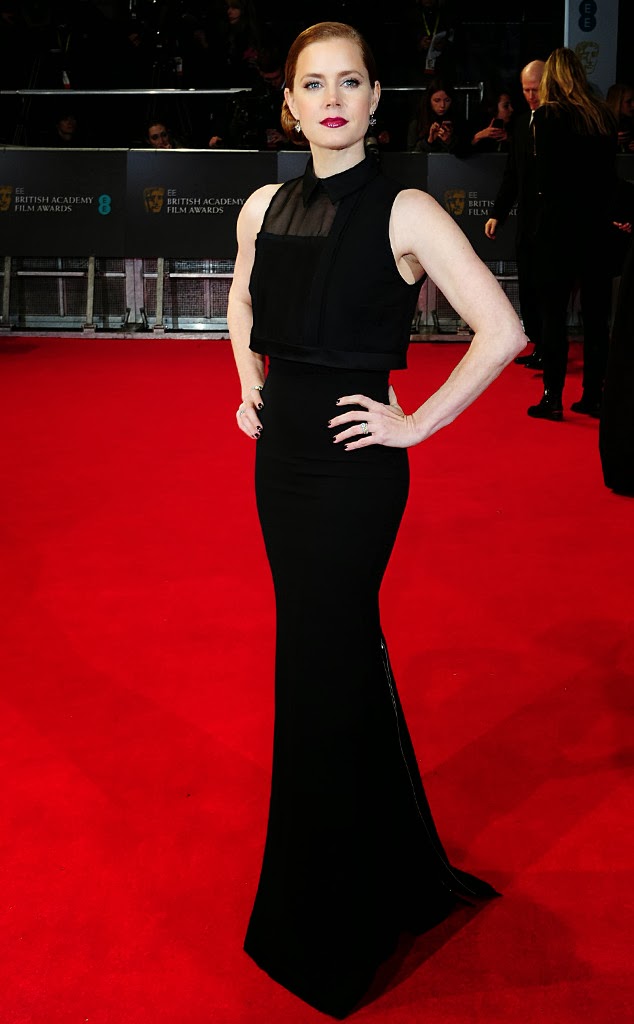 Amy Adams
Could she look more imperious?  Doubtful.  What isn't doubtful is that it looks like she paired a crop-top with a strapless sheath and while she looks completely stunning, I'm not sure I like the way the top of this dress happened.  On the other hand, what's more boring than a black strapless?  Good call, Amy. 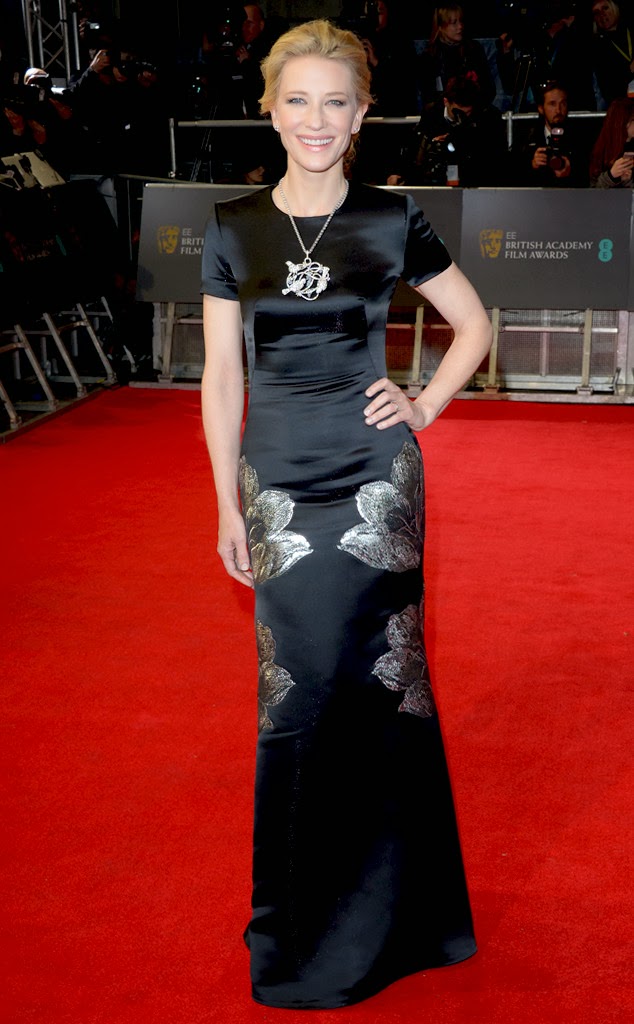 Cate Blanchett
Have you seen Blue Jasmine yet?  It's incredible.  The story is one we all know but the actors have taken their characters and made them into something much greater than the sum of its parts.  This dress, on the other hand is about as underwhelming as they come.  The objects (flowers?) might be hand-painted or whatever but that doesn't change the fact that their placement is awkward.  And for a second I thought her necklace was one more hand-painted awkward flower dead center.  Not really what you want people to be thinking, Cate. 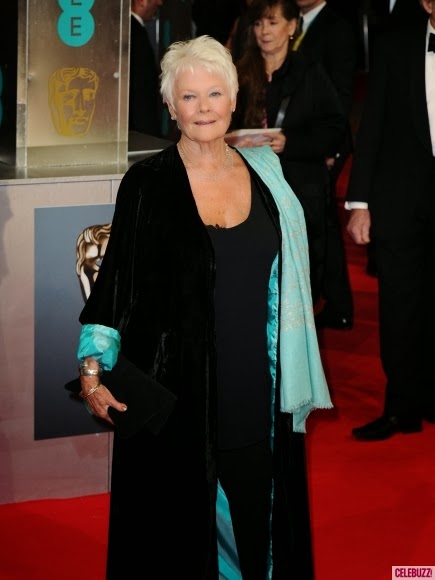 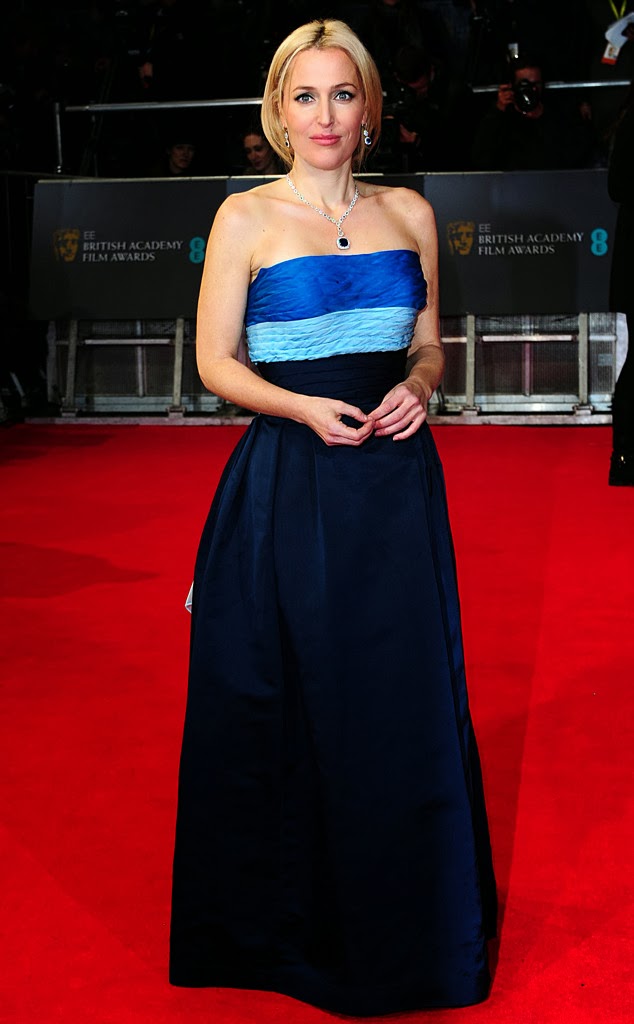 Gillian Anderson
She was unbelievably brilliant in The Fall (f you haven't seen it go now!) which is why I don't understand how she could have chosen this.  My bias against two-tone dresses is well-established, I know, and I am trying really hard to see the good in this but it's difficult.  First, the blues don't really go together.  Second, the horizontal line right across her bust seems awkward and misplaced.  Eh. 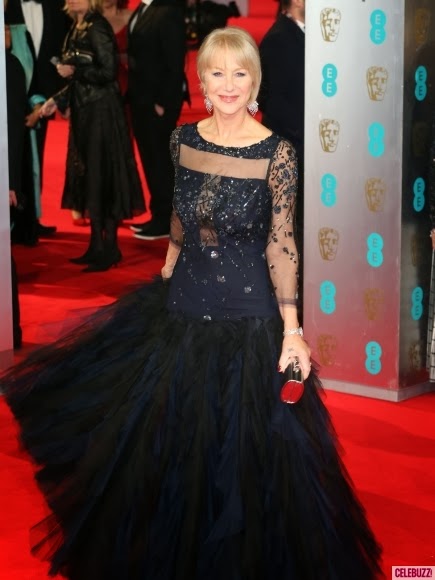 Helen Mirren
Okay, I know.  I have this epic girl crush on Helen and I was all set to rave about her magnificent choice when I had to stop and really stare at what she'd put on.  And after I stared for a while I began to wish that heavy sequined, collar were just more tulle.  It makes the rest of the dress seem so heavy, doesn't it?  The sleeves are delightful (my favorite three-quarter length) and the bodice is delicate and feminine and that heavy yoke of darkness at the top seems just not to match.  Helen, call me.  Let's drink champagne while your driver takes us up and down Rodeo Drive.  Your treat. 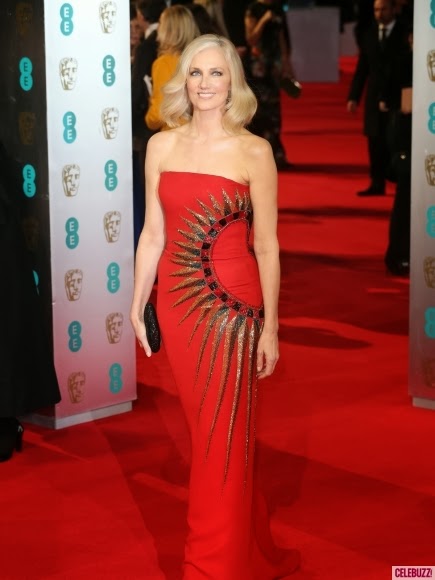 Jolie Richardson
Oy.  Another one that I really want to like but don't.  What the hell is that thing supposed to be?  The sun?  A souped up Chinese star?  I don't understand. 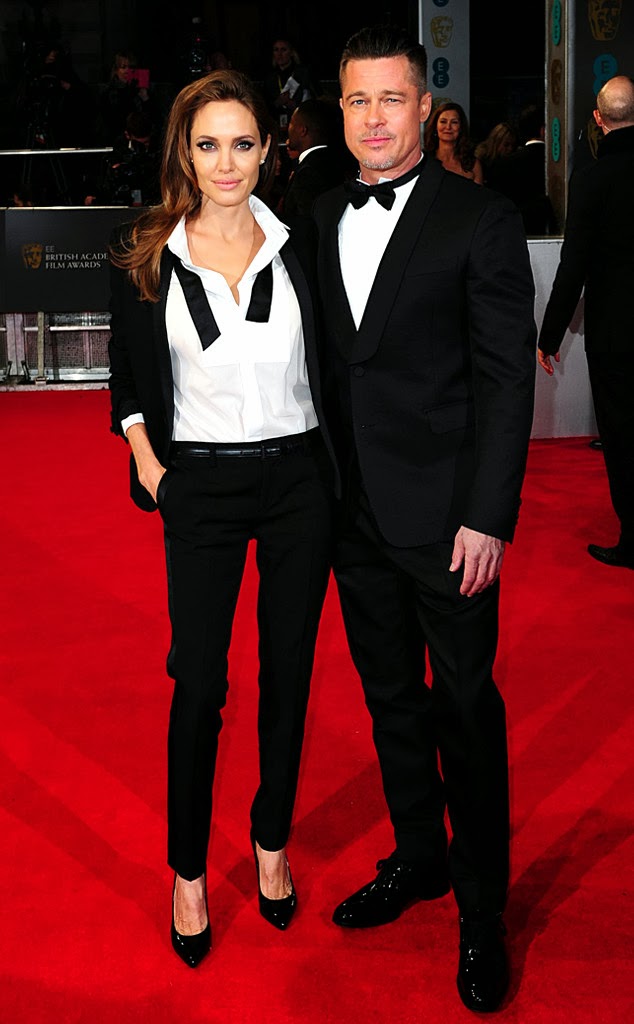 Angelina Jolie
And here's one I was prepared to hate but don't.  I feel like she was sort of like, "Eh.  It's February in London and I am Angelina Jolie.  I'll wear pants if freaking want to."  And you have to give her credit that she looks amazing. 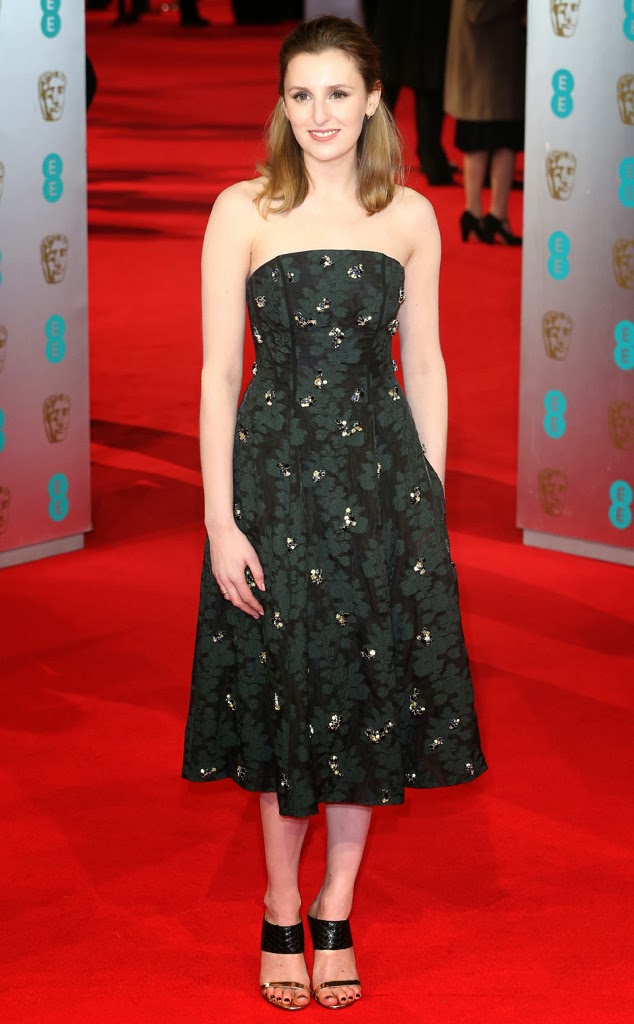 Laura Carmichael
Once again the truism rears it's ugly head: Laura is prettier than Lady Edith.  I'll be honest, I'm not in love with the dress but I am in strong like with it.  The shoes I can sort of take or leave but her hair is sort of disappointing.  Do you think she did nothing with it as a counterpoint to the elaborate hairdos on Downton?  I hope so.  I hope it wasn't laziness. 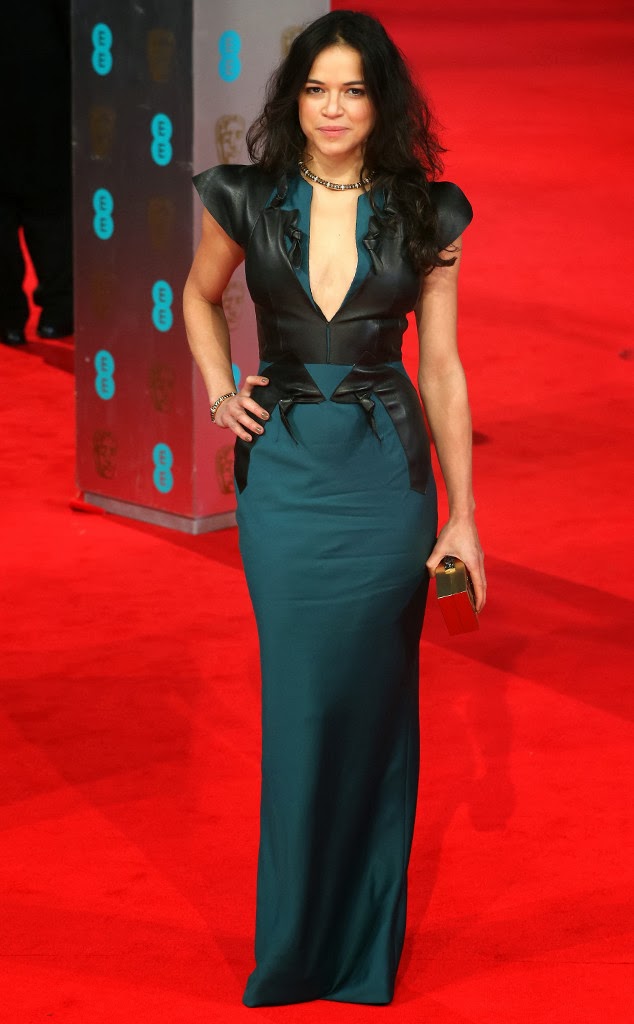 Michelle Rodrigues
My first thought was to wonder how she got an invite to the Baftas.  What's she been in recently?  My second through is that her should pads are incredibly aggressive.  Almost as aggressive as her cleavage.  And, seriously, she couldn't have combed her hair?  Really? 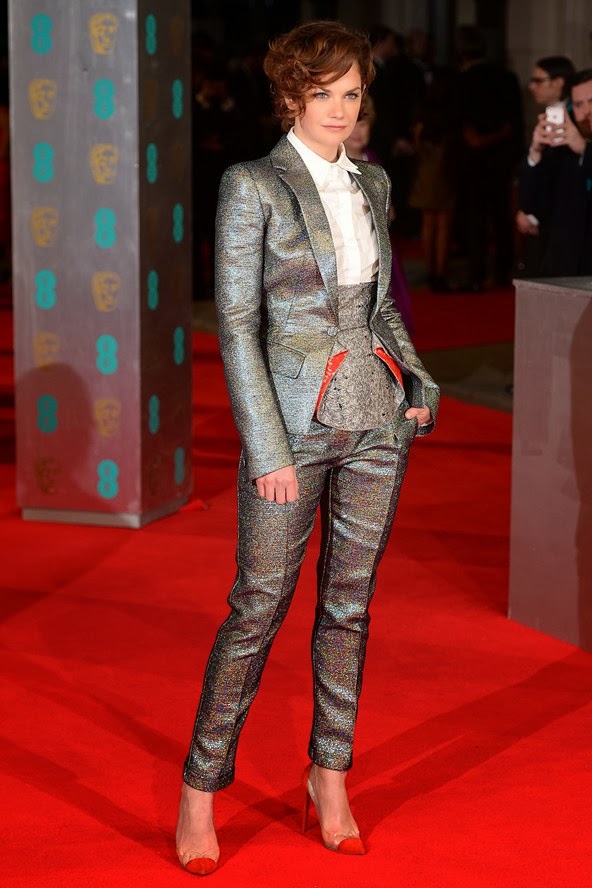 Ruth Wilson
She looks like what would happen if David Bowie had come from space.  Seriously, though, she was fab in Luther and this isn't terrible.  The skinny pants are flattering and the jacket is fun.  I like the accents of color and I like her hair.  Full marks. 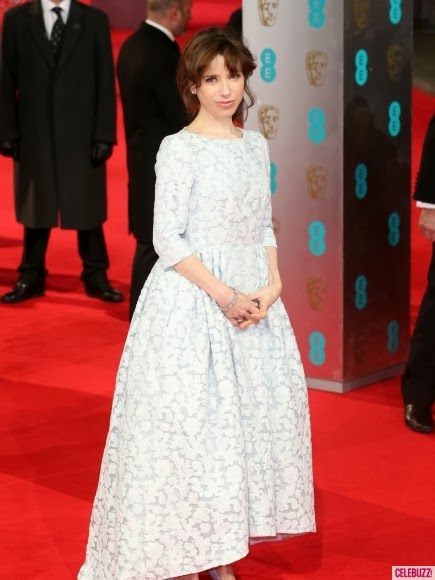 Sally Hawkins
She looks like she's waiting for someone to hand her the bouquet so she can take her father's arm and head down the aisle.  In other words: disappointing. 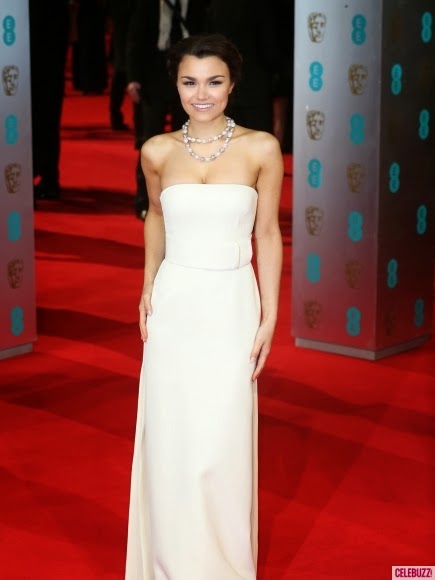 Samantha Barks
Loved her in Les Miserable.  She was the perfect Eponine (though how she was cast and not me I'll never know).  Unfortunately, I want to take her dress by the bodice and hike it up for her before ripping off the ungainly and unflattering belt and dying it a different color.  Royal blue maybe...  On the plus side those are some killer shoulders. 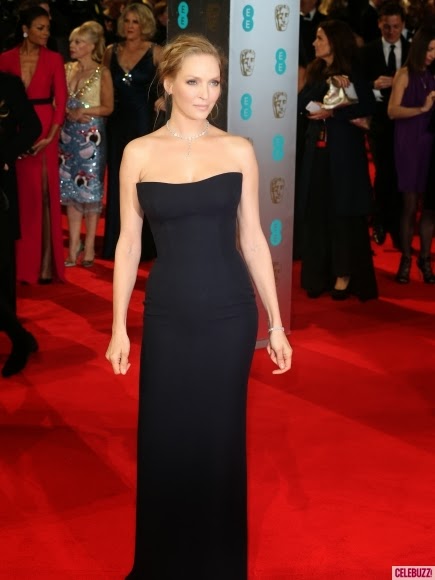 Uma Thurman
Is anyone else sleeping?  This dress has given me narcolepsy.

And now that special moment! 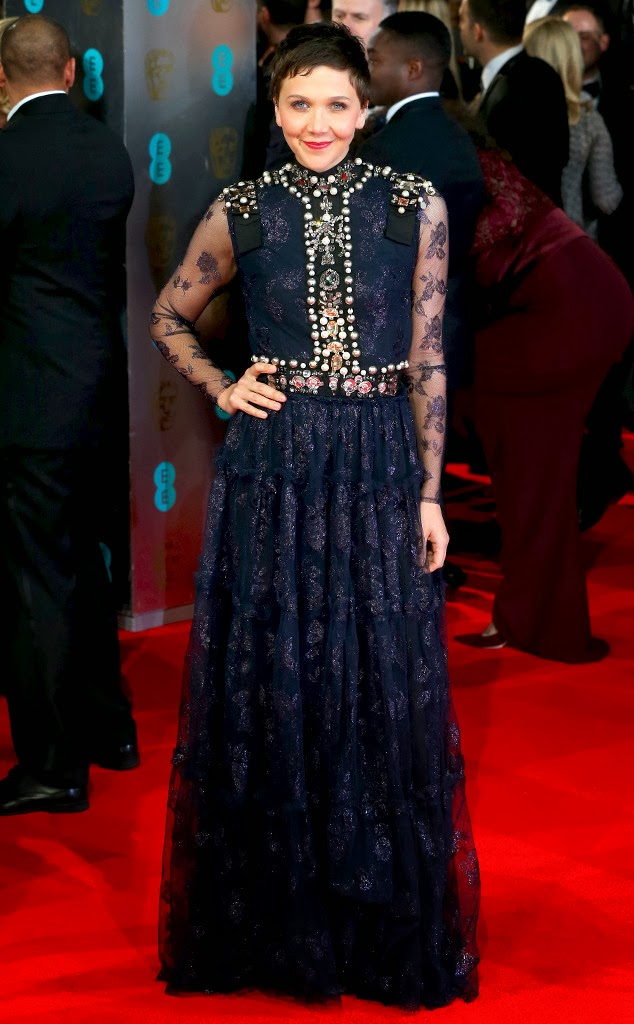 Maggie Gyllenhall
Where, oh where to begin.  The beads are a nightmare, the bodice looks like an ill-conceived vest, the shoulder pads are hideous and the belt is just wrong.  (Deep breath.)  Maybe if the sleeves were three-quarter and all the other crap was removed it could have been salvaged, but I doubt it.  On top of everything she went with navy blue, the second most boring color out there (right after black). 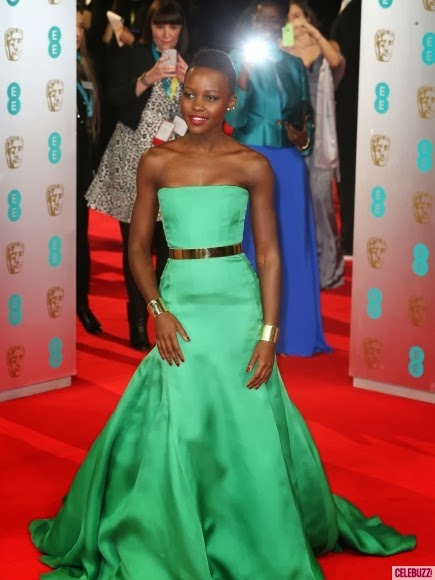 Lupita Nyong'o
This woman just won't quit!  Another fabulous dress in another fabulous color.  This is how a strapless should look, supported and up, not sagging and worrisome.  The belt is a nice touch and though I might blast her for the matching Wonder Woman cuffs I feel like her awards show theme this year has been superheros so I'm just gonna roll with it and enjoy the look of this rich, luxurious fabric.

And that's all kids!  Soon enough we'll be wading through Oscar night so stay tuned!!!
Posted by Kate at 18.2.14