I've never done the Billboard Awards before but we've had a special request so let's have some fun!  Full disclosure: I am not a music person so I might not know who some of these people are. 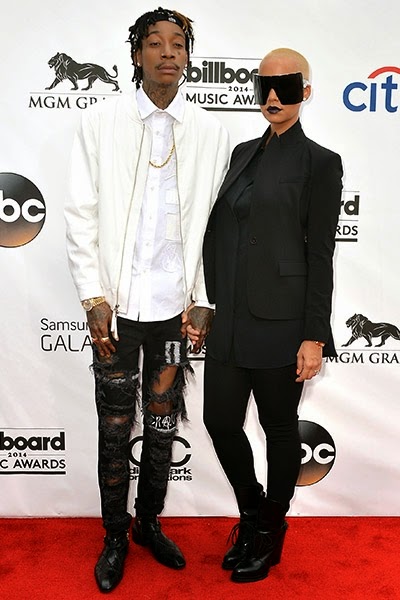 Amber Rose - Okay, I'm just going to go ahead and say it: when women wear men's formal wear to formal events like this?  It's lazy.  Also, you know she's hoping to out-Gaga the Lady herself with those shades. 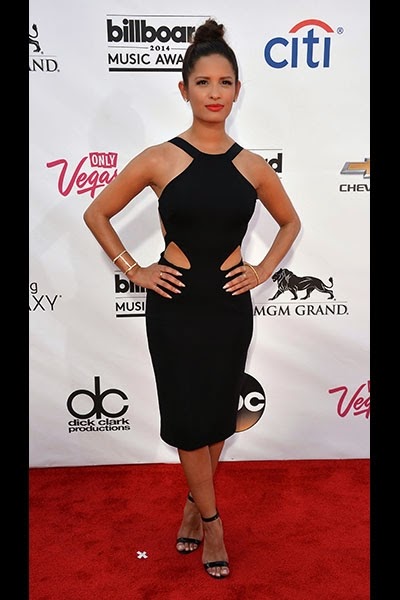 As boring as this is (and even with the cut-outs it's pretty boring) it's still one of the nicest dresses on the red carpet.  I just wish I weren't falling asleep. 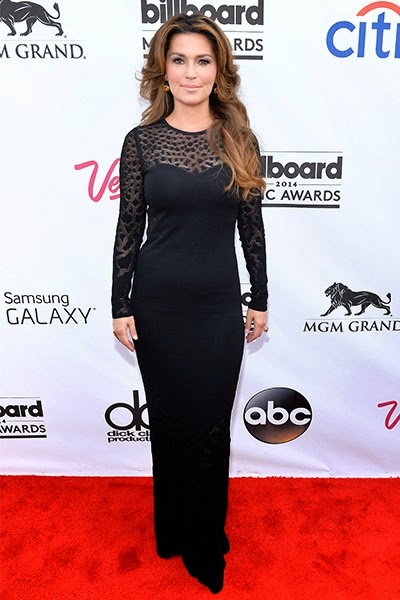 Speaking of falling asleep! At least the lady up top was showing some skin.  This is veering terribly close to Amish country.  Wait, I'm sorry, did she recently convert to Islam?  Because that could explain everything. 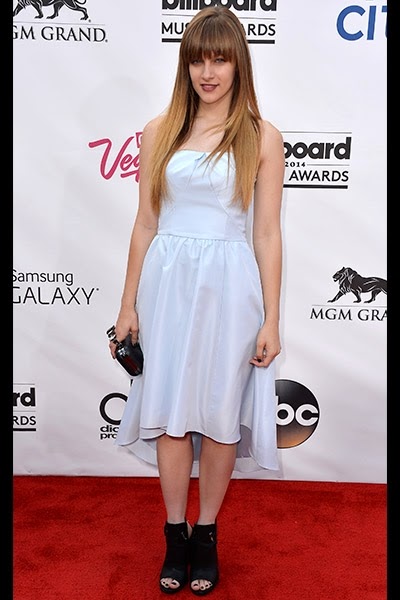 The first thing I thought of when faced with this dress: Prom Night Dumpster Baby.  The second thing? Terrible, TERRIBLE shoes for this dress.  They're so heavy the only thing they match is her bangs, which by the way should be softened IMMEDIATELY. 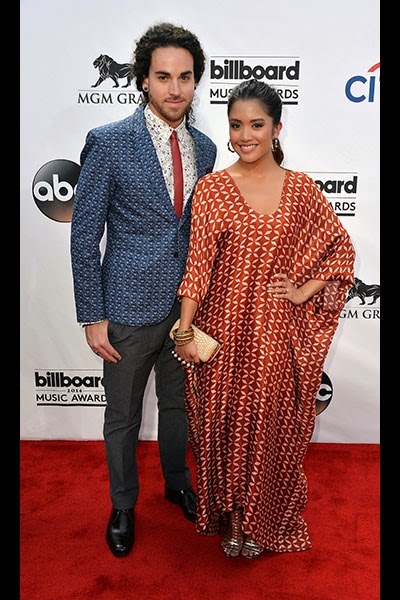 Bea Arthur called.  She wants her favorite caftan back. 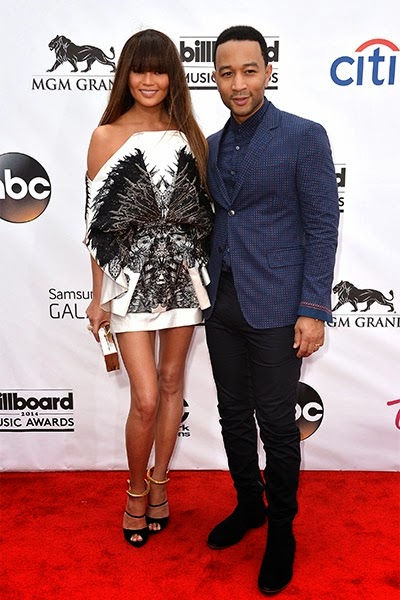 Chrissy Teigen - speaking of heavy bangs, how does this woman see to walk?  The dress is fun in a weird kind of way.  I like symmetry and I like her shoes and I guess I like the crazy cut of the pattern.  This could have been a real winner if she'd only done something nice with her hair. 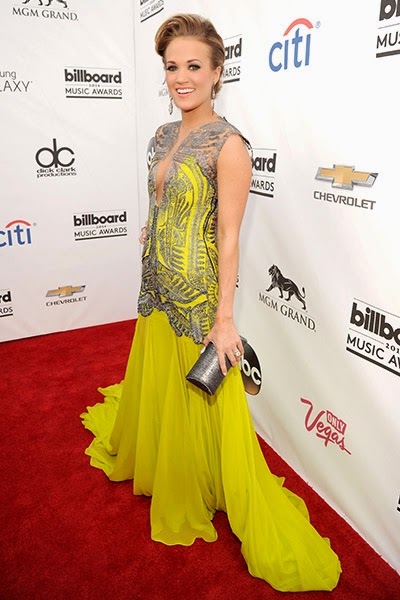 Carrie Underwood - Okay, first, yellow is a really tough color to wear and yet people have been pulling it off all year.  And I think she could have pulled this off as well if it had just been a fun strapless.  The metallic, lacy half-body vest? It sort of ruins the effect for me. 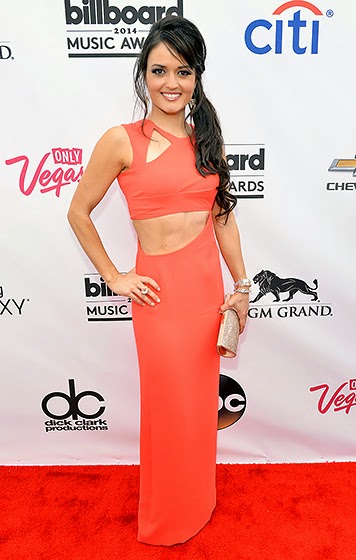 Danica McKellar - Can someone please explain how Winnie Cooper got an invite to this thing?  Does she make music now?  Whatever.  I like the dress okay.  The color is perfect for her and the cutouts are kind of fun, even if they're not symmetrical and her abs are making me feel bad about myself (which is of course a win for her).  You know what's not a win?  The overly gelled, sprayed and moussed hair.  It's a bouffant gone bad and me and my flabby abs are taking great solace in it. 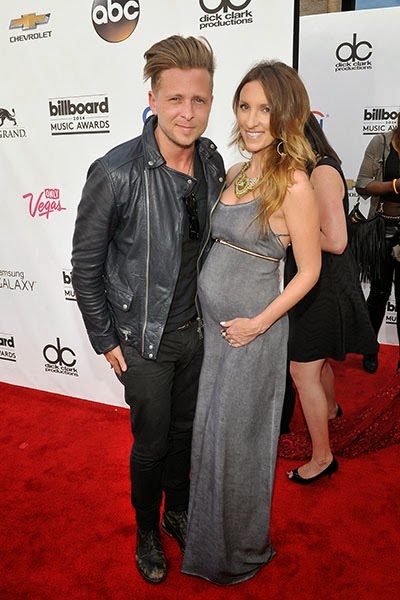 Good lord. There are a lot of options for preggos these days.  Why choose a gray sack?  That's all I wanna know. 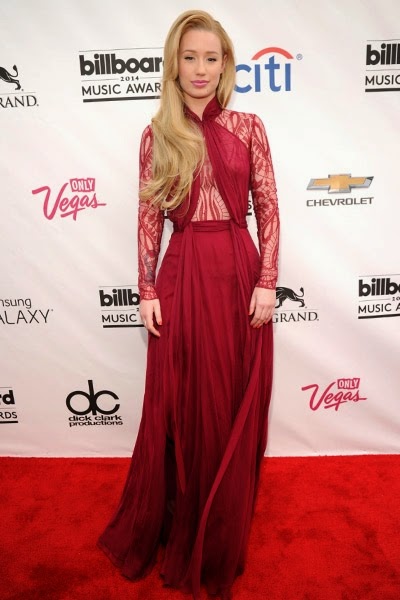 Iggy Azalea - This could have been so good.  But no.  It looks like someone raided Jem's closet and then tacked on extra fabric and a collar. 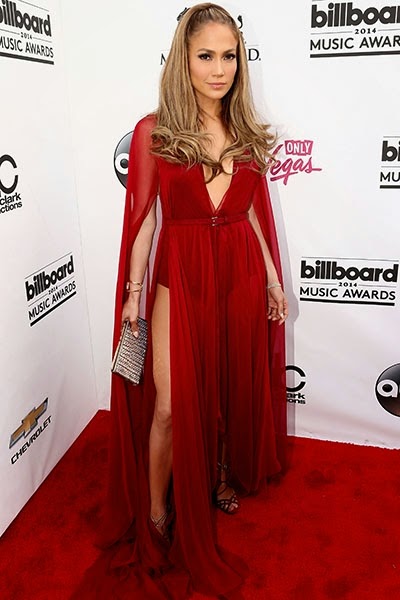 J.Lo - Why does her expression always read, "That's right, peasants, bow down before your queen."?  She's even wearing a cape, though it's paired with - let's be real - underpants.  How does one decide that they'll not be wearing pants but they will be wearing what amounts to a cape?  Amazing.  And not in a good way. 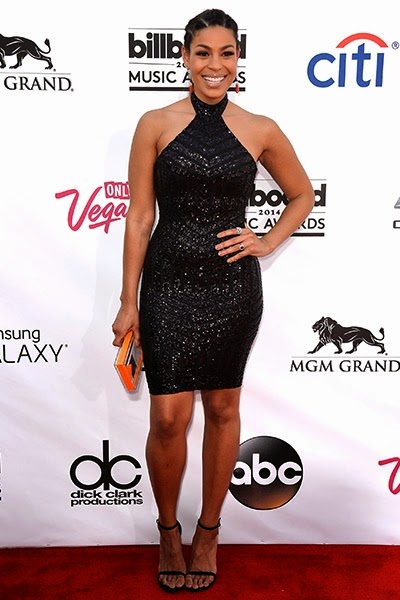 Jordin Sparks - Are you ready for the firm's annual holiday party?  You know Gladys in reception makes the BEST spinach dip!  They always have it catered because it's the classy thing to do but Gladys will still bring her dip and you will DIE! 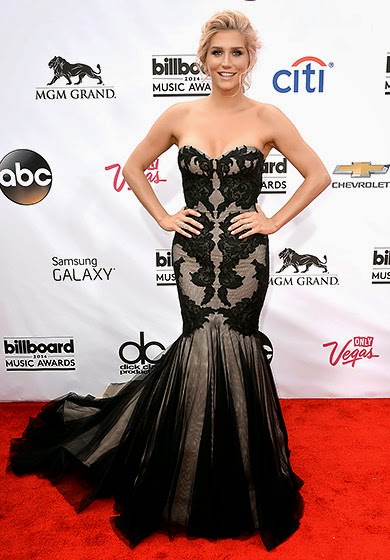 Shakira - I'm trying so hard not to be too judgmental.  But you know how I hate lace.  Even lace like this ages one perceptibly.  Also, from her knees up it looks like she's having trouble breathing.  Maybe next time get one in your size? 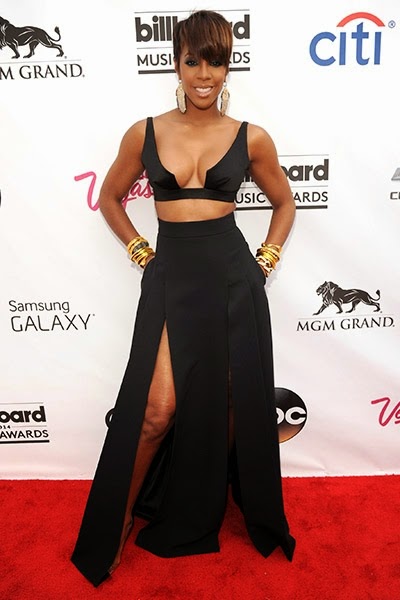 Kelly Rowland - still trying to prove she doesn't need Beyonce to have a career. How's that going for you, Kelly? 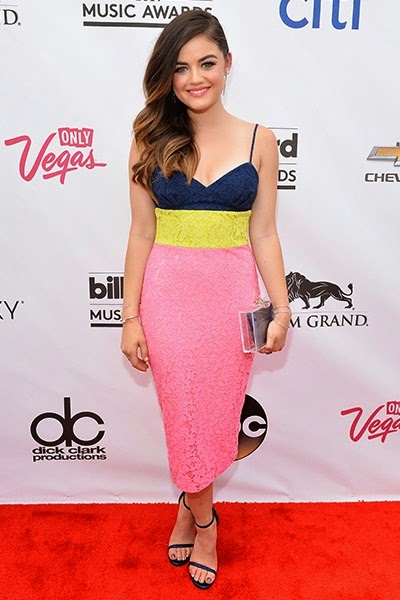 Lucy Hale - I'm having flashbacks to Zoe Saldana's Pastel Parade of Misery.  There's so much wrong with this I'm not entirely sure where to begin.  Can we all just agree that three colors is too many and interesting isn't the same as beautiful. 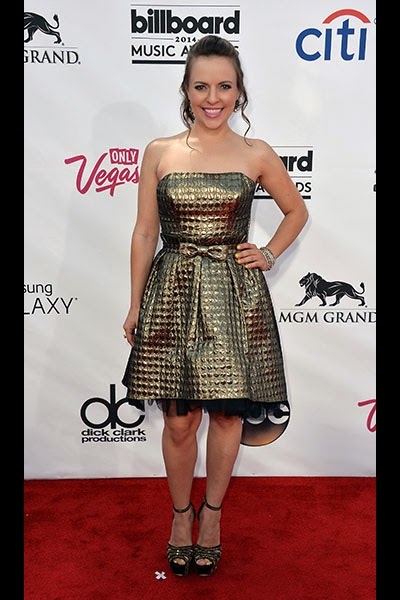 This almost had me until I saw the bow at her waist. Grown women who wear bows make me clench my teeth.  On the other hand it fits her, it's not overly stupid or trying too hard, and she made an effort with her hair.  Kudos? 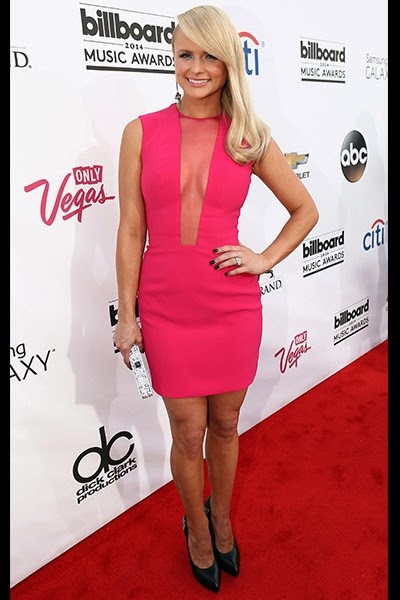 Miranda Lambert - First, you're welcome, Miranda.  Remember a few award shows ago when I said the military could land planes on your forehead and what you really needed to look into were side-ways bangs.  Well, you're welcome.  HUGE improvement!  Now, as for your dress, I can't say I love it.  It looks like something Julia Roberts might have worn in Pretty Woman if she had been an ice dancing hooker. 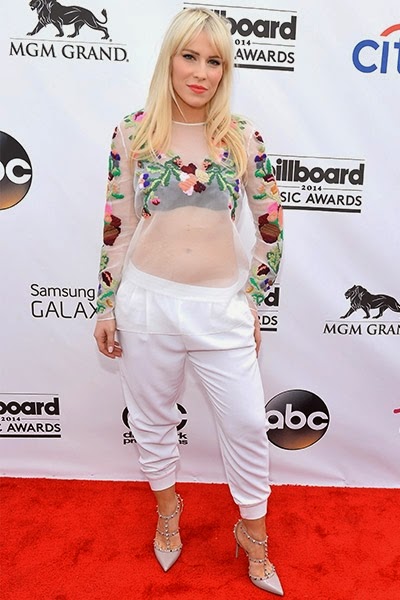 Sienna Miller? - I honestly have no idea who this is but it sort of resembles Sienna Miller (whenever I say her name I always, always want to include a Burnt before the Sienna).  She has been known to make seriously crazy fashion decisions so let's just all agree that this is poor (Burnt) Sienna.  (Burnt) Sienna decide to wear ill-fitting capri sweat pants with a see-through top appliqued with flowers.  I'm describing it to you even through you can see it because I want you to think about this.  She's basically wearing lounge wear that doesn't fit to a formal event.  Do we condone behavior like this?  No.  No we do not. Bad (Burnt) Sienna! 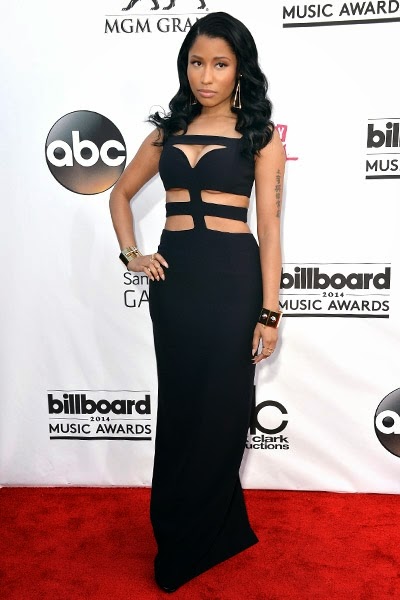 Nicki Minaj - Poor girl.  Even she looks sad at this very bad decision.  It's the most conservative we've ever seen Nicki and she still looks pretty terrible. Her hair is fine but no lippy?  And the dress could have been fine if it had been a color and/or the cut outs had been left in.  No one wants to see that much of your lady-parts. 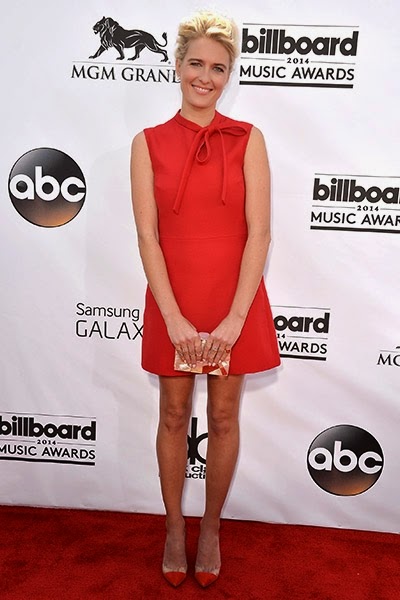 Peggy Olsen called.  She needs her dress back and she wants you to stop texting Don.  He's not interested. (Yet.) 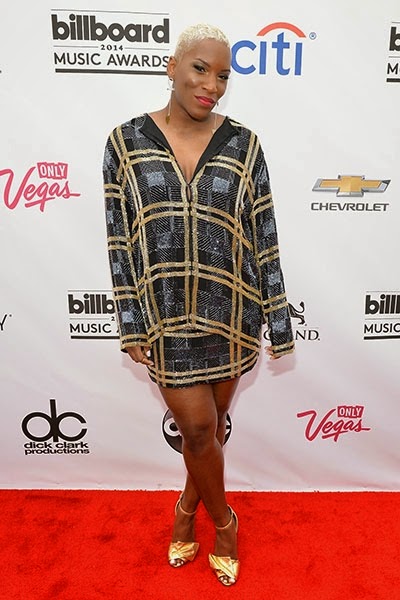 So, let me just get this straight.  It's a two piece made of sequined plaid?  And you thought it would be a good decision why? 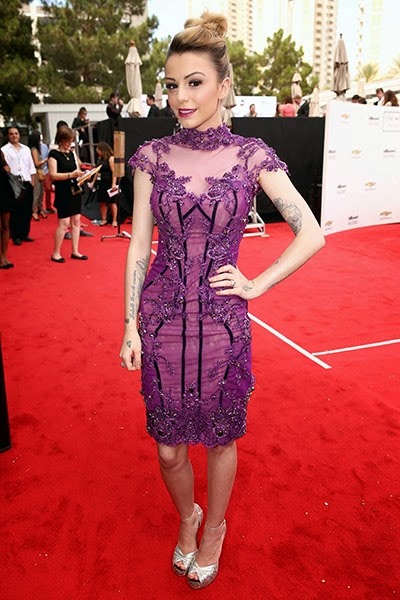 Overly precious, party of one. 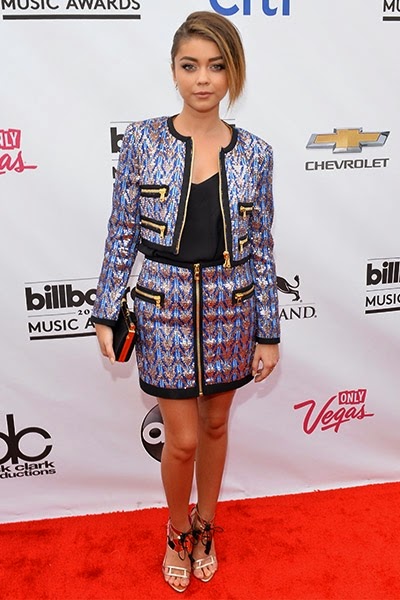 Sarah Hyland - Okay, don't get me wrong: I love a good Chanel suit.  The thing I don't love is the jangle of zippers as I walk through life. also, it looks a little boxy, like it's so stiff (maybe from all the metal?) that sitting is uncomfortable. 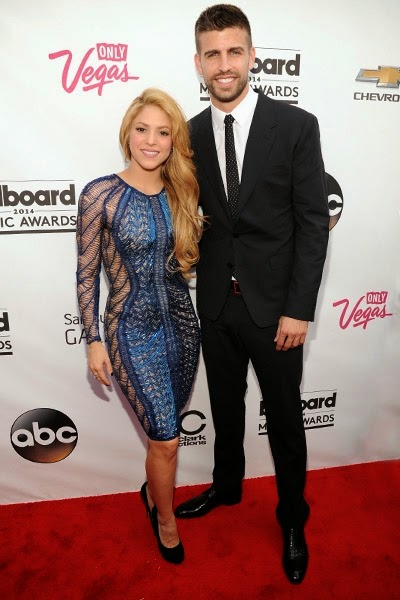 Shakira (I keep typing Sharkira on accident and it's so fun) - This too might be the most conservative we've ever seen her. Unfortunately it's also still pretty terrible.  It reminds me of that great safety pin dress that Elizabeth Hurley wore in the 90s.  It lacks that dress's character, though. 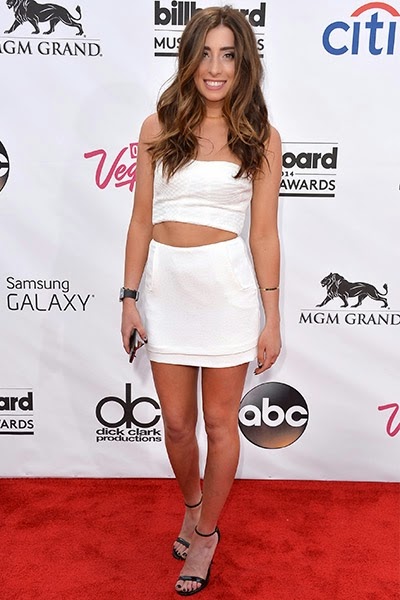 I'm going to sound like her mother, I'm sure, but...is it supposed to be ill-fitting?

Okay, here's the bad news: I'm not sure I see a Best In Show.  For real.  It's never happened before.

The good news is that there are so many Worst In Shows to choose from, I'm going to let you do it!  Which do you think is the absolute worst?  Leave your opinions in the comments and I'll post the winner (loser) at the end of the week.

Who do you think will get the most votes for Worst?  The suspense is killing me!