Okay for the most part I'm just as clueless about the Tony's as I am about the Grammy's.  For as much as I adore musical theater I just don't know the names the way I do for TV and movies.

Also, confession: I meant to watch them last night...and then totally didn't.  I was busy learning about Taystee's business acumen and talent for rote memorization. (If you're not watching Orange Is The New Black you're CRAZY!) 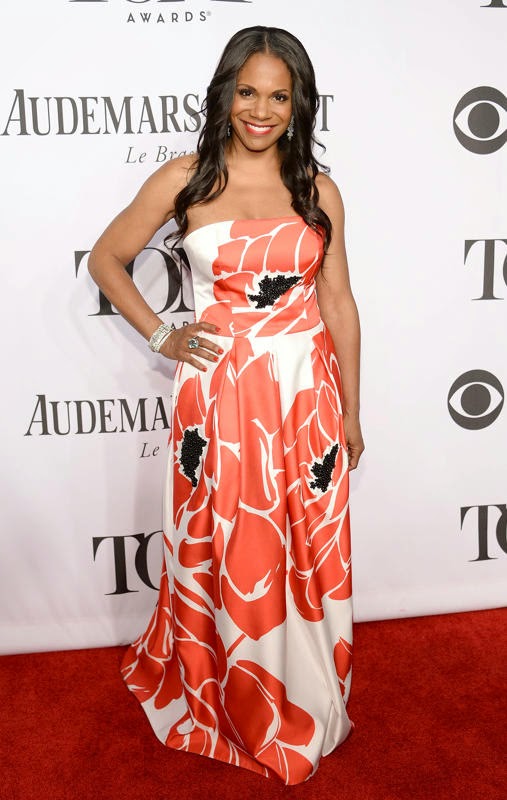 Audra McDonald
I saw her at Carnegie Hall last year and she was divine.  This dress is not quite as divine.  I feel like it could double as wallpaper somewhere moderately fancy.  Also, is her hair kinda super flat?  Still, love the guns, love the understated jewelry and praise heaven, she's wearing lippy! 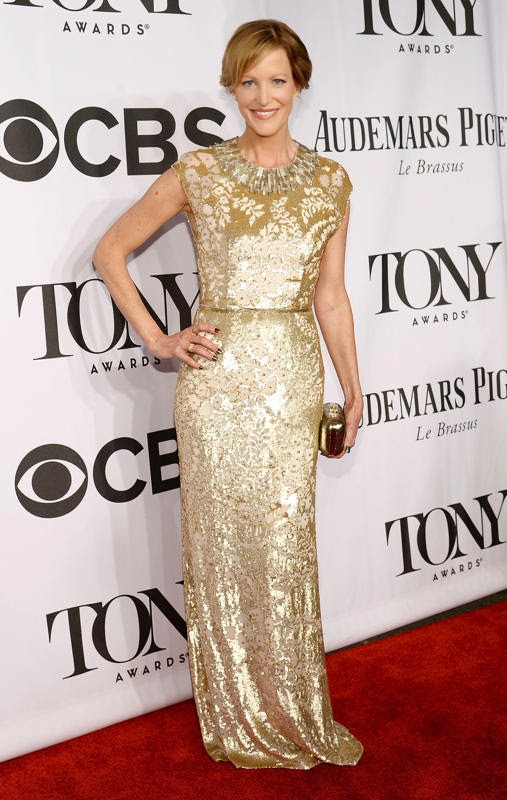 Anna Gunn
This reminds me of something out of the pages of a fashion mag from the 40s.  I wonder if it was a nod to the 70th anniversary of D-Day.  Either way, with one tiny misgiving about the waist-line (is that an actual line?  Why?) I'm going to give this pretty high marks.  The champagne color is exquisite against her skin and whatever that thing at her collar is (necklace? appliqued beads?) it's awesome.  I do kind of wish it had been a solid champagne instead of the ferns growing with abandon across her chest but whatever. 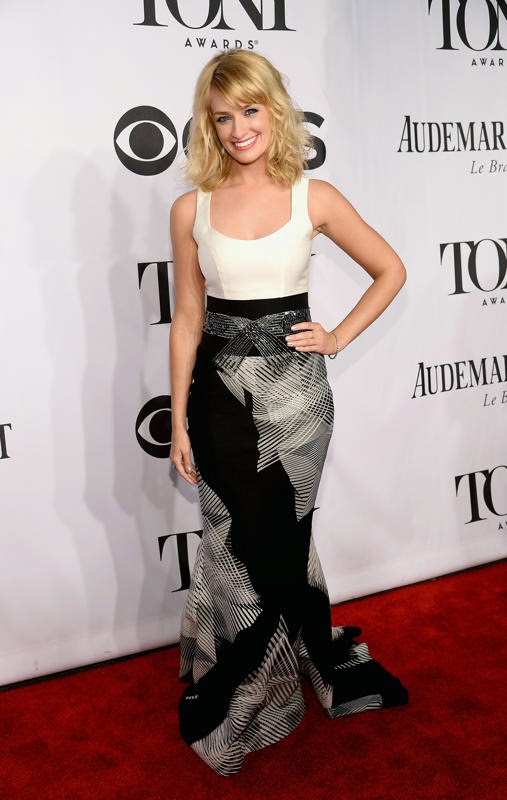 Beth Behrs
I have no idea who she is but I'm going to go on record and say that this could have been better.  It looks like she pulled on a fancy skirt and then paired it with a white tank top.  Also, what is the weird sparkly belt around her waist?  Not feeling it. 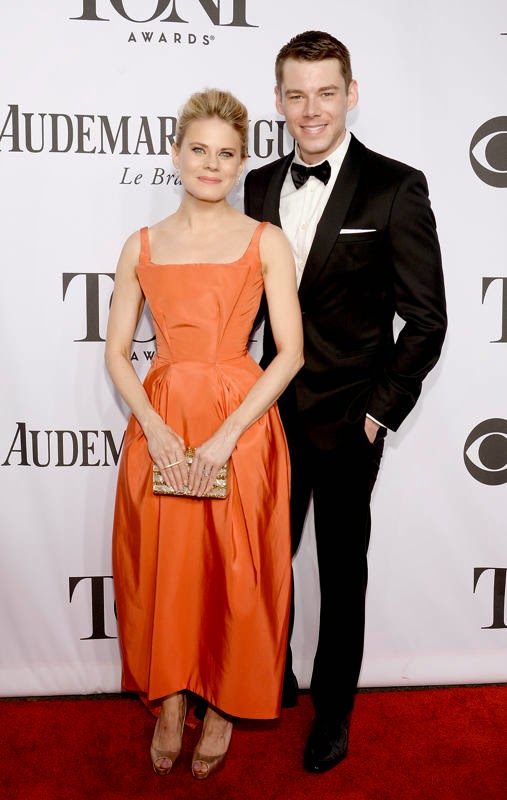 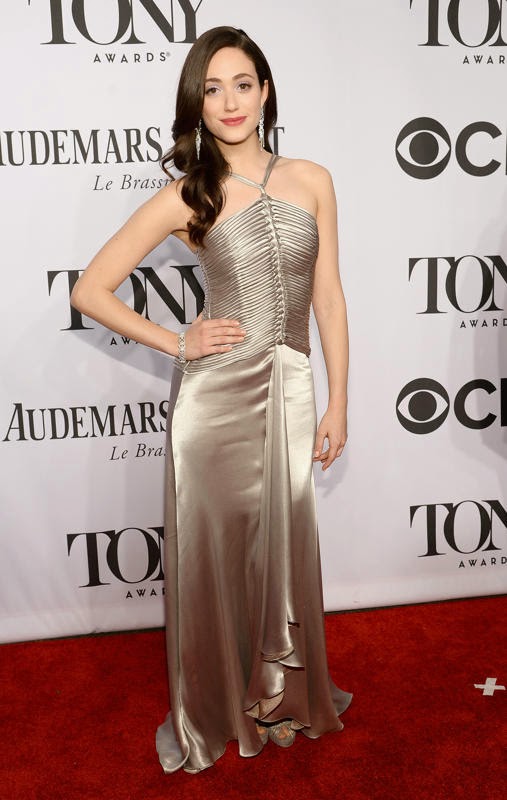 Emmy Rossum
I really want to like this.  No, really.  I think my biggest problem is that the top half and the bottom half don't seem to match.  It looks like she's wearing a metal breastplate to an awards show.  Emmy, armor isn't hot, it's just heavy and prone to rust. 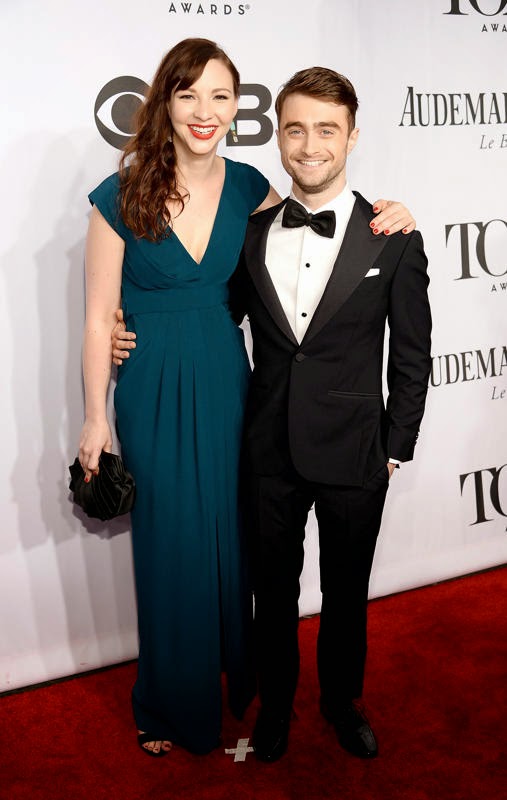 Erin Darke, Daniel Radcliffe
Apparently, this is Harry Potter's girlfriend of two years and he's just now FINALLY let her tag along to a red carpet.  I'll give you one guess why.  (Hint: it has something to do with how perfectly he could rest his head on her shoulder.)  Yes, I am a mean girl.  Other than the hilarious height difference, I love her dress.  It's a good color, it fits her well and they seem really happy (even with her slouch - I mean, what else can she do?). 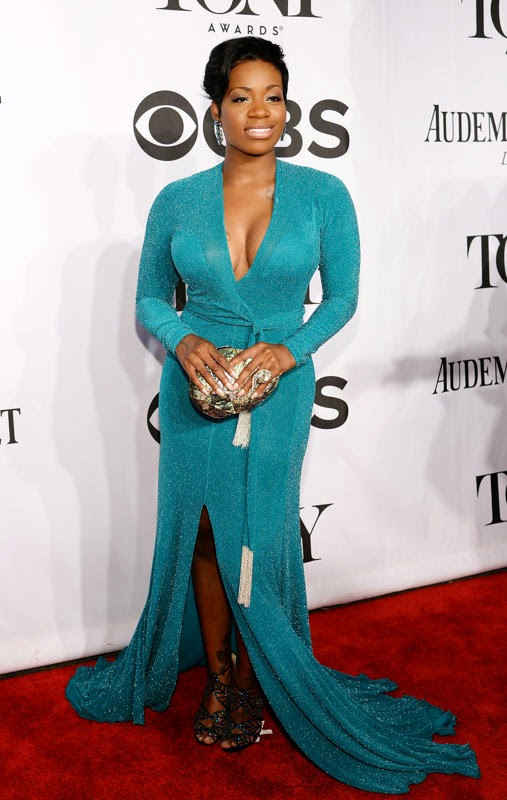 Fantasia Barrino
Okay, first, the color is great.  And, the fabric is also really great.  I love the tiny sparkle.  I also love the silver fringe of the ties holding things closed.  Like a sexy bathrobe. 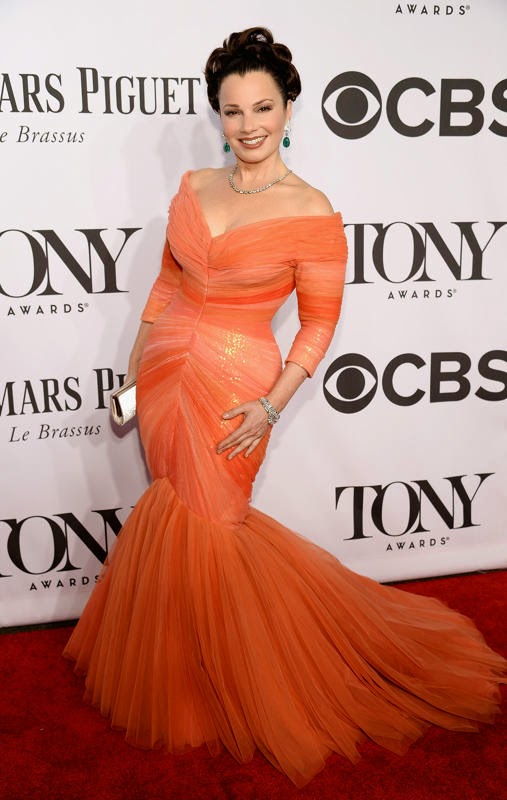 Fran Drescher
I have such mixed feelings about this dress. Normally you can't go wrong with a mermaid cut but the tulle at the bottom is really distracting.  I wish the skirt had been a column. As for the top I love the three-quarter sleeves but I don't love the radiating beams from the center seam.  It looks like something Barbie might have worn to a charity benefit she and Ken attended one year. 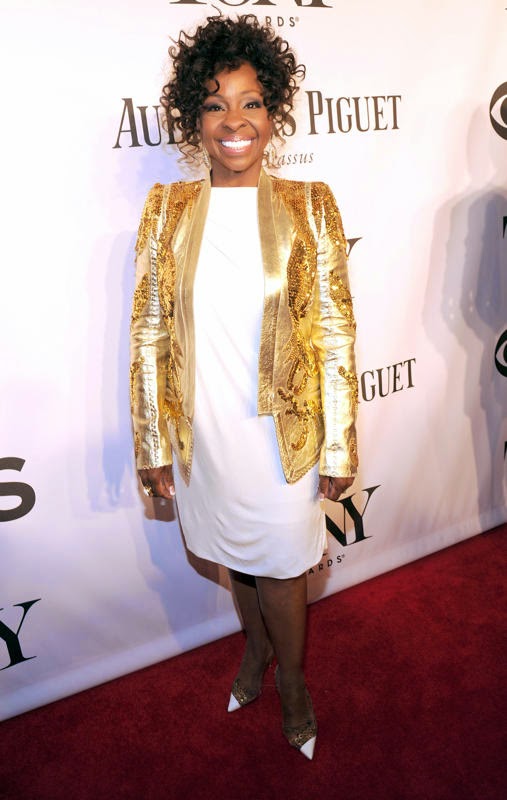 Gladys Knight
True story: when I lived in Savannah, Gladys' song "Midnight Train to Georgia" would come on the radio with some regularity.  Before too long I'd created new lyrics and I'd sing along, loudly and with great relish, advising her to STAY in California.  I wish this outfit had stayed in California.  Since when is a white shift appropriate awards show attire?  Even if it is paired with an ill-fitting jacket pinched from Elvis' closet? 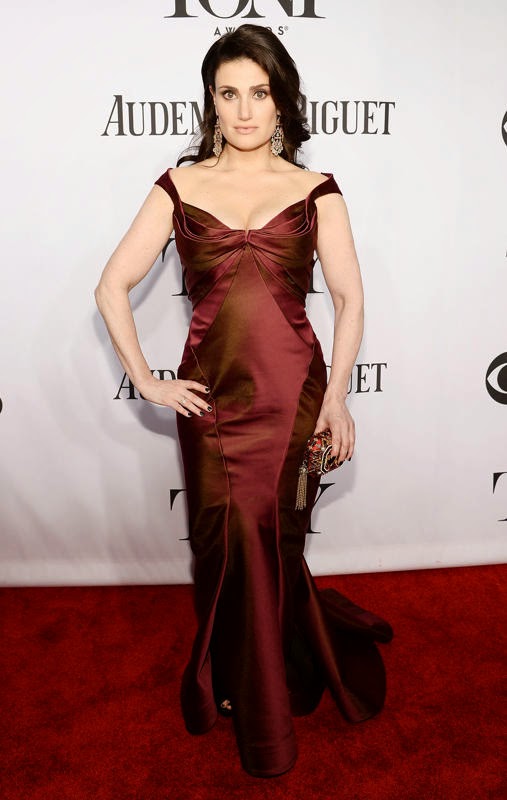 Idina Menzel
First, a word about her face.  Why do actresses make this face at live events?  I can understand at a photo shoot when the guy is yelling at you, "More, more! Now be a cat!  Now a rape victim!"  For years my friends and I would call that one Celine Dion album, the Rape Album because of her traumatized face on the cover.  Did Idina just run into Audra and they had to make weird small talk over Taye Diggs who is Idina's real and Audra's fictional ex-husband?  Okay, I'm done with the rant, now for the dress.  Mostly, it's a great color.  I love a deep, dark red, but is it a little metallic-y?  I feel like the shimmer is a little on the orange side.  I also love the cut.  It's sexy and feminine but still slightly demure with those little off-the-shoulder caps. 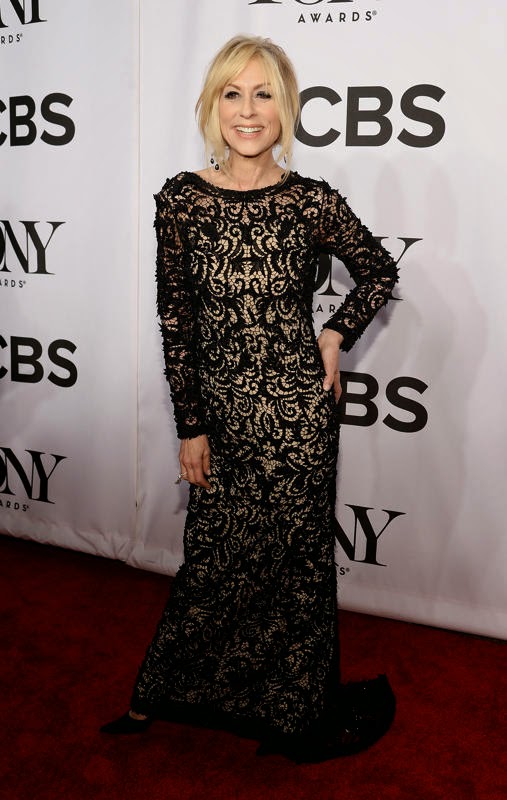 Judith Light
I seriously almost didn't recognize her.  Remember how huge Angela Bower's hair used to be?  Maybe it's the hair, but her face looks different, too.  Did she have work done?  (Is that a stupid question?)  The dress is kind of a snooze fest.  The least she could have done was make it a cowl neckline and cut the sleeves to three-quarter.  And the lace, my god the lace, Mrs. Bennett!  (ten points and an air kiss to the person who gets that reference.) Talk about adding age.  Ladies, if you want to seem young, avoid looking like a doily. 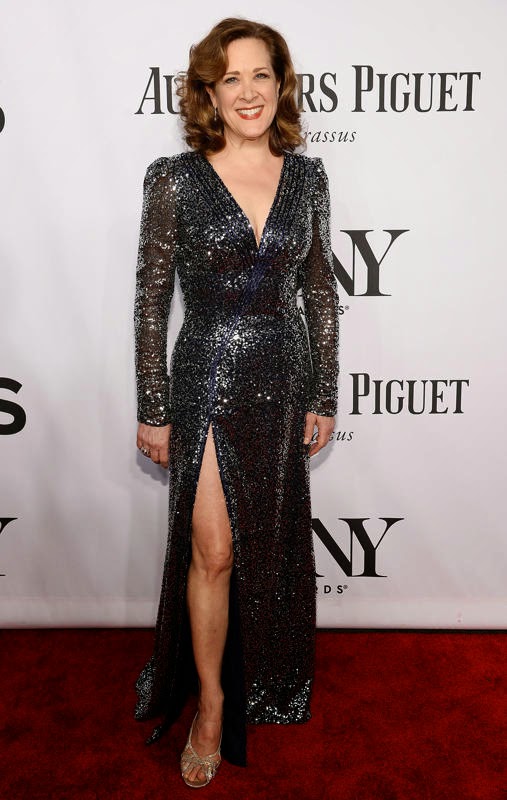 Karen Ziemba
I have no idea who this is but I kind of like what she's wearing.  It's very Joan Collins but in a fun, kicky kind of way.  Everything fits, she's showing some skin, showing off some great shoes, her hair is nicely done and she looks poised and happy to be where she is. 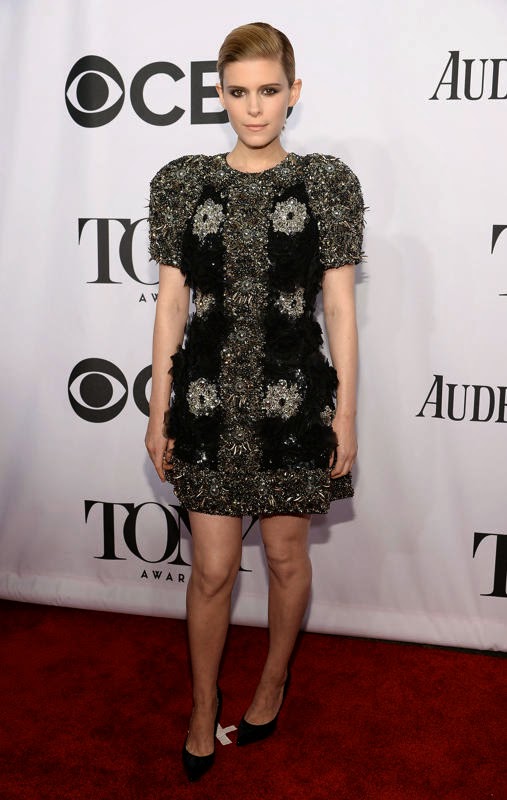 Kate Mara
As big as those shoulder pad are, I'm not sure Joan Collins would approve of this little number.  Is it me or does it not seem to fit very well? 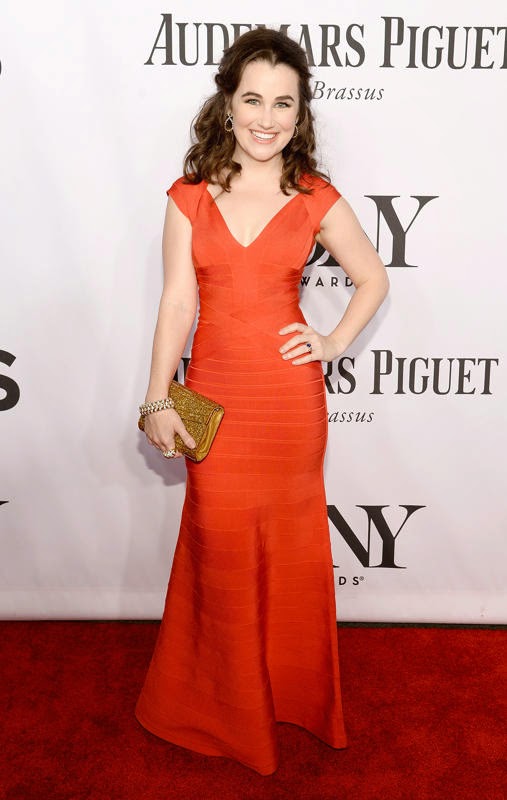 Lauren Worsham
This is pretty fabulous.  The exception that proves the rule about never wearing horizontal stripes.  She is killing it.  Great color, great cut, love the capped sleeves.  It looks comfortable and easy.  Also, great accessories and hair. 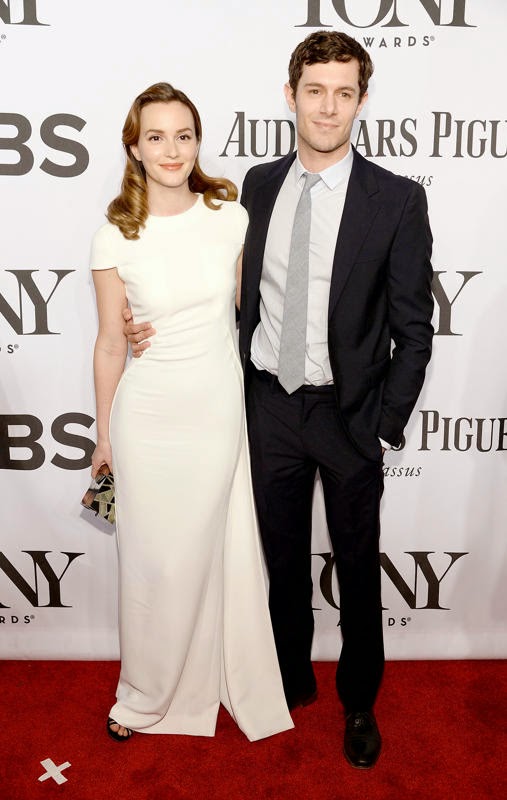 Leighton Meester and Adam Brody
Are they a thing now?  Is my handle on celebrity gossip somehow slipping?  How did this happen?  Her hair is great but it's somehow so wholesome that while her dress doesn't necessarily scream bridal, it, combined with the hairstyle, made me thing she might be holding a bouquet down there in her right hand.  Tell me I'm wrong. 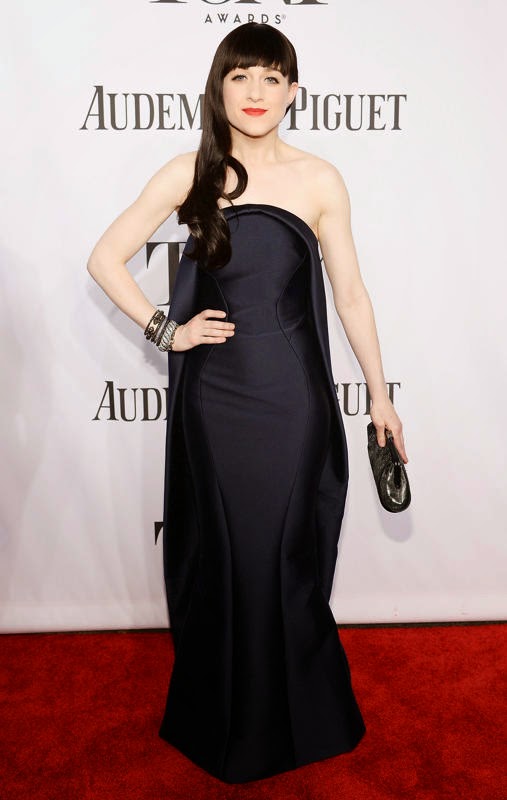 Lena Hall
What the hell is this?  She looks like Morticia Addams on a fancy night out. 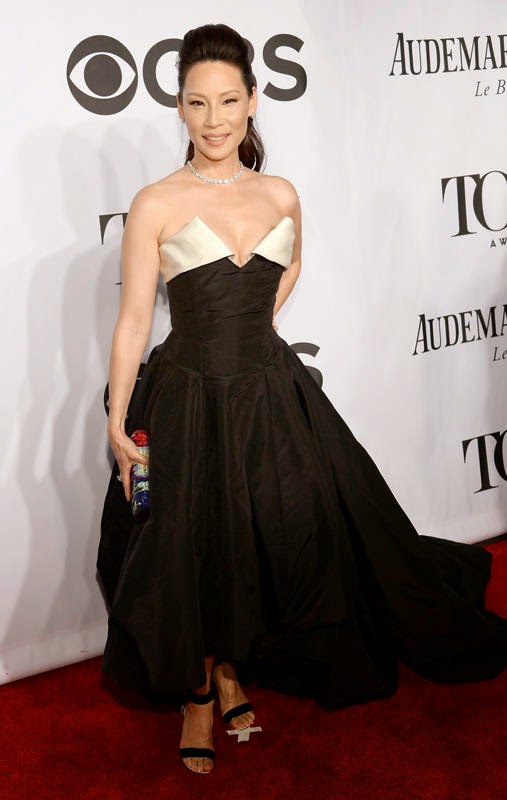 Lucy Liu
This seems very inspired by the 50s and Elizabeth Taylor.  The bodice is a bit more than E-Tay (look at me making up celeb nicknames for the deceased) would have thrown around but overall I like it a lot.  The white edging hints at a tuxedo and her string of diamonds is sleek and sophisticated. 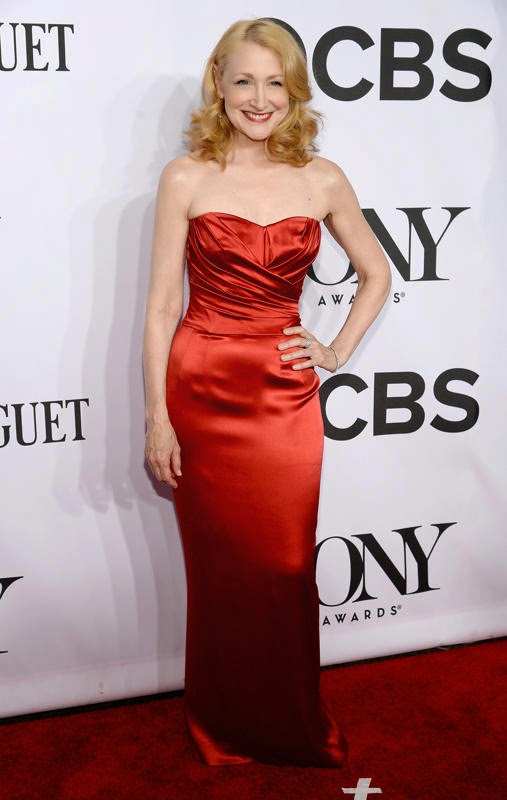 Patricia Clarkson
Great color, great cut.  The bodice looks a tiny bit too structured but I'm not complaining.  I love this broad! 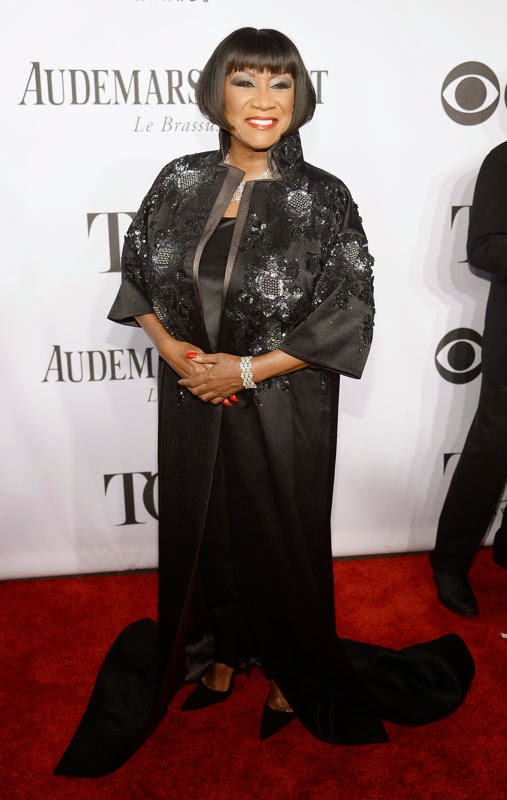 Patti LaBelle
From her neck to her ankles she looks perfectly respectable.  From her ankles down it looks like the dress is trying to do a Flying Nun impersonation. 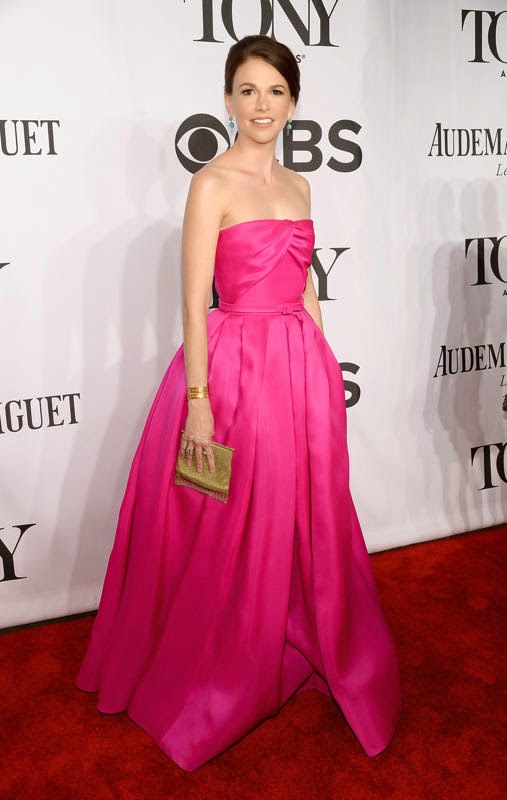 Sutton Foster
I have SUCH a girl crush on Sutton.  Did you watch that ABC Family show she was in, Bunheads?  I still go back and re-watch the scene where she teaches Ginny how to audition.  What a talent.  Also, I'm loving her look.  It fits, it's a great pop of color, and her accessories are modest and simple.  Well done! 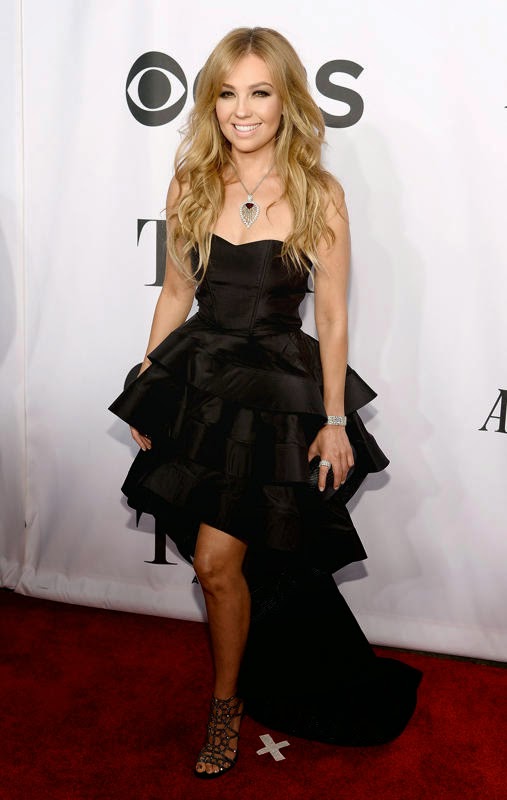 Thalia
I don't know who this is.  Sorry.  I do know I'm almost never sold on a mullet dress.  In this case there's so much else going on that I almost didn't even notice it.  How much peplum does one dress need? 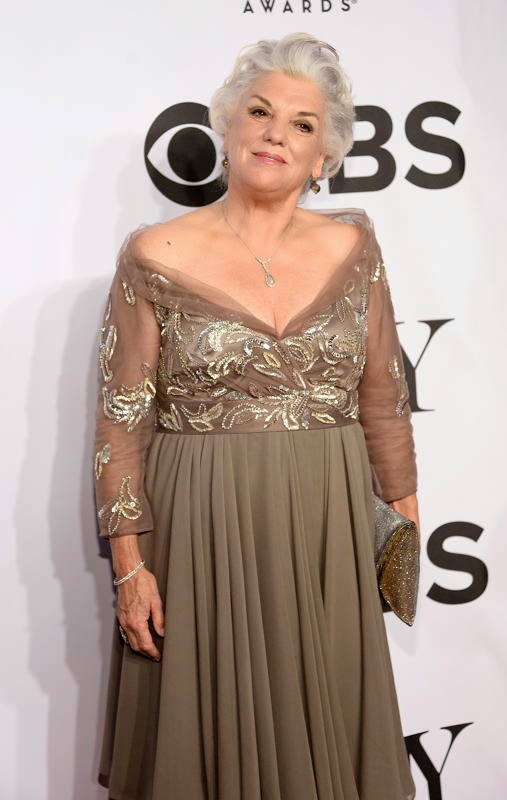 Tyne Daley
I like this.  It's age-appropriate but it doesn't scream old-lady.  It's something Helen Mirren would wear and we all know that equals a big thumbs up from me. 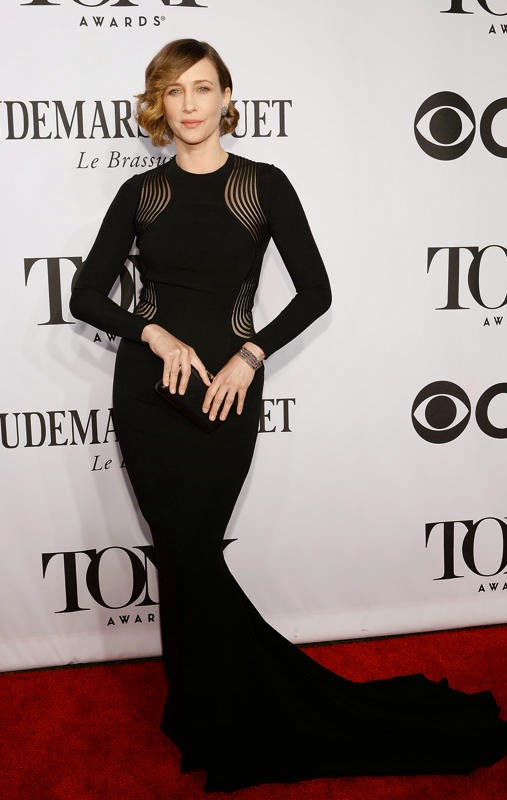 Vera Farmiga
Okay, I take it back.  THIS is what Morticia Addams would wear on a fancy night out. 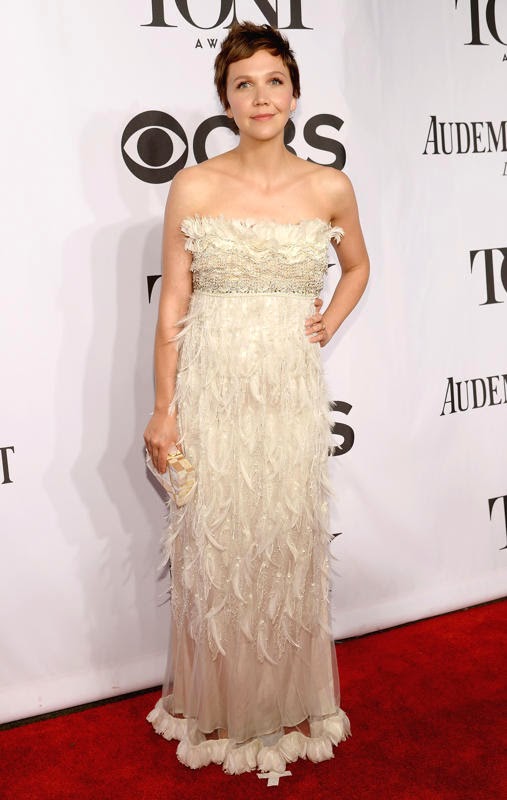 Maggie Gylenhaal
Tell me.  Will there ever come a day when I see a pic for Maggie at an awards show and NOT want to bang my head against a wall?  Do you think she reads this blog and purposely chooses gowns so ill-fitting that they'll make my head explode?  This looks like Bjork's swan dress did explode, or at the very least molted.  Also, maybe head to the Clinique counter on award show days and get your make up done.  This make-zero-effort shit has got to stop. 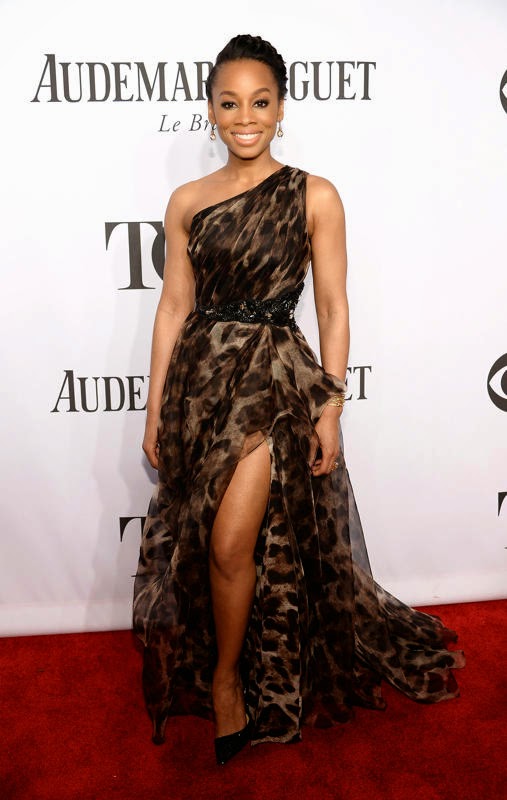 Anika Noni Rose
Okay, confession.  I seriously feel like Anika is one of the most underrated actresses out there.  She was one of the Dreamgirls and though she could have been completely overshadowed by either Jennifer Hudson or Beyonce (let's face it, would COULDN'T be completely overshadowed by either or both of those ladies), she turned in a really solid performance.  Then she went on to be sidekick to Jill Scott, someone else who could have completely overshadowed her, in the HBO series No. 1 Ladies Detective Agency, and again she killed the performance. Since then she's been kicking ass and taking names on the big screen and the small and every time I see her she looks gorgeous, really well put together, and completely radiant. She's showing some skin but she's not giving away the farm.  The gown's wild side print is tempered by the fact that it fits perfectly and her hair is sophisticated.  In my humble opinion she looks completely FREAKING awesome.

And that's it, Possums!!  Love and kisses until next time!